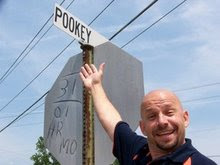 While I was busy brooding in my cryogenic chamber, Rick Portier decided to come out of seclusion. It was but a month or so ago the Baton Rouge raconteur pulled his popular Turdpolisher blog, depriving his regular readers and sending your own lenslinger into something of a storytelling tailspin. Thanks, fella! Ever since you closed down shop, I been questioning my every other word - a very bad habit which makes finishing a sentence virtually impossible when you sit down to consider how such a notion would ever seem the least bit troublesome in the first place. See what I mean? But enough about me. This is about Turd’s triumphant return to the blogosphere. In his initial post, Rick explains how a sudden corporate interest in his off-hour missives left his muse feeling shackled. Fearing his archives would be further plundered by his higher-ups, the veteran photog and family man dismantled his site and sought the proper penance. Now, he’s back - promising wiser fare and a kinder, gentler blowtorch. Best of all, he’s named his new site FIL-TURD, a moniker so fitting I only wish I’d thought of it. Glad to have you back, Rick. As I told you over the phone, you’re a talented enough writer to flex your voice without puttin' your genitals in a vice. In a perfect world you shouldn’t have to censor yourself, but we’ve both spent enough time squinting through a lens to know which end of the optical tubing to press one’s cornea firmly against …Damn, I’m doing it again! Hopefully, Rick’s return will align the Cosmos. I’ll read his stuff, wish I’d though of it and conjure up something in return. After all, a little competition can be a generally pleasant set of conditions under which to find one’s self in. ACK!!!
Posted by Lenslinger at 7:54 PM

thanks slinger, i'd hate to see your cranial constipation lead to a full-blown pipe jam. imagine all the shit i'd take for that one.

for now, the blog will probably be a lot like a game of turtle. i'll poke my tapered end out see who's around, and dart back to the comfy confines of the old food incubator.

thanks for the love.