Gripes of a Lifer 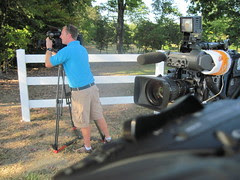 Hey, I'm all for steady employment but to be honest, I've been at El Ocho for about a decade longer than I planned to. How that happened is a long story, one involving children, crabgrass and a wife's steady paycheck. But who am I kidding? I love it here! And as long as The Suits let me cover the news sans meat-stick, I'll gladly hang out (until I hit the lottery/get a book deal/witness The Rapture.) Still, even we lifers gotta wonder if we've stuck around too long. Thus, I give you...

THE TOP 10 SIGNS YOU'VE WORKED IN YOUR CURRENT MARKET TOO LONG...

10) You know the competition's live trucks by their in-house nicknames.

9) You remember taking that manager lady out on her first story - when she was an intern.

8) You've got six generations of logowear hanging in your closet and you don't wear any of it.

7) By the time you learn the new reporter's name, it's time for his going away party.

6) You give directions based on decade old crime scenes.

5) Former colleagues keep up with their old station by following your blog.

4) You remember when this place had a travel budget.

3) All the local sheriffs know your name, but they still forget it whenever the hot new weather chick shows up on scene.

2) You've seen scores of coworkers come and go - and you actually miss a few of them!

AND THE NUMBER ONE SIGN YOU'VE WORKED IN YOUR CURRENT MARKET TOO LONG...

Ever have one of those shoots... 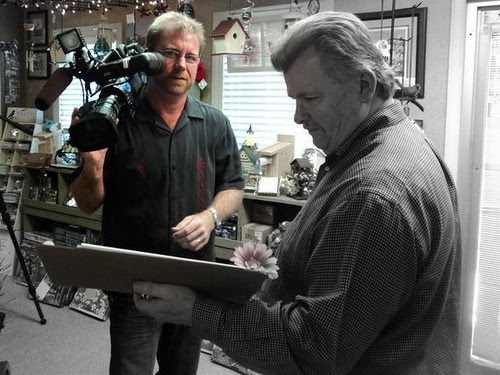 ...where you just wanted to hand out paper bags for everyone to breathe into?

...where you were haunted by vivid flashbacks of your less than illustrious commercial production career?

...where you really began to regret all that fun you had skipping class in high school?

...where you had to physically fight the urge to set the camera down, run run the room, climb the nearest utility pole and start bellowing nonsensical Doors lyrics?

...where you found yourself wondering if it was finally time to launch that pro bowling career?

...where you decided it would be more fun to be tazed in the crotch by an over-caffeinated SWAT cop than continue this little production?

...where you realized it's these kind of exasperating assignments that will finally convince you to start writing that book?

...where you yearned for the monastic existence, comparative glamor and hip wardrobe of a lighthouse keeper?

...where for the first time since the Reagan Administration, you actually prayed for spot news?

Well, I have - and judging from the above photographic evidence - I'm not as good as hiding my thoughts about it as I used to be.
Posted by Lenslinger at 10:54 PM 3 comments:

One in Every Herd...

I cannot begin to explain why this young fawn decided to move in with a herd of neighborhood cows, can't fathom why someone would actually call a TV station to report it, can't come up with a good reason why I pounded a half gallon of Guatemala's finest coffee on my way out there. All I can really tell you is that the Ginns family of Stokes County are indeed lovely people, that it somehow pleased the News Gods for me to be there and that a forty-three year old television news photographer can shoot a pretty passable story all while doing a wicked 'Pee-Pee Dance'. See if you can spot the moment where my sclera turned yella... 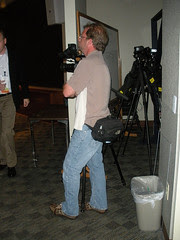 Once upon a time I led a session or two at ConvergeSouth, the semi-annual web-head summit that takes place right here in Greensboro. This year, I just showed up and started rolling. It was a lack of tactics on my part; having meant to attend but never bothering to register, I promptly forgot about the damn thing until Friday morning. That's when a series of newsworthy events failed to happen and I found myself surrounded by producers annoyed that I was still in the building and blocking their view of The View. It was then I glanced at my Twitter page and saw news of the steepening think tank at North Carolina A&T State University. Knowing I’d have to somehow squeeze ninety seconds of TV out of a room full of computer geeks, I headed over anyway. After all, these are my people! 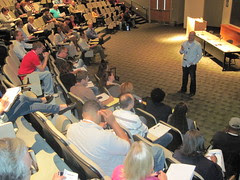 Once my eyes adjusted to the cavernous classroom, I found myself staring at a bunch of strangers. They weren't staring back, of course. Rather, their collective gaze was fixated on their laptops, their Blackberries, their iPads. Hey, this IS a tech conference! Giving the speaker one's undivided attention is Two Thousand and Late, anyway. Besides, what fun is it to hang with the techno-crowd if you can't electronically notify your disciples that you are in fact, hanging with the techno-crowd. Don't answer that. Just know that as I scanned the crowd, I did spot a few familiar faces. Polinsky, Wharton, Ainbinder, Hwang... Fine folks all the way around, but barely a fraction of the insatiable communicators that founded this gathering five years ago. 'What happened to the old gang?' I wondered as I trudged up the stairs. Did politics ruin the fun? Did infighting trump future-speak?

Is the McRib really back to stay this time? 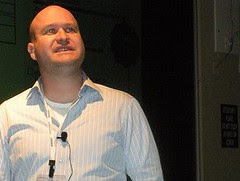 I never found out, for no sooner did I grow bored with making smart people nervous than the keynote speaker captured my attention. More on him in a minute, but can I just tell you potent a tool even the crappiest TV camera can be? For example, an auditorium full of forward-thinking early adopters with heavy disdain for mainstream media and a raging gadget habit will STILL run their fingers through their hair whenever a fancycam is pointed their way. Anarchists, assassins, ar-teests ... no matter the mindset it's just human nature to sit up a little straighter whenever some camera-schlub cranks up the ole vanity-enhancer. If that weren't enough, nine out of ten audience members were absorbed in their Twitter feeds. Cradling my own mobile device (once called a "phone"), I knew that with a single hashtag I could plant my thoughts on the screens of the very folk who were clocking me out of the corners of their collective eye.

'Is it just me - or is the cameraman gassy?', I wanted to tweet, but sadly lacked the grapes to hit SEND. 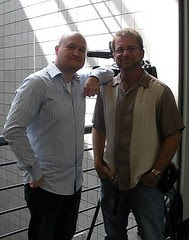 Besides, it was too late for my tomfoolery - for by now the keynote speaker was really hitting his stride. Looking down at the program, I saw his name: Brent D. Payne, SEO Director. 'Cool', I thought - not entirely sure what SEO stood for. Turns out, it's Search Engine Optimization, a concept a needy narrator type like myself can really get behind. So could everyone else in the auditorium apparently, for folks actually started glancing up from their screens every now and then, before muttering to themselves and changing their status updates for the twelfth time in so many minutes. Not that Brent D. Payne minded. Dude was used to it. Listening to him run through surefire ways to increase your web-traffic, it occurred to me he'd been semi-ignored by classier crowds that this. Then I started tweeting tips myself, knowing that if I followed my new hero's every rule, I'd be overseeing a media empire to rival Howard Stern's, instead of sitting here nursing a cocktail and talking to you...