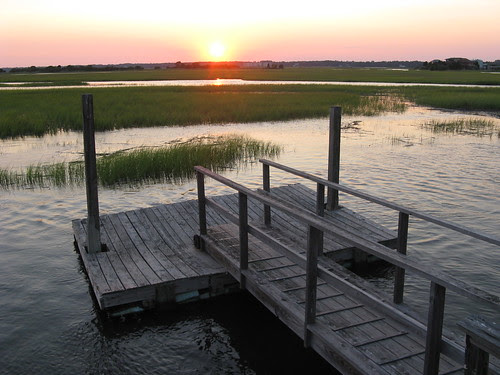 Enough politics, let's talk about the weather. Here on the Carolina shore, it's nearly perfect - though the returning humidity is enough to wilt that beach umbrella you schlepped in from the cottage. Speaking of schlep, it won't be long until I'm back under the yoke of my own Sony and sticks, traversing the foothills in search of broadcast flotsam and newscast scraps. Oy. Still, if I stayed on the coast forever I'd turn into one of those leathery, shirtless types you see stumbling through the surf every so often - a frothy fate the women in my life say just ain't gonna happen. Sooo, I'll soon pack my sandy brood into the evil SUV and head uphill, poorer for the expense but richer for the experience. Just don't expect a savage tan, as I'm of Irish descent and covered in fur. Too Much Information I know but it beats watching a middle-aged Sasquatch wallow in the undertow. Now if you'll excuse me, I got nine Coronas I gotta drown. Wife says they won't fit in the car and I'm not about to leave them to the deadbeats who'll soon be lounging in my favorite deck chairs. Now bring me my limes! 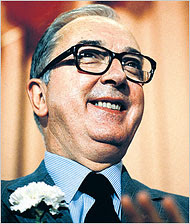 I was picking up subs at a surfside deli when the TV in the corner caught my eye. Onscreen, a horn-rimmed and dark-haired Jesse Helms clutched a podium as he railed against something or another. I grabbed some extra napkins and headed for the door, happy again not to be in the newsroom. But back on the beach, I found I couldn't escape the shadow cast by this man's passing. Jesse Helms: polarizing patriarch, Southern-fried icon, one-time face of the Old North State, patron saint of racist assholes everywhere. Were it only that simple...

I came of age in the 80's. By then Helms was a local legend of course, but in my little circle of dirt I didn't give him much thought. Never all that politically astute, I lived a full, young life without ever forming an opinion on him one way or another. It wasn't until later that I realized my least favorite playmates called him 'Uncle' Jesse. Small-minded and ball-capped, the redneck junior set parroted the dogmatic bromides they no doubt heard at home. Dismissing them as simple, I was as convinced their hero was a cretin as I was certain that David Bowie was really, really, really cool. It wasn't until years later, however, that I realized how far Jesse's legacy had traveled. Fresh aboard my first Navy vessel, I found most of my shipmates from up North identified my beloved state with the laser-focused fanaticism of Senator Helms. Of course, I fought this stereotype by quoting Ziggy Stardust lyrics and deconstructing Andy Griffith episodes, but more than a few salts remained unconvinced.

Fast forward several years. Thousands of angry tobacco growers stormed the very steps nation's capitol in a nicotine-drenched protest of President Clinton's plan to hike the tax on cigarettes. There amid the throng of Carrharts and camouflage, a young punk with a fancycam on his shoulder paced, fidgeted and wondered why he wasn't allowed to use his tripod. Before I could figure it out however, the Friends of Tobacco lost their collective shit as none other than Jesse Helms stepped before the podium. On instinct, I centered my lens on him - but the sound of gnashing of teeth drowned out whatever message he brought the tobacco nation that day. Afterwards, Helms stuck around to shake hands and bless babies. Moving in, I shot footage of the Senator and his syncophants from just a few foot away until an opportunity presented itself. Signaling a print photographer friend, I took the Senator's hand in a friendly embrace and gave my best shit-eating grin as my buddy reluctantly triggered the shutter. I had great hopes for that photo, but my photographer friend never coughed it up. It occurs to me now he probably never pushed the button.

Less than eight years later, our paths would cross again at Senator Lauch Faircloth's campaign headquarters in Raleigh. It was election night and the avuncular Faircloth was getting his political ass handed to him on a hundred dollar plate by the far more telegenic John Edwards. The evening began as festive, with happy families clapping (almost) in time to a banjo-playing Uncle Sam band. But as the returns came in, the room went ugly. Soon the same pickled old ladies who'd just hours earlier toasted my lens, mouthed curses as I panned from them to the network feed of their defeat. With every update it became apparent to all that Lauch was going to have alot more time to spend with his grandkids. Smelling blood, even more camera crews arrived until the ballroom floor teemed with reporters, Republicans and other breeds of drunken fat-cat. Just when civilization threatened to collapse, a spotlight hit the stage and out rolled a gaunt and grinning Jesse Helms. The crowd began to mumble in tongues, acting in a manner I would witness one year later when another Jesse (by the name of Jackson) healed the woes of a hundred flood victims merely by showing up at their shelter. I didn't understand a damn word the marble-mouthed Helms said that night, but I credit his message with allowing me to escape unharmed.

And now, Jesse's dead. The pasty lawmaker with the familiar twang and wholesale derision of those unlike himself is explaining it all to his Maker. Try as I might though, I can't hate him. His naked campaigns against African Americans, Homosexuals and his political enemies still piss me off. But the Senator who rose to power on the strength of his rabid WRAL editorials has my begrudging respect - if only because of his mastery of the media. No North Carolina politician ever played the press as deftly as Jesse Helms. He knew his base and he knew how to get into their homes, their hearts and their hate. That doesn't make him any less misdirected, but it does complicate his canon. I'm reminded of a piece Neill McNeill and I produced recently on Helms' latest biography. During the interview, author William Link confirmed my suspicion that the Senator everyone loved to hate deserved more than plain vitriol. Then Neill further muddied the waters with a back-scenes anecdote he shares here. Really now, can a man who stops to talk fancycams really be all that bad? 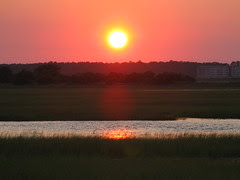 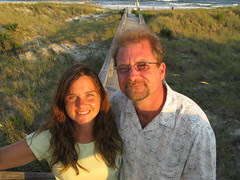 By far the quietest of Brunswick County's three barrier islands, Sunset Beach is delightfully sequestered. To even get on the place, vacationers have to drive over a single lane pontoon bridge, one of - if not the - last of its kind still standing. That rickety treasure will soon be replaced by a concrete abomination, but for now travelers still thrill to its every staggered crossing and curse it when they have to pee. Once on the island however, suburban fanilies quickly find a lack of fast food places, a dearth of urban sprawl and an overwhelming absence of hassle. You might say there's nothing to do. 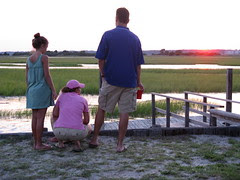 Which is exactly why families from up and down the East Coast seek it out. Unlike nearby Myrtle Beach - that wretched hive of tattoo parlors, trinket emporiums and cheesy theaters, it's a challenge to catch the clap at Sunset Beach. Sure, someone has - but most seven day inhabitants revert to more wholesome diversions. Sun worship, civilized sibling interaction, seashell procurement: these are the activities on Sunset's agenda. Why else would I drive four hours away from home just to play house? It ain't because of the flat as hell mattress I been riding all week. It's the scenery, the serenity, the seclusion that makes me forget how to even spell T-V.

Don't worry though; I'll be awash in flopsweat and apoplexy by late Tuesday. Wednesday, tops.
Posted by Lenslinger at 10:04 PM 6 comments:

Even with suncreen on my toenails, I keep a constant vigil for Schmuck Alerts. This almost qualifies. But then again, these two saucy dance partners were just doing their jobs - whatever those are. It happened in Dee-troit City as Mayor Kwame M. Kilpatrick wrapped up a midday press conference. That's when WXYZ's Steve Wilson - fresh from his van down by the river - moved in to quiz the Mayor on his latest controversy. But before Wilson could begin his grilling, he wasnrebuffed by an unnamed member of Kilpatrick's security detail. What followed was an awkward two-step, an aimless waltz featuring the kind of heated man-on-man action rarely seen in the Motor City. Hey, I'm all for free love, but the Mayor, his goons and the eternally rumpled Wilson share more bad blood than a hypodermic needle at a smack shooting gallery. I say we finish once and for all with a Kimbo Slice cage match, the Mayor in his thousand dollar suits, the reporter in a greasy wife-beater and and cycling shorts. That or a Dance-Off. Either way, I'd pony up some cash to catch the whole thing on Pay-Per-View. Who's in?
Posted by Lenslinger at 8:17 AM 7 comments:

Basking in the Lack 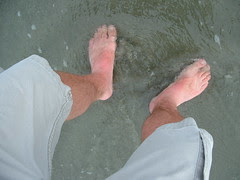 It's Monday morning and your resident lenslinger is totally content. That can only mean one thing: I'm at the beach! Not just any shorline either, but that bastion of placidity known as Sunset Beach. I've barely been on scene 48 hours, but already I've swallowed enough seawater to drive a castaway mad, stumbled through numerous trinket emporiums, gorged on the finest in Southen-fried seafood, plowed through most of Codename Greenkil, cursed my ancestors for making me so pale, decided what to name our future beach cottage (Gritty Britches!), admired the expansive bourbon selection at the island's ABC store and brought shame to my offspring with the kind of ludicrous headwear only indulged in far from home. Yes it's been a tranquil couple of days and if family history is any indication, I'll barely have a pulse by the time we're ready to leave. That's quite the accomplishment for a someone as angst-ridden as I, but it's why we journey to this quiet coastal enclave every twelve months. This year, however, there's a difference...

I got the internets. Wi-Fi, that is. Wedged between that pile of sandy flip-flops and an empty bottle of the wife's Sangria lies a steaming hot laptop - a cyber-connection to the mainland that soothes the intellectual sunburn of your wordy camera nerd - not to mention his fourteen year old instant messenger. Of course my wise bride has imposed a moratorium of sorts on the damn thing, but there's nothing preventing me from rising early for a little pre-java dispatch, right? SSSHHHHH! I think she's awake. Act casual, I'll play it off like I'm checking stock prices or something... Anyway, I gotta go. Just know that as I drag all sorts of suburban debris from the house to the shore to the house to the shore, I'm thinking of you, bored reader. (If that ain't creepy enough, I often do so shirtless.) Once I fish my digital camera from beneath that pile of soggy two-pieces, I'll pop off a few shots of this blissful spit of land and send them your way. For now though, check out this true-life account of Sunset inrigue I penned many moons back - a treasured tale with a clunky title. While you do, I'll be right here, spraying sand off the boogie boards and basking in the lack of deadlines. Can you blame me?
Posted by Lenslinger at 5:43 AM 5 comments: