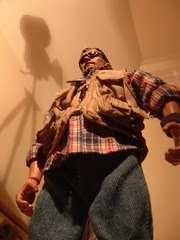 I love my job. No, you haven’t mistakenly clicked on the wrong blog . It’s just that every once in awhile I have to remind myself of something fundamental: I still very much dig what I do. The access, the creativity on-demand, the daily race to meet never-ending deadlines…it all goes quite well with my interloper tendencies, my artistic bent and my raging (but undiagnosed) attention deficit disorder. What other gig calls for equal parts writing and lighting skills on a daily basis? In what other profession could I saunter into a crowed ballroom or a freshly busted crackhouse wearing the exact same outfit and expression? Where else could I people-watch, stunt-drive and hold a million people’s collective attention on my oh-so weary shoulder? Nowhere but Tee-Vee-Nooze, baby.

That’s what drew me to the exciting field of broadcasting so many moons ago. That, and a staggering lack of viable career options. But chances are I’d have turned down a seat on the space shuttle - had NASA come a callin’ back in 1989. For that was the season of my content, a fleeting Honeymoon period when I was happy just to hold a TV camera, let alone ride around with one wedged (all O.J. like) in the back of a white Ford Bronco everyday. But unlike a certain low speed pursuit that was still years away, I slammed the gas-pedal through the floor as I screeched from sit-in to bake-sale to stand-off. It was the early 90’s in small-market North Carolina, but to my delusional inner knight in logo’d armor, it was freakin’ Camelot.

But a not so funny thing happened while storming the castle. My field of vision changed considerably. No longer the eager serf I had once been, callous cynicism replaced youthful vigor, my bright eyes and bushy tale growing slowly into an aching back and thousand yard video-junkie stare. Blame it on a lack of moderation. See, back in my twenties, I hit the news pipe pretty hard, taking deep hits off smoldering wreckage, live truck pollution and intern perfume. Is it any wonder I suffered from the crush of a thousand broadcasts? Can one repeatedly bend space and time in the name of news without throwing their precious point of view out of whack? I damn sure couldn’t.

Today, however, I consider myself a burnout reformed. No longer titillated by every chase and stake-out, I’ve pounded my chest and choked on my bile a time or two. You would too - if you had to endure the relentless pace of the modern calamity cycle, the competing strains of the victor and the vanquished, the flagrant ire of pubescent housecats too girly and weak to ever step outside the newsroom. For this I gave up a semi-lucrative career in auto sales? Yup. Too bad I threw away all those business cards. I could be moving units even as we speak - instead of rushing in and spraying light on dying headlines. Intriguing, sure - but you can’t exactly take zeitgeist for a test-drive, now can you?

I’m not alone. Most career shooters I know suffer the very same disillusions. They just don’t bitch about ‘em on-lien like I do. Instead they huddle in their camera scrums and roll their eyes at anyone without calluses on their hands and soul. But just when the lot of us are awash in disgust, something happens to quell our well-earned wrath. A captured surprise on optical disc, a backstage pass to disaster’s after-party, a happy accident in the edit suite. No, it doesn’t take much for all the politics and tripe involved in the news-making process to melt off the edges, leaving nothing but undeniable truth beaming center-screen. It’s almost enough to make one forget about the office dillweed who’s yet to figure out he’s a walking cartoon.

To Blog or Not 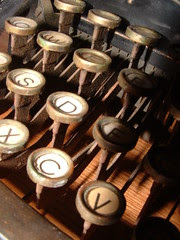 Relax - I'm not going anywhere. I'm way too hooked on being read to shutter this website anytime soon. But as someone who's been web-publishing at least five nights a week since the fall of 2004, I can tell you - the compulsion to do so fluctuates. Most days my forehead is afire with analysis and lies, twisted sequiturs scribbled on windshield and page. Other times I can barely recall how to write my name, let alone some diatribe of note to leave overnight on-line. Lately, I've been of the latter mind - an interminable phase fraught with restlessness and worry. Well, not too much worry. I've been through this before ; the moment I convince myself I'll never again line words up successfully, some pre-written screed will pop in my head and I'm off to the races. Oh, to wrest control of that elusive mojo...

But that would be too much to ask, I guess. Instead, I'll try to be grateful I learned to write at all, for there was a lifetime on the books before my particular muse ever figured out how to strike. Now that it does (or did) on a regular basis, I'm reduced to the role as distracted dictator. That's fine with me - as I love to listen to the guy in my head. See, most times he's smarter than me, he's got better hair and he's not afraid to type what I really think. (Though to be fair I often have to censor his prose as to insure my weekly stipend.) No bother. The dark comedy currently afoot will make for perfect fodder one day - provided my readers don't think I'm yankin' their chains. For now, you'll just have to settle for this, the latest in an irregular series of directionless ponderings, the kind that are usually followed by a flurry of more meritous posts. Otherwise, check my archives for times when I really had something to say and know that though I'm not pummelling you with my every thought, you, dear reader, are very much on my mind...

While I'm suffering something of a malaise, a fellow photog is scaling new heights in gastrointestinal adventure. Chaz Smith has spent twenty years chasing news in Eastern Pennsylvania. In that time, he's wolfed down alot of grub on-the-go, which in his neck of the woods, means cheesesteaks. No surprise there - you'll find few folk as intimate with a region's backroads, greasy spoons and folklore as the longtime photog. What is kinda shocking is that his station, WFMZ, recognizes Chaz's uniquely local culinary acumen. In fact, they're putting him on special assignment: scour a list of 21 viewer-selected steak shops in a hard-target search for the best damn cheesesteak in the Lehigh Valley. I ask you, is there any higher purpose for all that portable broadcast equipment? Quite simply, no. That's why I'll be monitoring Chaz's artery-clogging odyssey from afar and paying my respects to a station that's not afraid to spotlight someone on the payroll other than the usual, over-glossed suspects...
Posted by Lenslinger at 9:57 PM No comments: 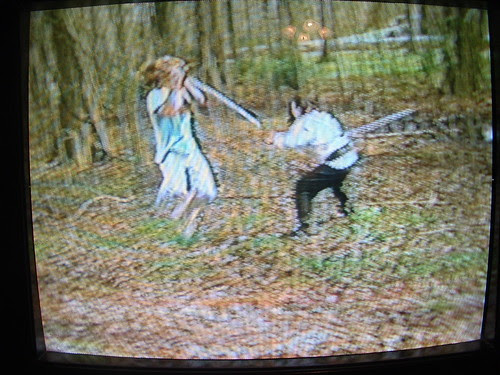 Okay, this one's gonna be tough to explain. Perhaps I shouldn't even try. What I will say is this: Some people master their craft through deep research and rigorous study. I figured mine out by storyboarding hippie sword-fights in the park. Is that so wrong? I don't think so - especially when you're a young camera-head with lots of questions about placement, pans and pacing. What better way to explore the cinematic possibilities than an afternoon with my buddy Sam the Barbarian and his collection of yard-sale swords? Huh? Sure, we freaked out a few ECU soccer moms at first and it was a shame about those old people - but between the numerous "Dudes...", countless Monty Python references, and clumsy white man high-fives, we all learned alot that day. I did, anyway - for the resulting footage made for pivotal editing for years to come. After shuffling the shots through every edit bay I could find for awhile, I finally stopped trying to replicate that wrinkled comic book inside my head. All that remains is a forty-five second segment deemed by the Lenslinger Committee as Way Too Stupid for YouTube. All I can offer you presently is this frozen antique frame, in which I've apparently taken flight in mid-mullet lunge, as the Evil Sam struggles to smite my wrath all medieval-like. Good Times.
Posted by Lenslinger at 10:22 AM 2 comments:

Budd Dwyer and I

I don't really know much about Bud Dwyer or why on my twentieth birthday, he decided to off himself on live television. But pull the trigger he did, jettisoning his legacy into the darker expanses of pop-culture's stratosphere and eclipsing any chance of his being remembered for something other than how he chose to check out. I wonder if that was his intention. Hope so, because shortly after his grisly exit aired on live television, the whole episode languished in our collective imagination before glimpses of it cropped up in song, satire and print. These days of course, the video is again available for wide consumption, thanks to the unflinching twin-tubes of the internet. That's only natural I guess, but I wonder how many out there chose (like me) not to watch it? Hell, I've never seen it. I don't have to in order to understand what the beleagured politician did that day. As best I can anyway. I just feel for the photogs and reporters unlucky enough to be present during that particular press conference. I got mental scars from briefings like this that have merely gone on too long. The poor newsfolk in that room got the kind of highlight clip that isn't easily erased. Nice shot? If you say so...
Posted by Lenslinger at 9:06 PM 1 comment: