A Photog Goes to Market 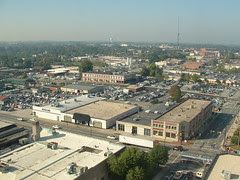 Twice a year an alleged 80 thousand furniture industry insiders invade my adopted community, turning an otherwise sleepy Southern town into a bustling metropolis. Yes, if you back up far enough and squint your eyes, High Point looks like a real city - at least for a few days in April and October. But the International Home Furnishings Market is in peril, threatened by a newer, glitzier cousin who goes by the nickname 'Sin City'. According to some, Las Vegas is about to steal High Point's crown jewel, leaving the the strangely complacent town shuttered and broken. Others shrug off the idea as uninformed hype, and point to the the meee-llions of square feet furniture showroom that so dominate downtown. As for my opinion...I dunno - I'm just a photog. 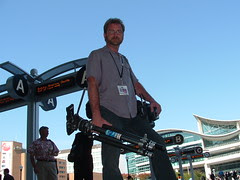 For me, Furniture Market is primarily a calisthenic event. With open parking spaces harder to find than an unadorned store window, I'm forced to hoof it from end of downtown to the next - schlepping camera, tripod, gearbag and grumbles all along the way. Normally this kind of awkward exercise unleashes my incredible whining powers, but with a (slight) chill in the air and thousands upon thousands of kooky characters to groove on, I almost look forward to this twice-a-year trek into home furnishings hell. Almost. Okay, so I dig watching the frantic furnituratti transform High Pockets into Manhattan. Just don't tell my bosses, as it will surely work against the camera-slinging curmudgeon schtick I've been cultivating all these years. 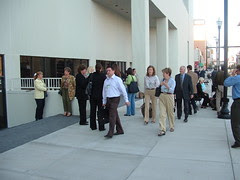 Blame it on my upbringing. Growing up in rural Wayne County, North Carolina, I spent many a teenage moon ripping up the backroads of sleepy Saulston, dreaming of a lifestyle that didn't revolve around tobacco barns, softball games and church socials. I have managed to tour a dozen big cities since those early days (usually with a shiny TV camera or overstuffed seabag on my shoulder), but life has a funny way of placing you where you need to be through matrimony, offspring and mortgage rates. Thus, I find myself in the teeming Piedmont region of my beloved North Carolina, focusing far more on my thwarted literary efforts than on snapping safari pics from a thousand urban jungles. Still, it's nice when the Big City comes to town for a few days... 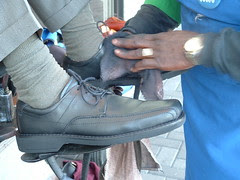 Which is exactly what little old High Point feels like these days. Surf the streets and you'll find greasy Europeans smoking impossibly thin cigarettes, over-perfumed exotic women worthy of their own magazine cover, sleazy back-slapping retail weasels who'll guffaw at the cheesiest of jokes for just the right commission and high-powered furniture executives with personas and entourages and personas that rival any James Bond villian. Oh, the diversity! Just yesterday I was trapped on an escalator, listening to conversations in French, Mandarin and Brooklyn-ese, while trying desperatley NOT to spark an international incident with an ill-placed tripod leg up somebody's out-of-town wazoo. Heady times for a guy who grew up taking pictures of light poles for fun. 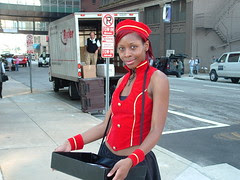 Then there's the people who are paid to look funny. Every year some furniture company's marketing guru comes up with a new way to attract street-level attention to their showrooms or new lines of velcro seat covers. Old-timey Christmas carolers, musketeers, fake presidents, hispanic Elvises and cocktail-hour hotties have all vied for my lens' attention as they peddled their logos on the sidewalks of Furniture City. My eight year old still equates 'Market' with the fly fisherman she used to see clopping around town in hipwaders and give-aways. I just hope she's not scarred for life. Of this year's costumed diplomats, most escaped the lens of my digital camera, but I did manage to pop off a shot of this delightful young lady in bellhop garb. I meant to ask her what she was promoting but she sashayed off with such cosmopolitan verve that I was rendered speechless by the very sight.

Granted, these are not the kind of things the Chamber of Commerce brags about in their glossy brochures, but it certainly be what I'd miss if the Furniture Market does indeed high-tail it out West. Now, where's that heating pad? My back is kee-ling me...
Posted by Lenslinger at 8:14 AM 1 comment:

While I entertain houseguests, check out the following photo-illustration from the REAL king of photog-bloggers, Little Lost Robot. This time out, LLR exposes the perils of warm prop displacement, also known as "Where the %!$@# did my background go?" 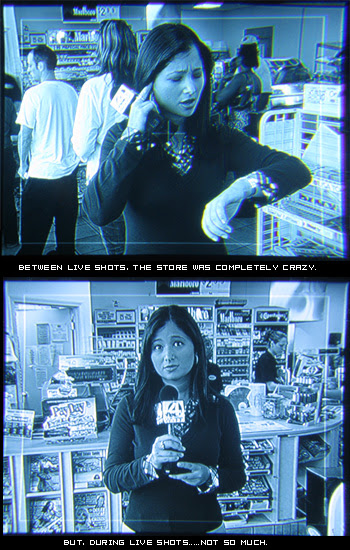 Now go read the whole thing, and while you're there, check out the nifty photog fashion spread. Tomorrow, a dispatch from yours truly on the joys and sorrow of covering Furniture Market. Consider yourself warned...
Posted by Lenslinger at 9:11 PM 2 comments:

When I didn't immediately comment on the recent Today Show live-shot gaffe, I figured I'd missed my chance - but Michelle Kozinski's ankle-deep canoe ride is still sending ripples through Cyberspace, thanks to a snarky populace and of course, Al Gore. If you didn't see the clip, it's okay - this frame-grab says it all: a husky-voiced, expertly-coiffed reporterette joins us live from the driver's seat of a canoe, delivering her breathy report while idly paddling through flood-ravaged New Jersey. All is going well for a few seconds, until two schmoes in hipwaders walk through the shot, totally blowing the illusion of a correspondent at sea. After the shot, Matt and Katie lambasted Kozinski on-air, making a dumb situation worse by chortling smugly from their overstuffed anchor chairs. Stay Classy, Phoenix!

At the local level, we're offer a far less sophisticated broadcast product than the cutting-bending production values emanating from Rockefeller Plaza. Aside from a little feathery backlight on interview subjects and reporter's shoulders, I try and stay invisible. I fail as a documentarian when you start noticing lighting, pacing and camera placement. Besides, if I wanted to play with C-Stands and duct tape all day, I'd have wormed my way into the local filmmaker's scene, instead of spendig my twenties chain-smoking outside small-market newsrooms. Oh well ,one man's photog vest is another dude's black turtleneck weater. But I digress, what I'm trying to say is this: Morning shows have always surfed the murky waters between news and infotainment. Whenever they paddle into the further reaches of either cove, they risk scraping their knuckles on the jagged reefs of their eroded credibility.

Now if you'll excuse me, I have a two-camera live shot to prepare for. See, the hot air balloons lift at dawn...we'll put a reporter in one basket and have you, your camera and a two-gig transmitter in another one. Now, you can't exactly control a hot-air balloon's flighpath, so what we thought we'd have you do is...
Posted by Lenslinger at 5:37 PM 7 comments:

Apparently it’s no longer safe to drive a marked news unit down the mean streets of…Toledo? You heard me. As anyone with cable news can tell you, a planned march by neo-Nazis sent a crowd of locals into outright apoplexy, sparking a lightning round of vandalism, arson, and the pre-requisite looting. Somewhere amid all the lawlessness, the Fourth Estate took a few hits. From b-roll contributor Seagate News, this abbreviated report:

“We (WUPW) lost a back window on one of our Jeeps and a photog got tear-gassed. We are very lucky that we have unmarked units, as from what I've heard the other stations' trucks were completely smashed.”

Now, certainly there are far graver consequences from the anarchy in Ohio than a couple of smashed-up news cruisers. But if there’s one thing the corner office and the cameraman can agree on, it’s that there’s absolutely nothing funny about dented logos. At the photog’s online watering hole, shooters are chewing anew on an old debate: marked cars versus unmarked. Many a TV news lenser professes great detest for the bright graphics our bosses insist on draping across our chariots. Instead, we behind the lens prefer a quieter mode of transport, a little stealth if you please. Personally, the half dozen or so news cars I’ve driven to a finish have all been gaily festooned with numbers, call letters and promises. Though it can be a pain at times, I’ve found a logo on the door gets me out of more jams than it gets me into. If anything, it’ll sure make you stop picking your nose at stoplights. Curious viewers looking for famous faces don’t need to see THAT….don’t ask.

Where was I? Oh yeah - rocks, racists and rioters…bad combo. I remember my first couple of Klan Rallies (who doesn’t?). I was still in my early twenties when the video-camera I’d starting carrying on my shoulder dragged me through a long, hot summer of KKK events. I attended several, there in part because I was fascinated by such acutely bent thinking but mostly because I worked weekends back then and the local inbreds-in-bed sheets favored marching on Saturdays. Most that I went too were relatively quiet affairs, just ten to fifteen hillbillies waving flags and looking silly as they sauntered and strutted down the deserted streets of some Downeast downtown. Most of the spectators wore blue helmets with face-shields, the rest hid behind oversized fancy-cams.

Once, I spotted a throng of unhappy onlookers - denizens of a nearby public housing complex who’d turned out in force to shout down the sheet heads, only to be cordoned off by cops into an out of the way corner. When I approached with my camera, catcalls, gang-signs and challenges answered my requests for interviews. When the tallest of the group issued yours truly a verbal street thrashing, I rocked back and forth on my heels, listening absently-minded to the crinkle of videotape roll across the heads in the strange new machine beside my head. My awkward silence surprised my would-be intimidator and he emitted several deep chuckles to prove it. Minutes later, I pinned a lapel microphone to his throwback hoodie and we had an interesting on-camera discussion about the role of race in the New South. Not surprisingly, the resulting soundbites towered over the feeble intellect on display by the toothless brigade on center-stage.

But again I’ve wandered. I started down this path to say a thing or two about news crew safety but I keep getting tangled up in the underbrush of aimless anecdotes. While I fumble about for my metaphorical machete, consider this: A TV camera will get you into ANY situation: dangerous, titillating or mind-numbingly dull. However it won’t protect you once you’re there. What it WILL do is escalate matters beyond control with barely a glimmer of its non-blinking lens. So be prepared. Situational awareness isn’t enough, for the boxy news camera next to your brain makes a tempting target in times of strife. Call it the dark side of the all-access pass. Better yet, call me a cab - I ain’t drivin’ straight through the Valley of Death in a Ford Escort wrapped in rainbow peacocks.
Posted by Lenslinger at 2:01 PM 1 comment: