Reflections of a Specter

If you've ever stalked a plate glass window, you might be a photog. Relax, I'm not gonna go all Foxworthy on you - but the above self portrait by Gulf Coast photog Chris Sasser sure makes me want to. Why? Because, there isn't a news shooter alive who hasn't framed up his reflection and hit RECORD for the heck of it. Oh, it ain't vanity -- it's boredom. Hey, YOU loiter in a box store parking lot pretending you're invisible, see if you don't use every prison yard trick in the book. I've been known to count the paces between fire hydrants, scan the perimeter for Rent-A-Cops and keep an eye out for chatty pedestrians.

"You, Ma'am - in the Smurf Island t-shirt - care to tell me your opinion on the moratorium the city's not building? No? Okay, how about your son there. Surely any young man brave enough to bare that much underwear in public possesses a cogent understanding of local events ... if not a belt. What's that? You're calling security? You're aware this is a Wal-Mart, right? You know I slipped the head Greeter a couple of TV station bumper stickers to look the other way? Yeah, it's Standing Operating Procedure for those of us in the Corps - I mean those audio/visual geeks who never grew into a real job. See, it's right here in the Photog Handbook, page three, right between 'How to Dress Slovenly' and 'Why You're Allowed to Drive Like A Cop.' Here, I'll read it out loud...

'When gathering man on the street interviews in possibly hostile parking lots, try to curry favor with the rental authority or volunteer retiree brigade through through the use of station freebies. Coasters, pencils, those logo'd propeller beanies that never really took off... Should they protest, it's often helpful to browbeat them with the name of your consumer reporter - or promise them the requisite goofy weatherman will gladly come to their child's classroom for a game of 'slap and tickle...'

How's that? You hate my station? You can't understand why the traffic chick outlines her lips in eyeliner? (Yeah, me neither.) Hmmm? Your husband is polishing his Conceal/Carry permit back in the El Camino? What's that?He won't let the fact that he's on full disability stop him from pistol-whipping a one person news crew???"

...I'll be over there recording my reflection if you need me.

Calf and a Half 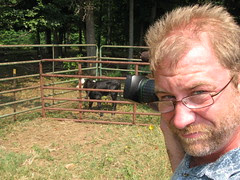 In the justly underrated Young Guns sequel, a late-80's iteration of Billy the Kid (Emilio Estevez. Really?) informs a new victim of his impending immortality. "Yoo-hoo, I'll make you famous," he hisses before cocking his prop... It's an iconic line from a forgettable film and it's stuck with me through years of staring down debutantes and dirt-bags in the name of news. Today it burbled from my lips again as I peered into the abyss of a young calf's cornea. Of course the beast regarded me with udder indifference (sorry!), but the two fat green flies floating over his eyelid did dip and wink at me in some sort of cross-species solidarity. Then again, I could have been hallucinating. It was close to a hundred degrees and my day had turned weird an hour or so earlier, when I slept-walked into the morning editorial meeting only to see three cryptic words etched in dry-erase marker by my name: 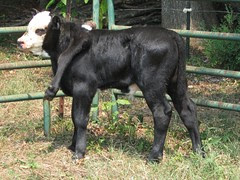 Hoo-Boy. Either I was about to point my lens at an after-market bovine or profile a local Emo band with the worst name since Panic! at the Disco. Either way, it was gonna be a hot ticket for nothing tweaks the show-stackers like imperiled animals or troubadours in guy-liner. Me, I'm for anything that'll get me to the end of a digital timeline, be it a little elbow fiesta in a courthouse hallway or a triple-lit sit-down with Bigfoot's sister. Yes, when it comes to assignments, I got no rock-bottom. The producer staff seems to test this theory at every juncture, which is how I came to recite bad movie lines to a three week old calf with two extra legs hanging off his haunches. At no time during my spiel did a young Jon Bon Jovi wander out dressed like some Anglo-American Indian and warbling about drawing first blood, but... truthbetold, had the chick metal heartthrob sprung forth from a rhododendron bush singing 'YMCA', it would have made the day stranger by only a couple of degrees...

But enough of MY drivel. It's YOUR turn to be severely weirded out: