Try as I might, I cannot get through an episode of Whale Wars. It's not the heartless slaughter of those magnificent beasts that drives me away; it's those damn hippies! Seriously, if I was bobbing along Antarctica with that crew, I'd ram every harpoon ship I saw just to shake the smell of Patchouli oil from my decks. Yes, there would be only ONE thing worse than watching a whole season of this Animal Planet production: shooting it. Don't believe me? Take a few minutes and watch The Making of Whale Wars: a growing collection of interviews with the shooters and producers who trolled the Southern Ocean with the ballsiest crew of nut-bags ever to play chicken with a Japanese whaler. It's a soggy dichotomy: The activists aboard the Sea Shepherd and her sister ships are willing to DIE for those poor whales. The camera crews shadowing their every suicidal move are NOT. Good luck with that. You know even if the photogs of Whale Wars were positive they'd see dry land again (they were not), the whole trip was an exercise in misery. Gloves, Neoprene suits, helmets: these are not things that make operating a camera easy. Now, crawl down into a bucking Zodiac and HOLD ON as the shaggy pilot of that small boat makes a beeline for a ship full of pissed off whalers with water cannons. "Great Neptune's Nipples, can't I shoot a thousand city council meetings instead?" Probably, but it won't score me the kind of street cred the Animal Planet crew came back sporting. In fact, I believe the producers have stumbled across a viable reality show spin-off: the adventures of a reluctant camera crew as the salty oddballs they're about to make famous do their best to kill everybody aboard. 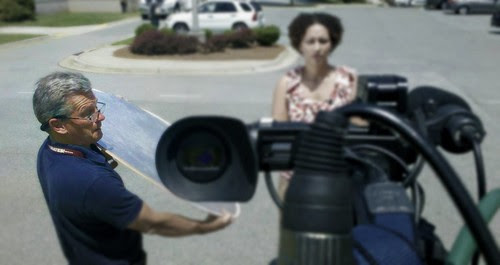 Like a Navy SEAL dropped into an enemy compound, the veteran photog doesn't stop until the target is acquired. Okay, so according to the latest intelligence, running around shooting news is nothing like offing lofty despots. Still, we do get to take down the occasional slumlord -- and that's after we rake him over the coals in an overly-promoted special report featuring flashy graphics and ominous drones. But I digress. What I really logged in to talk about is the heavily-seasoned 'slinger: that guy (or gal) in your shop who was dragging glass around this town when you were still mastering your multiplication tables. They're not exactly the Greatest Generation, but they are a cut above your modern day news combatant, and I say that not just because I myself wear the stripes of a lifer. Okay, that IS partly why, but you'll understand if I boost my own kind, won't you?

Just look at the specimen above. The graying hair, the taut muscles, the fierce of look of concentration... "Did I turn the camera on?" he's probably asking himself. I dunno, Chief, you're the one who grabbed the reflector and tried to burn the talent's retinas out. Figured it was some kind of old school finishing move. Hmm? You need to me to work the overnight shift the rest of the week? Lemme pile on some accolades. The grizzled news shooter is part Poet. Plumber. Pirate. They are hoarders of moments, harbingers of horrors and dispensers of whimsy. With a dedication to frame rivaled only by their knowledge of local eateries, they are a fierce opponent and a staunch ally. And they're fun! Older photogs don't take anything too seriously - except their next deadline. Get in the way of that and they'll fillet you with a rusty Leatherman. If they can find it.

So, no - being a stateside news shooter is nothing like being a member of the special forces, though both require the deft touch of an operator. Whereas SEALS rappel into hostile territory and spray lead everywhere, we park our boxy transports on the edge of peril and bitch until the voices in our head(phone)s tell us it's time to go home. Ain't America grand?
Posted by Lenslinger at 6:02 AM 1 comment: 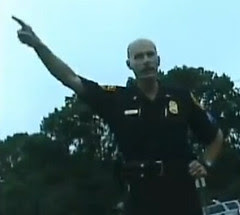 Calling All Cars! Calling All Cars! Proceed to Sycamore Avenue. Sergeant Pornstache has skipped his meds again and is now accosting a photog. Witnesses say he pushed the cameraman back a block, ranted about his thirty year career and threatened to go viral. The camera's red light glowing. Repeat, the red light is glowing! Apprehend immediately! The repeated use of tasers HAS been authorized...

Sadly, that dispatch came too late. Before reason could be restored to Suffolk County, a member of the local media got locked up and a veteran cop proved himself a complete tool. It started where it ended: Long Island. A photog named Phillip from Stringernews.com responded to a police chase turned car crash and quickly fell out of favor with the force. It's unclear if any officers were injured in the wreck, but judging from the pulse of one Sergeant, Robocop himself was pinned under a couple of Hummers and the TV truck had just backed over the jaws of life. "GO AWAY!" yells Sarge - the first of thirteen times. Phillip does so, slowly - all the while being told his just being there threatened a perfectly good investigation. It's hard not to notice kids ambling by the crash scene as the credentialed photog is forced back a block. Near the end of the inevitable Youtube clip, we see the angry officer swooping in by squad car, whereupon arrests Phiilip the photog for obstructing an investigation some distance away... Can't we all just get along? Apparently not. Ya know, it only makes so much sense to argue with a guy who's packin' heat, but I would like to ask Sergeant Neckvein there just what America looks like on his watch. From where I stand on a public street, it doesn't seem to matter whether I'm holding a fancycam or a dandelion as long as I stay out of the way. As a guy who finds himself at just such occasions, I dread the day I come across a deputy so bedeviled by my presence. SCHMUCK!