Behind Every Great Reporter... 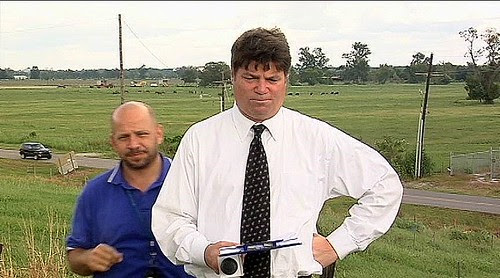 ...is an equally great photog. Okay, so that's not true. I know reporters who could make Sasquatch cry on cue no matter WHO'S standing behind the camera - just like I know shooters who can concoct whole operas without the aid of any on-air talent. But overall, TV News is a collaborative effort. Hell, even a needy loner like me has to employ the assistance of former reporters to voice his precious anchor-packs. Yes, the act of broadcasting can be best described as a team sport. So why do I so love to go it alone? Well, you could say I don't play well with others, or that I'm a tad anti-social, or that I have something of a chip (or 3) on my shoulder. You could say ALL that! Just don't say I don't like reporters. I LOVE 'EM!

I love reporters who bring in the Emmy they won nine years ago and plant it firmly on their desk for all to admire. Where ELSE am I gonna stick my old chewing gum?

I love reporters who can double as game show hosts. That type of personality comes in damn handy when you're trapped in a Wal-Mart parking lot interviewing random strangers about abortion, moratoriums, or The Lord.

I love reporters who take 45 minutes to tease their bangs yet can log an entire morning's worth of footage I shot in the time it takes Ellen to stop dancing. It's a favor I usually returnin the edit bay.

I love reporters who can accompany me up a widow's porch, get the pictures, soundbites and details our bosses so desire and NOT make me want to take a Lifetime Shower afterwards. They're rare, but they're out there.

I love reporters who constantly remind everyone around them of their personal tragedies, semi-famous spouses or priviliged upbringings. THEY are a satirist's dream.

I love reporters who aren't quite yet ready to admit they're gay - even though it's the ONLY thing their colleagues talk about. Coming Out can't be easy no matter where you work - but TV newsrooms are filled with angry, self-loathing reprobates who live to denigrate anyone more stylish than them.

I love reporters who think I'm some dumb-ass photog. God, how I love them!

I love reporters who used to be debutantes, 'cause they make me stonger. See, I've carried more prom queens over the finish line than most parade floats - and I got the callouses to prove it.

I love reporters who can discern innuendo, cohesion and nuance from rambling county commissioner soliloquies, l-o-o-o-n-g after my dumb-ass photog eyes have glazed over.

I love reporters who come to the morning editorial meeting with a dozen story ideas, because chances are I'LL get to turn the really visual, fluffy ones the suits don't want to burn a full crew on. (Thanks, Whitey!)

I love reporters who carry around their make-up and haircare in those six-tiered, oversized tackle boxes. I've produced weekend telethons with less gear.

And finally, I love reporters who can take vague, protracted, esoteric issues and make them electronically palatable for the masses. It's something I cannot do and it serves as a constant reminder that the broadcast world cannot live on smart-ass cameramen alone.

(Speaking of smart-ass cameramen, the one pictured above is one of my all-time favorites: Rick 'Turdpolisher' Portier. The reporter he's standing behind I don't know, but if Turd's backing him up, he's okay by me. Now go check out Rick's latest post on Truisms of Photogerry. And give him my love, would ya?)
Posted by Lenslinger at 10:35 PM 3 comments: 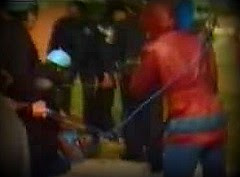 November 3rd, 1979. It's a date the leaders of my adopted home city would rather you not remember. But it's a date that will be inexorably linked to Greensboro, N.C. - for that's when the Ku Klux Klan shot and killed protestors from the Communist Workers Party, all while local TV cameras rolled. When the smoke cleared, five accomplished idealists lay dying in the grass as the Klansman crawled back in their convoy of beat-up sedans and sped away. Since then, smarter minds than mine have examined every facet of the shoot-out at Morningside Homes. Books have been written, documentaries shot, hearings held. Here in the Piedmont, the end result of that murderous day - sometimes called The Greensboro Massacre - has long remained a blight on a city that likes to think of itself as progressive. If the police department's lack of action that day wasn't enough to convince some the attack was ordained, the eventual acquittal of six Klansmen by an all-white jury made many think it was, at the very least, tolerated.

But that's not what fascinates me about the unthinkable events of November 3rd, 1979. It's the fact that so much of it ended up on the evening news. Four cameras were shouldered and rolling when the KKK began scuffling with protestors. By the time the guns came out, the photogs present were no doubt operating on disbelief and adrenaline. The images they captured are still hard to watch; murder, death and anguish usually are. In a sense, that smeary footage has never stopped rolling in the collective memories of many people who still call this city home. But what of the news shooters? What about the veteran lensmen who watched a mundane assignment morph into madness through the shaky frame of their handheld cameras? What does that do to a person who has decades left of squinting through a tube? I ask because I do not know. A few of the journalists there that day have gone on the record with their impressions, but a shooter or two have remained comfortably mum. That's their every right, I guess, but I'd sure like to pick the brain of any TV photog present that day, in hopes of understanding what a day like that does to the soul.

So, there you have it, gentlemen. I've always been too polite to broach the subject in person. Consider this an open invitation, should you ever want to relive a shift you most certainly haven't forgotten...
Posted by Lenslinger at 10:45 PM 5 comments: