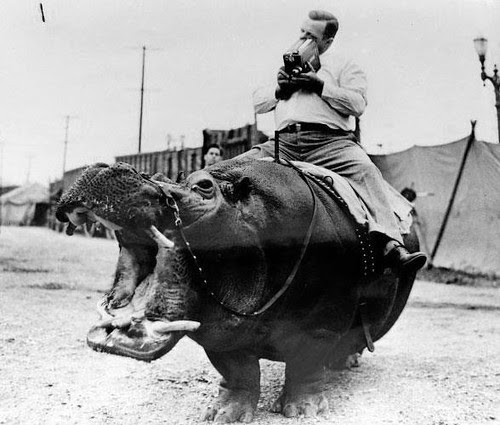 We've all been there: stuck upon a heffalump, squinting through an electric toaster, wondering where it all went wrong. Okay, maybe I'm projecting a bit. For all I know, Universal Newsreel legend Mervyn Freeman willingly wedged himself atop that hefty herbivore -- though for the life of me, I can't figure out WHY. Then again...

... I once camped out in the back of a police van overnight in hopes a smash-and-grab artist would have the courtesy to hit the convenience store in the middle of my camera's cross-hairs. He never did, but I made some new cop buddies and even got invited to an autopsy. (Note to Self: Finger sandwiches not right for every event.

... Once I got soclose to an orphaned lion, the damn thing cocked his leg and pissed in my lens and on my face. To make matters worse, the hippie zookeeper lady had just told me it was about to happen! There's a lesson in there, I guess, but I'm not sure what it is. All I do know is I can't so much as watch The Lion King without a bottle of Windex by my side.

... Not only have I waded into the chaos of a fresh crime scene, high-fived my way deep into a Republican fundraiser and openly associated with known news anchors, but I've even manned up and walked a camera into the middle of a coliseum full of American Idol hopefuls. May not sound like much, but have YOU seen how high a cross-dressing Streisand fan can kick?

... If I had a dime for every time I've stuck my glass in the face of some shackled ass-hat, well, I wouldn't be seen scrounging in the floorboard of my news unit for soda money. I only wish all that backpedaling had made lined my pockets with silver, instead of just making me paranoid about gutter curbs and newspaper shooters.

... Long ago, I allowed myself to be locked in the back of a live truck in mid-edit while a reporter drove the damn thing down a mountain. I won't let it happen again. For one, staring at a screen three inches from your face while hurtling backwards at sixty miles per hour is no way to go through life. Secondly, vomit's really hard to wash out of station fleece wear.

Kinda makes a hippo ride not seem so silly.
Posted by Lenslinger at 10:37 PM 2 comments: 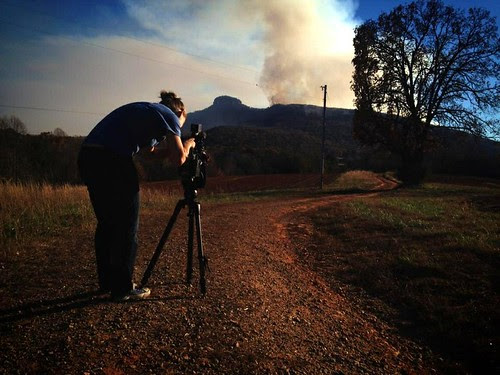 A monadnock I'm fond of is about to burn and I have yet to get there. This bothers me a bit, as I still feel the need to be On Scene, no matter how I try to hide it. Most photogs do. Unplanned calamities are, after all, our profession's breadfruit. Without them, our little slugs and rundowns would slow to a crawl, no matter how many tap-dancing poodles or weather center wedding proposals we come up with. I, myself, cringe at the sound of scanner traffic. It's that kind of static that interrupts my meals. (I can still taste the steak I never finished the night some guy shot his wife twenty years ago.) I've probably woken up on the phone in the middle of the night more times than I've called my Mother. These days, I'd rather bob for close-ups in the Zumba pool than circle the drain of a drive-by shooting. Still, when a beloved landmark falls victim to stupidity and dizzying visuals begin to spew forth, even this Z-block operative finds himself eyeing the horizon...

For a moment, anyway.
Posted by Lenslinger at 9:03 AM 3 comments: