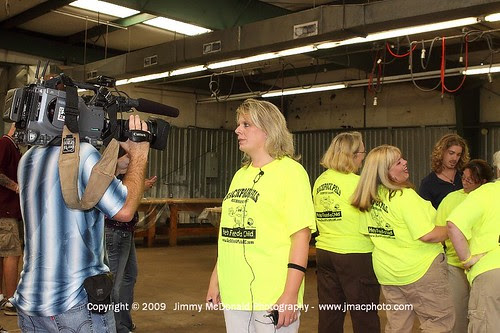 Say what you will about Bucky Covington; he sure makes the country girls scream. Recently the former American Idol finalist blew through his hometown of Rockingham, N.C. for a victory lap, some homemade cookin' and a free concert. When I caught up with him he was fending off a group of women at a charity event. It was no less than a hundred degrees inside that warehouse, the masses were in full-on cackle and Bucky made them all feel good about being so excited. Sure, it didn't hurt that a video crew from GAC was documenting his every move - but that's just me being cynical. In fact, I probably risk a little crusty credibility every time I gush over this gangly good ole boy, but what can I tell ya? He impressed the hell out of Shannon Smith and me the moment we met him on a Hollywood rooftop some three years ago. While other Idol contestants were working on their scowls and falsettos, this former body shop worker was happily stunning the West Coast staff with his genu-wine Southern drawl, turning a simple showbiz junket into an anthropology exhibit.

Since then, Covington's excelled where many Idol winners have failed, releasing an album that debuted at number 1 on the country charts and spawned three hit singles. Heck, I even listened to it once! But Bucky doesn't need a lenslinging schlub like me hanging on his every warble. He's got a legion of female fans clamoring for his sophomore CD, a reportedly potent disc that even boasts a cover of a (GULP!) Nickelback tune. That aside, it should sell very well, for Bucky's done his due diligence, crisscrossing the country, performing with industry giants, even going on tee-vee to prove he was 'Smarter than a Fifth Grader'. Dude's come a l-o-n-g way from bangin' out dents in Richmond County. When we chatted on the day of his return we picked up on a conversation we'd last had in a Nashville recording studio. He remains the same giggly hillbilly and for that fact alone I consider myself a fan. Those outside country music may not get his appeal, but it hardly matters. Bucky Covington will still be wowing crowds with the music he loves long after the likes of Simon Cowell have choked themselves on too tight t-shirts and trendy bitterness.

And many thanks to Jimmy McDonald for use of his photo. Check out his other stuff!
Posted by Lenslinger at 6:16 PM 7 comments:

"People are just as happy as they make up their minds to be." — Abraham Lincoln 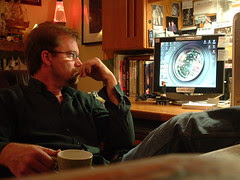 Don't know if you've noticed, but I've been awfully constipated as of late. Not the type that Pepto-Bismol helps, but more of the Ican'tgetthewordsout kind. As afflictions go, it's pretty benign - but for someone with a full blown writing compulsion, it ranks right up there with a case of the bends. I should know; I've been blogging steadily since the Fall of 2004 and in that time have endured dry spells, writer's block and explosive diarrhea of the keyboard. If it's okay with you, I'm gonna move away from the gastrointestinal analogies - if only because I live with three females and access to a bathroom is never guaranteed. So while I search for another way to express myself, know that you have my complete permission to stop reading this right now, provided you promise to stop back by later for my usual TV News poop. Oops, there I go again.

Now, where was I? Oh yeah, lamenting my lack of output and asking you NOT to feel sorry for me. See, the very fact that someone other than myself is reading this provides its own kind of solace, though I'm at a loss to fully explain why. I suspect it has something to do with that basic need for human connection, albeit the kind where you or I never have to look at each other. I'm cool with that. I spend my every working day getting up close and personal with reporters, elected officials and reprobates, only to rush back to an edit bay and stare at their mugs on tiny TV screens. Yep, I get plenty of face time. What I need is a little distance, a sequestered spot where I can put my feet on the desk and my mind on a shelf. I've been doing that for damn near five years now and the approaching anniversary is weighing on my frontal lobe. Maybe that's why I can't think straight...

Premature Admission (ewww...): I was going to pull the plug on this blog come November, hole up in my dusty lair and hammer out a self-publishable version of The Book. I even called up a few dear friends and floated the idea past them. Most liked the idea of me finally twisting my treasure into something you could take to the can, but most warned me not to suspend the website without a lot of thought. PFFFT! I wake up at night thinking about this website, what it was, what it now is, what it can someday be. You might view this place as a guilty pleasure every now and then, but to me it's the living preamble to the hardback I want tossed in my casket someday. If that means I'm possessed, so be it. From what those in the know tell me, it's exactly what you have to be to get your name on a library spine.

Soooo, to make a five year long story even longer, let me make one thing perfectly clear. I'm NOT shuttering the blog. My plans, my sanity, my ego will not allow it. These pages - and you fine folk who have seen fit to drop by now and then - have helped set in motion something I would have never done by my lonesome. That's really kind of pathetic, as it's been MY dream all along. Still, you work with what you got and I got a wealth of material, some generous friends and a book proposal to write. I may indeed SELF-publish someday, but first the professionals are gonna have to tell me I suck. Until then, look for this site to thrive - though I do reserve the right to go dark once in awhile. Just don't think I'm all that tortured about it. I'm not. In fact, I've found my early forties to be quite satisfying. No longer so unsure of myself, or overly concerned with how others see me, I am attaining a level of Zen simply by pretending to be enlightened. Try it sometime: you'd be amazed how good not giving a shit feels.

Now if you'll excuse me, I gotta hit the latrine.
Posted by Lenslinger at 11:19 PM 4 comments: 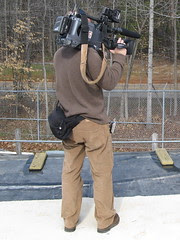 Funny thing, the fancycam. It can throw your back out of whack and strengthen your spine at the same time. Take last week for example, when I found myself standing watch across the street from what can only be described as a crack infested hovel. Okay, so officially it was a convenient store, but according to frightened neighbors and a years of police reports, it was an outlet of ill repute. Hours earlier, it had been a crime scene. I forget the details exactly; Citizen A took offense at Citizen B and chose to settle matters with a sidearm. The particulars didn't concern me. All I knew is the nice ladies who lived next door seemed to fear for their lives from the violence surrounding the store and for once they were willing to talk on camera about it. This of course enabled reporter Roxanna Haynes and I to spotlight their plight and after convincing the desk were were on to something juicy, we set about to do just that.

My heart went out to the neighbor ladies. In sad, matter of fact tones, they told of nightly gunshots, open air drug deals and conjugal visits on their children's swing sets. This of course I founds repellent, but since I lack an S on my chest I relegated my role to that of documentarian. In other words, I shot video of the locked-up shop while Roxy coaxed the dope from the two brave ladies. According to them, the business was but a front for a thriving crack trade - a claim made all the more believable when the -ahem- gentleman who rented the store arrived to open up for the day. Needless to say, he wasn't happy to see your friendly neighborhood news crew interviewing a concerned citizen outside his sordid emporium. But rather than openly protest, he simply glared,until I pointed the lens his way -at which point he draped a jacket over his head and unlocked the door. Hey, nothing says innocence like cowering under outerwear as you fumble with a padlock key...

To her credit, Roxanna and the neighbor lady followed him inside as I stayed in the parking lot and listened in on the microphone she was wearing. Through broken English he explained he was a victim too, then vehemently declined the offer of an interview. Back outside, we conferred with the neighbors before thanking them for their cooperation. That's when the citizenry of Summit Avenue began rolling up in tricked-out caddies and beat-up Escorts. Most only threw me the stink-eye as they parked and entered the store, but inside a pep rally of sorts must have been underway, for to a pimp they emerged invigorated. I'll spare you the salty syllables (my Mom reads this blog!), but let's just say they all urged me to indulge in a brisk round of carnal shenanigans, before thrusting forth certain digits and questioning my lineage. I merely informed them I was doing my job, had every right to remain on public property and politely declined their offers of parking lot copulation.

It then occurred to me, for not the first time, that a brightly logo'd videocamera is both a weapon and a shield. With it, I can stroll into a gubernatorial press conference in progress without ever worrying about the fact I'm dressed like a zookeeper. I can backpedal in front of frothing protesters and know that, whatever it is they're pretending to be pissed about, they'll slow up enough to wallow in my gaze. And yes, I can stand my ground before a vexed parade of mid-morning gangbangers - provided they don't reach down their baggy pants and whip out a gat. Even if they did, I'd probably unwisely freeze in disbelief that they'd dare to do so in front of a rolling TV News camera. Mind you, I'm no bad-ass. far from it. My interests are reading and walks in the woods. I got a hell of a Barbie collection in my walk-in attic and on the right day, a really good orange juice commercial can reduce me to tears. Dirty Harry, I ain't. But grant me my fancycam of choice and there are damn few places I won't tread.

Except a kindergarten class, of course. A cameraman's GOT to know his limitations.
Posted by Lenslinger at 7:57 PM 4 comments: