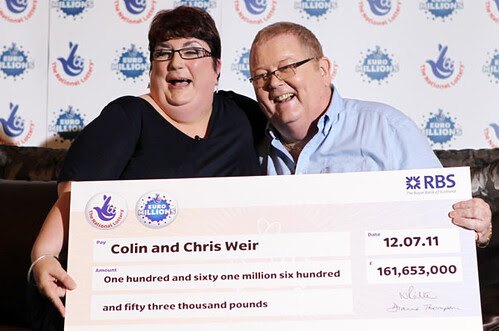 You can keep your Will and Kate (Okay, Kate can stay). My favorite power couple from across the pond is Colin and Chris Weir, the former TV cameraman (and wife) who just scored £161 Million in Europe's biggest Lottery payout. £161 Million? White-Balances for everybody! Sorry, but it's hard not to root for this working class duo with the newly engorged checkbook. He's a retired studio manager! She's a former nurse! They've been married so long they look alike! What's NOT to love? And I'm not just saying in that in hopes the Weirs will see fit to contribute to the Lenslinger Institute - that most deserving center for the advancement of cameramanthropology! No, I'm truly stoked for this bloke and his Missus, if only because career TV tech types rarely get anything but a chintzy wristwatch and walked out of the building when they've surpassed their expiration date. Hell, dude even worked a broadcast term into his official soundbite:


"When we first realized we had won, it felt like a dream. Everything went into slow motion. But it feels like a good thing; something we should not to be afraid of but for us to enjoy with the children."

As well you should, charming Scottish couple I'll never meet! Here's hoping neither of you buys an island or starts collecting showgirls or some other such nonsense that so often befalls lottery winners here in the States. Tell you what , should all that cash ever become cumbersome, why not ship a crate of it across the Atlantic? I'd gladly sink it into my own self-aggrandizement, maybe send you good people a postcard from a certain writing shack in Cabo... That or you could spend it on your own grown children; they're certainly deserving. But so help me, I see ONE paparazzi shot of you two trading whiskey shots with the Beckhams and I'm jetting over the briny blue for a full-on intervention. I'll be the one walking backwards in front of Dr. Drew...
Posted by Lenslinger at 10:08 PM 1 comment:

What sort of man reads Viewfinder BLUES? A roguish soul on constant reconnaissance, lens always within reach, a natural born distiller of minutia and mayhem. His gaze is steely, his fingertips rough. But what would you expect from a man unafraid to rock the boat and a professional fanny pack at the same time? Don’t answer that. You’ll only ruin the sound he’s recording. Careful, though. Both those elbows are considered weapons in seven different states. But this fortune hunter of sorts would rather over-light than out right fight. He’s rather parry and spin around any opponent, strike glancing blows with well-placed pans before centering up for a rock steady assault. Yes, this TV stevedore is more than assassin with panache. He’s a weathered escort of the only moments you’ll remember from tonight’s newscast. He knows where to park outside the courthouse, who to woo when the room goes stupid and what to wear when sailing over a pirate ship. Call him a cameraman and he won’t mind, but neither will he answer. He’s far too consumed with what flickers on that tiny screen, the same images you’ll soon see dance across that giant plasma perched atop your hearth. What sort of man reads Viewfinder BLUES? A master of the glass whose world view is limited only by the polish of his press pass and the glow of his cojones.

I guess that explains the wide stance.
Posted by Lenslinger at 9:00 PM 5 comments: 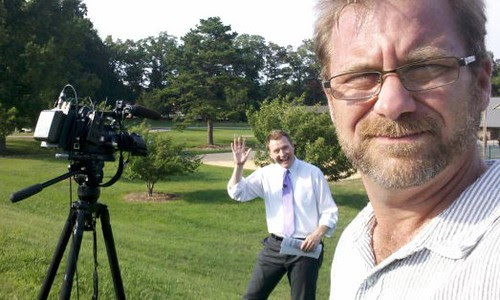 HOW hot was it yesterday? So hot the reporter doffed his suit jacket before fronting his poolside live shot! So hot the photog broke out his still camera just to stave of delirium. So hot our every newscast began and ended with dire warnings of face-melting across the Heartland, Upper Crescent, Golden Valley --  er, the six closest counties. Honestly, the great/maddening thing about being the tip of the spear is your constantly thrust in the middle of the action. If a crushing heatwave falls over your homeland, your undies will be the soggiest. If a blizzard blows in, your mustache will sport the best snotcicles. If an alien space ship hovers over the city, your rectal probe will glow the rosiest... you get the idea. Honestly, when I was in my mid-twenties, being in the middle of the action was the only place I wanted to be. At 44, I'd just as soon take your word for it that mutant crocodiles are rising from the sewer and swallowing pedestrians whole.Why, it reminds me of hurricane season, when otherwise lucid broadcasters fight each other for the right to dodge flying trashcan kids and eye-gouging pine needles.

Problem is, after you do this silly gig for enough years, all that interloping begins to feel normal. I know that when I left news for the placid world of promotions, I nearly passed out from jealousy when my hurricane chasing colleagues struck out for the coast with nothing but hubris Slim-Jims. 'That should be ME out there!, I screamed from my air-conditioned office. A few months later it was, as I shirked the duties of a house-cat hack and took my talents to the front lines. Drought, pestilence, County Commissioner workshops! For the past 14 years, I've braved them all, just so some overly perfumed executive could experience flea and tick season without ever getting itchy. That reminds me, anybody know a cure for heat-induced psychosis? Something came over me the other day while licking  humidity off the live truck and now all I want to do is run naked through the inner city. Pretty soon, I won't even be able to form whole sentences. How will I complain then?

Out of the Office

Every week I hit the street, a crusty pusher of soft and gooey news. My mission: fill a few minutes of broadcast with something that won't pollute the Greater Piedmont Googolplex. Most days I pull it off, other times... not so much. But whether I'm slingin' straight up trophy bait or chewed-up filler covered in catch-up, it's always, ALWAYS on time - for what good is that totally kick-ass super slow-mo sunset sequence if Sally Joe Housecoat flips away when the anchors start to stretch?

On Tuesday I found myself stalking that most elusive of species: the quick-turn kicker. It all began when an anchor poked his head in the morning meeting and said a single mother had crashed his private pool. This proved quite the pitch for soon after I was soaring to said oasis, where I found kids, chlorine and, warming eggs in a nearby planter, a sitting duck. Affecting my best David Attenborough, I sidled up to the wildlife and addressed her in crisp, English tones. When the young mother duck glared back as if she were about to rip my lips off, I backed away and quizzed a few six year olds in elbow floaties. A man's GOT to know his limitations.

Mother ducks are nice and all, but why not use that glass to reflect the very best of humanity? It's why I rose early the very next day and raced to Raleigh-Durham International. It was by the baggage claim I found my peoples. Rounded shoulders, lots of pockets, tripods by their sides... Seems I wasn't the only photog looking to shine a light on some world class athletes. 'Fine', I thought as I made cross-market small talk, 'at least we're not fixin' to fawn over some infantile jock with a million dollar contract. That's when the concourse dissolved into applause and a stream of gold medal heroes poured onto the floor. The next few minutes passed quickly, but the interior grin lasted all day.

Of course, every day ain't an exercise in nobility. Some days it's like pulling teeth. Of course if teeth are to be pulled, I'd much rather be a cameraman knocking over Novocaine tanks than any of those souls with hardware hanging out of their mouths. That was me Friday, as I roamed the floor of a free dental clinic. "You there! With the recent pink slip and aching jaw. Wanna be on Tee-Vee?" Didn't think so, which is why I tread lightly at these kind of soirees. Folks don't stand in line to see the dentist because they want to. Whether they want to share their woe with the region at large is their choice, not mine. Besides, there's always some untroubled soul willing to share their views with a stranger from The News.

Always.
Posted by Lenslinger at 8:44 PM No comments: