The Marines of Montford Point

While I crank out a steady diet of disposable vignettes, a friend of mine focuses on far more resonant fare. You all remember Dustin Miller - my old cohort and collaborator from The Stupid Years. Back then, he was a snickering college kid with bangs in his face and a sputtering Volvo full of REM bootlegs. Upon entry of his first TV establishment, he fell under the sway of a strangely eloquent camera-dork and together we tore through the corridors of one badly aging CBS affiliate. These days Dustin’s all growed up and living in Wilmington, where he’s the director of UNCW’s Department of Media Production. Academia, however, hasn’t encumbered Dustin’s storytelling verve. He continues to produce potent documentaries - and his latest just may be his greatest. 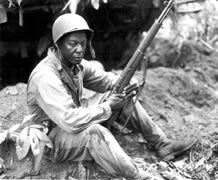 The Marines of Montford Point weaves together archival photos and survivor interviews to chronicle the segregation of black Marines in World War II. Trained at Montford Point, North Carolina, many African-Americans Marines fought and died in the Pacific Theatre and elsewhere to precious little acclaim. It’s reported that even combat photogs of the day assiduously avoided recording any non-Caucasian valor. It’s the kind of deeply woven racism that turns battle footage into war propaganda, lessening the value of those captured images considerably. Now, Dustin and company seek to reconcile this particular sin of the moving image.

Written and directed by , UNCW Professor Emeritus Melton McLaurin, the hour long documentary is narrated by Lou Gossett Jr., who bagged an Oscar for detonating his role as the explosive drill instructor in An Officer and a Gentleman.

More importantly, the Montford Marines themselves took part, sixty of them sitting down before Dustin's cameras to lead the way back through their painful, pioneering ordeal. Last week, about forty of those men attended a premiere screening, where they later commiserated with far-flung foxhole buddies as well as Gossett himself. My buddy was there too, giving soundbites to a curious press and explaining how the University is aiming for a national audience by pitching their film to PBS, BET and The History Channel. My only hope is that at some point during the gala evening, he realized just how far he'd come from roaming the halls of Channel Nine after midnight.
Posted by Lenslinger at 8:16 PM 1 comment: 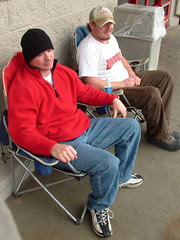 Give it up for Kevin Woodard and Michael Van Dyke - two righteous Greensboro dudes I caught chillin' by a most odiferous Sam's Club trashcan this morning. Why, you ask? They're part of the Gamer Nation, a global cabal of sore-thumbed hoodlums currently agog over the pending arrival of PlayStation 3. Since the last console I owned was the original Nintendo, I can't speak to the finer points of the PS3's staggering graphics. But I do know a thing or two about electronic obsessions and since one man's blog is another man's game box, I won't cast aspersions on the fellas idea of a good time. Besides, as I sit here warm and cozy in my upstairs lair, these cats are still fidgeting in the shadow of one smelly-ass trashcan. Here's hoping it'll all seem worth it when they're soon immersed in the wholesale slaughter of homicidal space creatures from the relative safety of their favorite couch...
Posted by Lenslinger at 10:17 PM 2 comments: 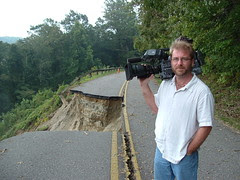 As a kid I didn’t know what I was going to do with my life, but I always knew I’d end up writing about it. (Aren’t you glad I don’t clean septic tanks for a living?) Instead, I run around with a TV camera on my shoulder, fashioning ninety second operas out of life’s random notes. It ain’t exactly the priesthood, but it sure beats harpooning sewer-lillies. Or does it? Some of those wastewater warriors make pretty good coin, and their services are in demand all over the planet. Me - I’m merely adept at showing up on some impromptu scene and acting like I belong there. Left to my many devices, I can skirt the perimeter and pull the trigger - all the while distilling visuals for mass consumption. It may sound exciting, but it pales in comparison to an unobstructed flush. At least from where I sit…Don’t ask.

Okay, now that the laptop’s stashed and I’m back in Viewfinder BLUES Central I can get back to the reflection at hand. Sorry, it’s just the way my noggin’ works. Fact is, I can’t go to the can without twisting a thesis out of stale magazines and air fresheners. Most aren’t worth the ether they evaporate into, but I can’t stop the monologues I my head if I wanted to - which I don’t. Rather, I willingly scribble my every impression in a battered notebook and keep them to myself until publication feels just. For every successful post I share, reams of snatched dialogue and broken song lyrics tattoo coffee-stained pages. Consider them the thwarted pick-up lines of a Gregarious Loner.

Which, if you think about it, makes my chosen role a perfect match for my particular personality disorder. Prone to scribbling missives, I could do no better than my role as professional observer. What better possible gig for the constipated scribe than that of calamity chaser? Where else could I scan pure coincidence for meaning, cull the maddening randomness of highway fatality for some kind of twisted pretzel logic -- Port-A-John Prophet? I think not. No, I’ll stay on point, thankyouverymuch - feigning a psuedo-literary stance that reflects the expression of all those lenslinging lifers clamoring at the edge…Heck, I know guys whose sole reaction at the sudden appearance of an alien spaceship overhead would be mild irritation that it was so damn backlit. That, is the attitude I hope to capture here and I implore you to stick with me during my periods of mental constipation.

Or don’t - I’ll still crank out this drivel by the truckload and pretend it’s worth its weight in human waste - even if it is just a bad case of keyboard diarrhea. By the way, you smell that?
Posted by Lenslinger at 9:32 PM 3 comments: 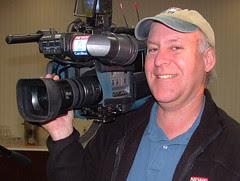 Please join me in wishing a Happy 56th Birthday to Bill Welch - a great guy to hang out with at a train wreck, peace rally, county commissioner meltdown or double homicide. In fact, I can't think of a single tense incident this veteran wise-ass hasn't mollified with his biting patter and ever-present ballcap. An elder Jedi of the Piedmont News Council, Bill's been materializing at the edge of imbroglios for longer than I can truly fathom. In that time he's achieved a street-level Zen of sorts; a prolific insider with a vast knowledge of back roads and happenstance. In other words, Dude's been a-round... 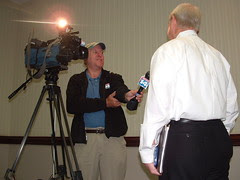 But all that newsgathering has not always been a few scratches on the soul. One simply cannot log as much time behind the glass as Bill has without occasionally getting a few shards in the mind's eye. From heated regime changes to missions improbable to the gutless bloodshed of a thousand newsroom wars - Bill's been there, and he's usually classed up the joint. These days he's back where he belongs, slinging a news lens and espousing the virtues of his new employer. As for just how many years he's been at it, I can't quite say, for every time Bill tells me I lose consciousness and wake up with a headache... I hate when that happens.
Posted by Lenslinger at 8:55 PM 2 comments: 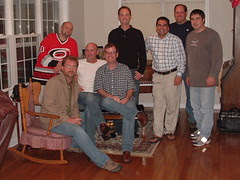 Sweeps, Kids, Wife - they're enough to keep a cameraman away from his beloved blog. But fear not dear reader (Hello?), regular posting will soon resume. Until then, click on this hours-old photo and see what twenty years does to a bunch of dorks who once considered themselves high school revolutionaries. Remember kids, this could happen to YOU...
Posted by Lenslinger at 8:05 AM 4 comments: