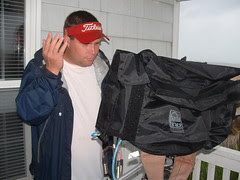 We don't have alot of photog turn-over in our shop. That's why it's a big deal when a long-timer leaves, which is the case with one Wesley Barrett. Seems the Roanoke Rapids native slash diehard State fan has tired of chasing clamor in the Piedmont and is blowing off our fair series of 'burgs for Capitol City. There he'll shoot his share of monuments, nutjobs and politicians in a bustling D.C. bureau. No doubt Wesley will excel, as he has the chops to thrive in any venue - even among the many windbags he will encounter inside the beltway. Speaking of windbags, it was during Hurricane Ophelia that Wes made his most memorable appearance here on Viewfinder BLUES. 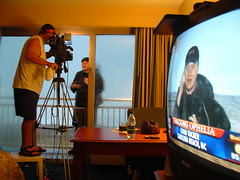 In this shot - one of my favorites - Wes can be seen executing an early morning satellite shot from the comfort of his hotel room. Having spent my own dawn outside shooting video and dodging flying trashcan lids, I was grateful for the temporary shelter and the granola bars! Not that the fellas noticed. Chad Tucker - the lucky reporter we'd lashed to the balcony, was filing his umpteenth live report of the morning, his image popping up on every other channel of the hotel's cheap TV. Fishing out my digital, I fired off a shot and inadvertently immortalized Wes in ... less than formal attire. It's no biggie in my book, but to a guy normally so nattily dressed, it's immediate webification couldn't have been with out a cringe or two.

Thanks, Wes. Knock 'em dead in D.C. Wait! Let me rephrase that!
Posted by Lenslinger at 7:13 PM No comments: 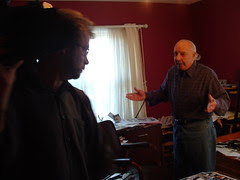 Due to the limitations of my digital camera, this picture just doesn't do justice to today's encounter with Matthew Lewis. But how could a hastily-taken shot compare with the work of this revered Lensmaster? It can't. In the quarter century he wielded a 35 millimeter for the Washington Post, Lewis captured shot after staggering shot of century-shaping events. JFK's funeral, Martin Luther King's 'I Have a Dream' speech, the launch of Apollo IX, Vince Lombardi at his zenith: this third-generation photographer was there - and the images he walked away with usually became icons.

Today he enjoys semi-retirement here in the Piedmont, but he's still willing to walk virtual strangers through his jaw-dropping portfolio. Reporter Caron Myers and I dropped by to take a peek at his old White House shots of former President Ford. Mr. Lewis obliged and even threw in a rambling tour of his incredible career. Leafing through his tattered masterpieces, I shook my head in in awe at the pony-tailed old man beside me. Though he claims to have wandered through history quite by accident, his indelible images are the hard-won trophies of a fierce competitor. It was then I realized I had a new hero.

And that was before I noticed the dusty bronze medal hanging off a downstairs doorknob was in fact a 1975 Pulitzer Prize.
Posted by Lenslinger at 6:54 PM 3 comments: 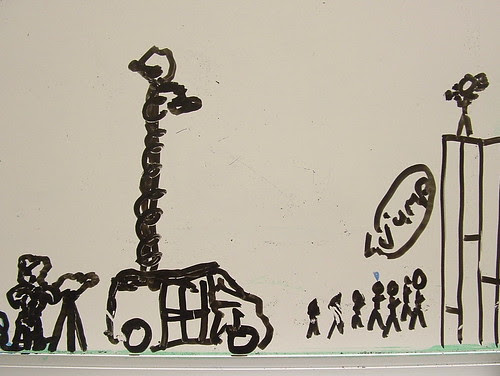 The new dry-erase board at work is proving itself a frightening portal to the darkest reaches of the photog psyche. In the above recently discovered hieroglyphic, a lone shooter wields his lens from the edge of a great precipice, while his co-horts zoom in from below and an angry mob chants enthusiastically for his death. Jeez - maybe we should get the fellas a cheese-log or somethin'...
Posted by Lenslinger at 12:02 AM 2 comments:

Get the Widow on the Set 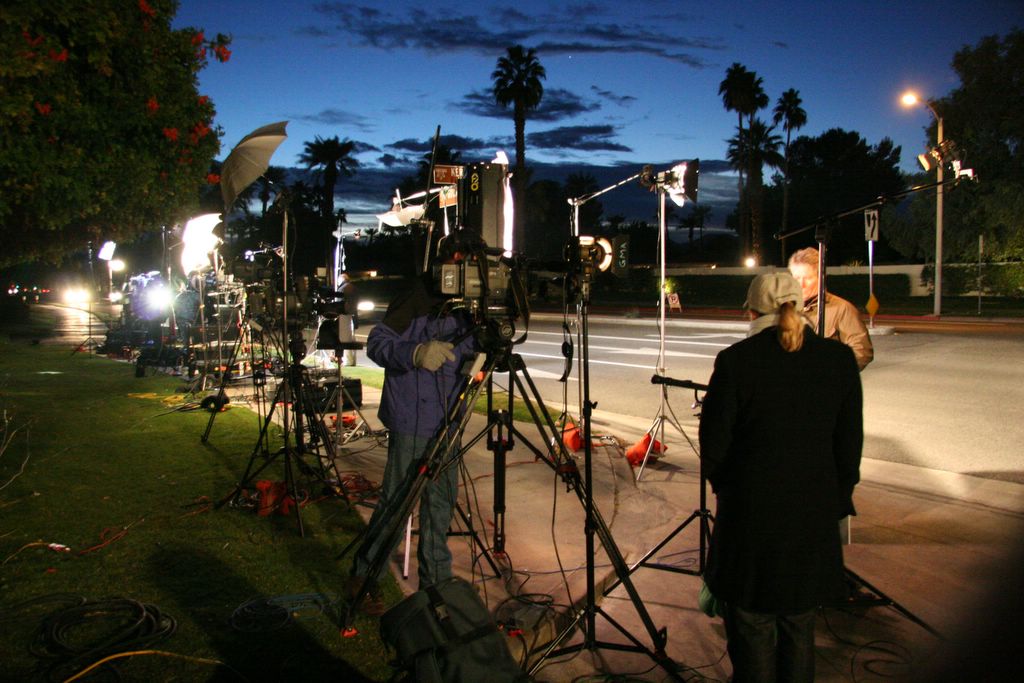 While I was stewing on how to add to the Gerald Ford death smotherage, the great beFrank delivers this press-orgy postcard from lovely Palm Springs. The L.A. photog was but one of many West Coast news operatives bivouacing overnight outside the Ford Estate - all so the morning hairspray brigade would have a suitable perch from which to furrow their brow. In our media-saturated 24/7 world, the late night passing of an ex-President is highly-crafted commodity before the sun ever breaks over the Executive Deathbed. From sleek obituaries already 'in the can' to the instant phalanx of Presidential news experts, we of the chattering classes have electronic retrospect down to a fine art. I'm not complaining, mind you - just noting what an ever-ratcheted Information Rennaisance we currently find ourselves in. Just ask beFrank, whose recent jones for decent spot news is probably diminishing with every hour of lost sleep.
Posted by Lenslinger at 9:48 PM 1 comment: 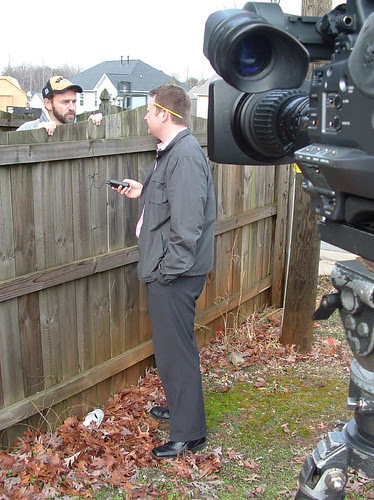 I've interviewed folks through prison glass, from hot air balloons and via dual interpreters...but I don't think I've ever collected soundbites from someone across a fence - until today. You see, 'Wilson' here didn't see the flames, didn't hear the fire trucks and didn't even know his most unlucky neighbor. None of which discouraged him from telling Chad Tucker and a region full of viewers all about it today, of course - as long as he didn't have to leave his yard.

Sometimes, this job is too easy.
Posted by Lenslinger at 8:58 PM 4 comments:

Stuck Behind the Lens 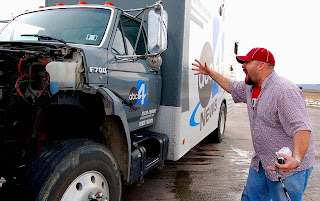 (SLC, huh? Wonder if he knows Fields Moseley?)
Posted by Lenslinger at 2:00 PM No comments: 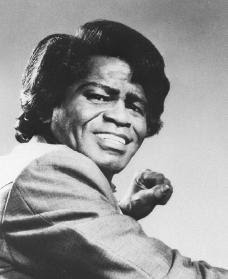 As A white guy from the sticks, it took me years to fully appreciate the Godfather of Soul. In fact, I never gave him much thought at all until the movie Purple Rain hit theaters while I was still in high school. Suddenly on a quest to become a Prince completist, I collected the Purple One's earlier work, unknowingly nodding at the inevitable James Brown comparisons. Still, I'd never spent much time with Mr. Dynamite's body of work until years later, while apprenticing as a commercial cameraman. Saddled with producing an upscale ladies dress shop spot, I set up my lights at the local country club one night and ushered giddy golf wives past my lens.

The very next day I locked myself in an edit bay, where I sliced the resulting footage to the requested sounds of "I Feel Good". Only problem was, the song is well over thirty seconds, - the alloted runtime of my theater of cheese. Unwilling to lay down the first or last half-minute of said tune, I whittled away all day at the staccato horns and bawdy howl of the Brown's trademark tune. When I finished , the re-mix featured a beginning, a middle and the familiar crescendo end. But as any editor will tell you, you cannot replay a trillion times without the ditty seeping into your DNA. Thus, to this day, whenever I hear "I Feel Good", I think of that marathon edit-sesh, the truncated results and the slow-motion frolic of well-heeled housewives spinning in sequined glory.

I just hope the ghost of James Brown will see fit to forgive me.
Posted by Lenslinger at 9:49 PM No comments: