For This I Payed Tuition? 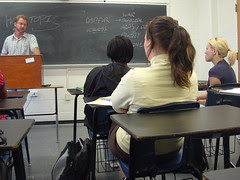 A big dip of the lens to my colleague Brad Jones, who invited me to talk to his Broadcast News Writing class at UNC-Greensboro today. The topic: TV news, emerging media, on-line writing and of course, ConvergeSouth. Through it all, the students politely feigned interest while I rambled on about blogging and such. Some even managed to stay awake!
Posted by Lenslinger at 5:59 PM 2 comments:

When a Fox News photographer used his cell phone to transmit the first live ground pictures of yesterday’s plane crash, the pictures were blurry but the implications were clear. Camera-phones are an official part of the newsgathering arsenal We first saw the now ubiquitous gadgets used in this way during the London subway bombings, when bystanders and victims clicked grainy shots of the crippled tube’s interior. But the NYC crash coverage was the first time a major news organization fully embraced the technique, streaming the pictures live for a nervous nation to absorb.

Fuzzy footage from a minuscule device might not seem like a big deal on a story covered by helicopters and countless fancy-cams. But in the world of breaking news, success over competitors is measured in increments. That’s no doubt one of the reasons why FNC broadcast the images, and why you’ll see much more of the same in future calamities. For now the pictures procured from cell phones leave a lot to be desired. That will change as the technology improves. Even before that, news outlets will use the camera phone pictures of their staff and everyday folk, with little thought to framing and composition. That’s a good thing, as information is power - even if you have to squint a little to make it out.

Why, even your humble lenslinger goes nowhere without a tricked out cell phone capable of recording and sending both still images and limited video clips. I’ll use it too - if I can ever figure which buttons to push. Weaver?
Posted by Lenslinger at 7:14 AM No comments:

This Blog's For You 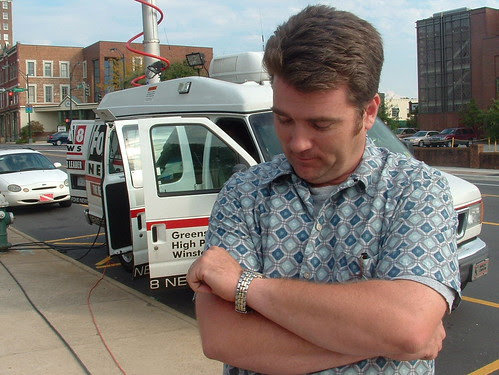 Meet The Photog - a student of the moving image, a master of time management and a lover of snazzy shirts. Normally you'll find him darting around town in some garish vehicle, moving at the speed of broadcast while mere humans shuffle about in slow-motion. It's precisely this momentum that keeps our hero on-task, for without it, pulling off the improbable on a daily basis just wouldn't happen. That's why it's so hard for him to loiter by the curb as his over-coiffed partner pounds out a script in the back of that rolling billboard. Chances are he'll only get a few minutes to turn her words into a symphony of sight and sound. His reward for meeting such an unreasonable deadline? The opportunity to do it all again tomorrow. And credit? Forget it.

Sure, a camera-toting colleague may notice a particularly well-lit sit-down or comment on an intricate edit, but nine times out of ten his efforts will go unrewarded. At best, his reporter will receive an accolade or two for all her hard work - but the kudos usually stop there. Don't feel sorry for him, though. His shifts are rarely dull, his misadventures are many and his on-the-job anecdotes crush those of mortal men. Whatsmore, his breed has an undying fan in yours truly. It's these multi-tasking, singularly driven individuals who inspire me to write every night. In doing so, I hope to expose their noble plight to a larger audience - even if I do tire of pretending to be one of them. Now move along, showtime ain't for another fifteen minutes...
Posted by Lenslinger at 7:19 PM 5 comments: 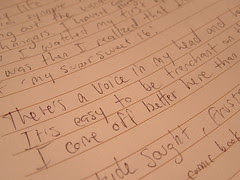 Should ever I perish in an unsavory way, there’s one item I’d like to avoid being judged on. It’s a burgundy, vaguely Bible-esque notebook - one I’ve spent the better part of a year filling with my own sacred text. That said, you’ll discover no revelations inside. Instead, you’ll find only bent prose, half-finished idioms and the occasional attempt at outright cartooning. I call it The Sore-Hand Companion. It is but the latest in a long line of tortured tablets. Bound in leather and of generic bookstore origin, it’s the grown-up version of the countless composition books I hoarded as a kid. Recently I unearthed a few of those adolescent tomes and, besides learning Lizard King lyrics seem most profound when locked in the throes of puberty, I realized I’d always been a writer.

Well, maybe not a writer, but at the very least a scribbler. From Hawkeye Pierce one-liners to the cleverest of half-finished paragraphs, I have practiced the art of scrapbook manifesto since I was knee-high to an adverb. Trouble was, I did little more than save these homemade diatribes. Convinced that everyone dictated their interior monologues, I gave little thought to my growing collection of tattered spirals - even if I couldn’t bring myself to throw them away. Now, as a gregarious loner who’s embraced the voice in his head, I savor the chance to take my notebook lover out to lunch - to sit in a corner booth of some soul food palace and take my pen, and my mind, out for a spin. Just where all these aborted manifestos will take me remains unseen, but - wretched penmanship aside - all this chicken-scratch lyricism has made for a very interesting trip.

Now if you'll excuse me, there's a Red Hot Chili Peppers song I simply must capture in print. How does one properly annotate 'No chump love sucker', anyway?
Posted by Lenslinger at 10:38 PM No comments:

Sixteen years cranking out ninety second vignettes hasn't taught me everything, but this, this, I know...

The average sheriff deputy will hack through a mile and a half of heavy underbrush to chop down a half dozen spindly pot plants if enough TV cameras tag along.

A certain breed of reporter will build his or her entire story on the one sound bite that is visually jarring, completely out of focus or barely audible.

There is no convenient time for a plane crash.

Late, noisy entrances to packed press conferences are simply unavoidable and should be judged solely on style.

Some news stories are impossible to produce, but the mass majority of them can be successfully executed merely by showing up on scene.

People watching their every possession burn are infinitely more compelling to photograph than the fire itself.

Millions of dollars of intricate and sophisticated broadcasting equipment can be rendered inert by one neglected nine volt battery.

Women who spend an inordinate amount of time on their appearance will readily shun the camera. That guy in the gravy-stained beefy-T will talk all day.

With the right sunlight, even shattered windows wrapped in crime tape are beautiful.

No one is more cocky, swaggering and cynical than the 20-something show producer who rarely ventures outside the newsroom.

Trophies, awards and accolades past are great, but your immediate colleagues will only remember you for that piece of crap you put on air last week.

5 out of 10 PR people are downright delusional. Most of the rest are merely useless.

The only folks more irrational than those who wave weaponry at police can be found ogling for face time at the County Commissioners meeting. 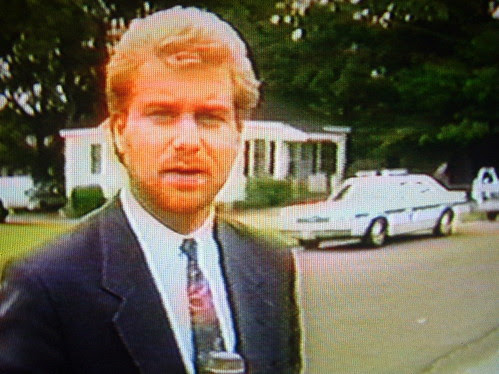 Okay, so maybe I never had the locutionary chops to succeed long-term as an on-air reporter, but as this 1991 self-shot stand-up proves, I damn sure had the hair. Weaker men have crafted whole careers out of lesser tresses...
Posted by Lenslinger at 9:25 PM 1 comment: