Schmuck Alert: Lash at the 'Stache!

A mumbling suspect, a judge named Fudge and one crazy-ass crumb catcher... This Schmuck Alert has EVERYTHING! 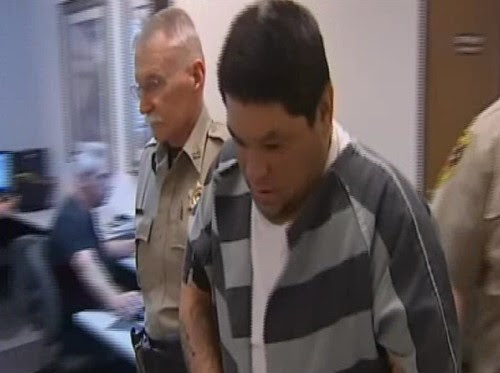 It happened in "Texoma" - one of those bifurcated states recognized chiefly by TV stations. That's where accused murderer Jerry Joe Garza makes a habit of disrupting justice any time he's dragged out of his well-deserved cell. This time, he merely mumbled profanities at the bench, prompting Judge Barney Fudge (let that wash over you for a moment) to give him thirty additional days for contempt! This irked the accused brute, but he waited until deputies marched him OUT of court to demonstrate his displeasure. In the hallway, Garza lunged at KFDX Photojournalist (and friend of the blog) Jake VanDonge. Whether or not Garza was trying to harm VanDonge or merely scare him remains unclear, but that doesn't matter, for the unwise action prompted deputies to execute a jailhouse take-down so swift, so fluid, I had to watch it like eight or nine times to fully savor it. You should too, but you'll have to visit the station's website, for they don't make their videos embeddable (embeddable?).

That in itself is WHACK, but no more so than the legal argument Garza's attorneys tried to float before their client ever rubbed the floor polish off his teeth.

Seems the lawyers thought video of Garza acting like an animal might sway future jurors, so they huddled with VanDonge and His Honor for the required wrangling. In the end, Judge Fudge (you heard me) decided Texomas's favorite NBC/FOX affiliate could keep their footage, provide that next time, they bring enough to share with the class, er, court. As for Jerry Joe Garza, well, who really gives two shits about Jerry Joe Garza? With any luck, they'll fit him with one of those masks that made Bane so angry in the latest Batman flick. In fact, there's only piece of unfinished business left. Toward the end of the piece, we catch a glimpse of Jake VanDonge - a nice enough looking fellow who's Three Musketeers mustache seems strangely out of place. WHY the twisty lip whiskers? It's all for Men's Health, you Luddite! Seems Jake grew the damn thing for charity and pretty soon he'll shave his flavor-savor for God and Country. What a guy! What a Mustache!

What a Schmuck! (Garza, not VanDonge - or even Judge Fudge! God, I could do this all night!)
Posted by Lenslinger at 10:04 PM 3 comments:

...When last we saw Lenslinger, the methodical 'tog was leading a dangerous mission through a week long dimension of overnight shifts... 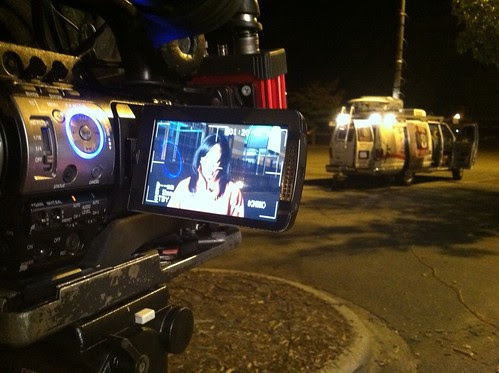 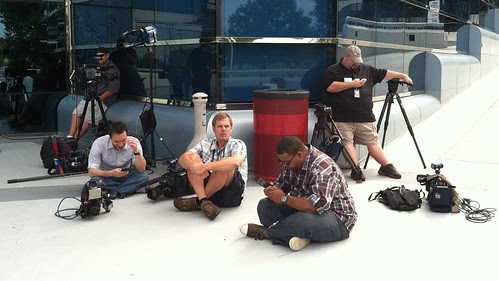 They may look harmless, but this motley clot of operatives can bathe the airwaves with toxins or truth, poison water cooler talk with drops of honesty and spread a great malaise across the land. Not bad for some former camcorder dorks! I can say that, 'cause I'm one of 'em. And while my shoulder roll is well within specs, my powers of perception are off the chart. It's what allows my type to plop down and chill, shut out the world and just go numb, all while sweeping the perimeter with a jet pilot's eye. At least that's what we tell ourselves as we hover over timelines. Truth is, we're no more qualified to fly than your average pizza delivery guy, but watching life zoom by on a tiny screen does  leaves us diving for the horizon. You'd scurry, too - if both bailiffs and waitresses yelled "Hey Mom" your way.

As any TV stevedore who's schlepped for more than a fortnight will tell you, it's an eye-opening experience. Grimacing Senator, Star Command Drop-Out, Self-Proclaimed Mermaid: at one time or another they've all clamored for my camera's affection. Fend off the gang at Occupy: Waffle House a few times. You're sense of security (not to mention smell) will be left scattered, capped and shattered. So if you happen upon a huddle as such, approach with extreme caution. Their corporal form and aptitude for lassitude belies a pack animal's paranoia. Yes, these students of insouciance are trained to frame and poised to pounce. They are the foot soldiers of the Fourth Estate and upsetting their scrum would be no more advisable than stepping in a bucket of rattlesnake. Isn't that right, fellas? ... Fellas?

You know, if I'm gonna talk you up like this, you could at least put your phones down.
Posted by Lenslinger at 5:44 PM 1 comment: