By now even my Mom has seen the video of two TV station live trucks drag racing outside El Paso. But late as I am to the finish line, I came to compete - for what kind of self appointed pundit would I be if I didn’t jump all over such easy fodder? Don’t answer that; just know that I’m still a bit befuddled as to why two grown photogs would trade sound judgment for positive crowd response. Whatever the reason, a civilian with a cell phone caught it all on chip and before either news shooter could gas up his ride, a clip of their not so mad dash had gone viral. Welcome to 2008, gentlemen. Pick your nose at a stoplight for too long and you may end up on YouTube. Reenact that scene from Grease with two rolling billboards and you may very well get booked on Larry King.

Trouble is, the chiselers who own your chariot may not be abused, as one of the drivers in the aforementioned drag found out when his bosses walked him off the property, after seeing their mobile newsroom burn rubber at the local track. Amid the hoopla that surrounded the strangely unsatisfying clip is the fact that had this motorized showdown been staged by some Promotions Guru, it surely would have taken home the Emmy. Instead, a pair of photogs had some ‘splainin’ to do. While only one has to polish his escape tape, it’s a safe bet the other will be watched a whole lot closer whenever he pulls off the lot. Meanwhile, I’ll think twice before blowing past that school bus full of cellphone wielding hellions out on the interstate. Heck, I may even stop speeding in the breakdown lane!
Posted by Lenslinger at 10:10 PM 2 comments:

Lies of My Demise 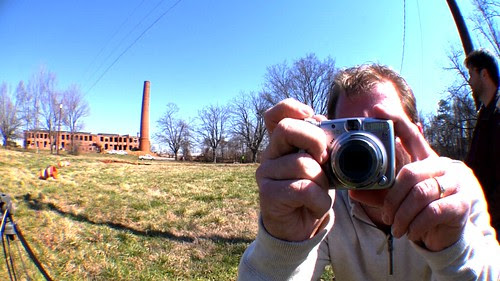 No, I've not been sucked into the belly of a hovering spaceship - but parts of last did resemble Uranus! Plainly put, I was busy. Paternal obligations and a ramped-up news cycle made for several long days and as a result, I neglected you, dear reader. This pains me more than you, for my writing compulsion and needy ego requires I purge opinion or allegory between dusk and dawn. Maybe that's why I ain't been sleeping well; adjective back-up in the cerebral cortex. Now I'm gonna have to apply some kid of salve, that or lock myself in my upper lair and pound out epistles 'til I quiver and drop. But since I told the kids I'd take them to the reenactment tomorrow, it's unlikely I'll forgo sleep altogether. So bear with me, would ya? Between squiring my offspring to costumed revolutions, I vow to indulge in enough linear thinking to catch up my half dozen readers on all my many misadventures. For now however, grab a seat while I extend Big Ups to The Mangler - a gravity-defying Gen-X'er who wittles multimedia for the local paper. No shame in that game, my friend - especially when you're savvy enough to flatter a battered cameraman with a double reverse close-up. Wish I had your fish-eye....
Posted by Lenslinger at 8:15 PM 1 comment: 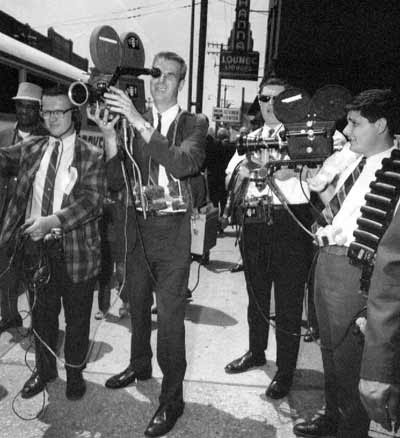 When exactly the standard dress for news photographers went from Sunday School Teacher to Roadie with a Logo I don't know -- but I sure am glad. Don't get me wrong, I have nothing against a snazzy plaid sports coat, but I just can't fathom chasing ribbon-cuttings and drive-by shootings dressed like an insurance agent. So go ahead, blame the coarsening of our society for that photog who looks like he slept in his clothes. Me, I credit the guy on the left.
Posted by Lenslinger at 10:17 PM 2 comments: 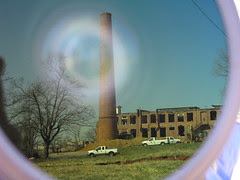 Several times a year an inanimate object will capture the fancy of The Fourth Estate, prompting otherwise logical newsgatherers to lose their freakin‘ minds. The last time it happened around here a water pipe broke beneath the pavement, a giant hole swallowed a car and me and my pals spent a solid week broadcasting from the edge of the abyss. I’m not saying the public didn’t need to know about this hole in the road, but after awhile the continuing team smotherage of Pothole ’07 felt a little silly. As helpless as I was to stop it at the time, I did recognize that a stationary object had gained enough momentum to propel several news cycles. 'Sinkhole Inertia', if you will. Well, it’s happened again. This time however it’s no waterborne depression, but rather a crumbling old industrial chimney that’s stood ignored for the better part of the last hundred years. That is until developers bought the old Cotton Mill shopping center and proceeded to knock the bitch down. As the first bricks began to fall, news executives across the Piedmont stood up, took note and paged an underling. That’s where I come in… 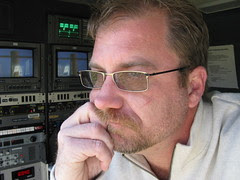 Before a few weeks ago, I’d never heard of the old Cotton Mill on the corner of Spring Garden and Merritt. Not having grown up here, I did not toil in its basement, did not shop in its latter day retail space, did not shed a tear when it stood empty for all those many moons. I did however grumble a bit when I rolled up on its broken landscape only to be kicked off the property by the scary old man from all those Scooby-Doo episodes. That was more than a month ago and since then, many of my colleagues have returned to turn their own Cotton Mill story. Just ten days ago, live trucks from across the Piedmont gathered on the perimeter to watch the fabled(?) smokestack drop. It. Did. Not. Seems the demolition crew was feeling all pioneer like; instead of the usual blasting caps, they stuffed the chimney’s base with a chemical charge and stood back. An emasculating ’poof’ of smoke appeared and the smokestack stood defiantly in place. Cheated of their delicious frenzy, the News Gods shook their glittery fists and vowed to hype the pipe another day… 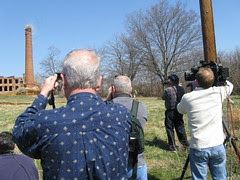 I rolled up before eleven. With the detonator plunge a good two hours off, I had my run of the grassy knoll, but nary a moment to spare. The noon producers wanted a live shot throughout her show and the El Ocho web geeks wanted to stream it on-line just as soon as I could plug all the gizmos together. So I did, wondering all the whole who watches an old chimney sit still from the comfort of their laptop. By the time 12:30 rolled around, I’d satiated the producers’ needs, locked down a mast cam shot and bugged out for lunch. Fifty minutes and one cheeseburger later, I returned to find my lonesome knoll crawling with photogs, camcorder Dads and a few stoners who’d just stopped by to soak up the mojo. Snap! Like a cheetah I lunged at the nearest available prey, snaring him with my wireless microphone and inane questions. I got so carried away I nearly missed the moment, thanks to a one-minute warning horn that preceded the implosion by, oh…about five seconds. Luckily though I was within reach of my lens and zoomed in smoothly enough not to risk dismissal by the National Board of Cameramanthropology. So too did the dude I’d just interviewed. Handing him my digital camera, I turned back to my fancycam and hoped he wouldn’t run off. He didn’t! Instead he captured the very moment the dynamite ignited, handed me back my baby and scurried off before I got his name.

Oh well. Maybe I 'll see him the next time we're all hovering over some rockpile, gas puddle or grilled cheese sandwich that's holding us all hostage. For now, check out what one time-pinched lenslinger can do with a descending chimney. Heads up!
Posted by Lenslinger at 8:15 PM 4 comments: