Have Wedgie, Will Travel 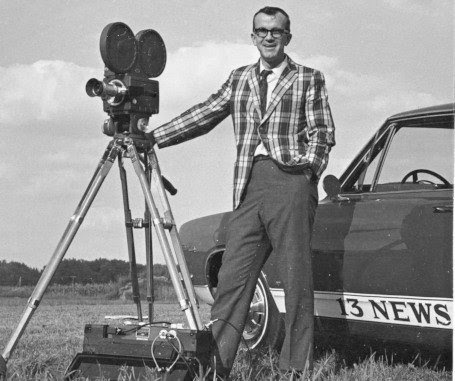 Once (or twice) in a generation, a man, his machines and a moment come together to define the very times. Such was the case with Marvin, whose life finally came into focus the day he scored the coveted 13 News gig. Before then, life had had been less than swell. Chicks didn't dig his mothball collection, his Mom's jalopy always left him stranded and the fellas on the corner threatened to burn the wool slacks off him whenever he grew too nosy. But now, all that was about to change... he could feel it. With a flashy new fancycam, a logo'd muscled car and a totally chief new Madras jacket, this Chinese Checkers champion of 1959 was about to make his mark on the not so fruited plains. If he was lucky, an exclusive or two might earn him a raise and he could get that new seersucker suit off lay-away. After all...

...you can't look this good on a photog's salary.
Posted by Lenslinger at 8:00 PM No comments:

Attack of the Show 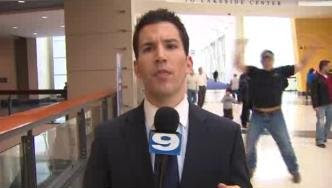 I'll grant Pat Tomasulo this much: Dude's got grapes. While most notably a sports anchor for Chicago's own WGN, this mild-mannered reporter is serving as an avenging angel of sorts for frustrated news crews the world over. See, no matter what populated spot you set your camera up in, somebody's gonna stomp into your shot and act a fool. Spastic arm flailing, extended shout-outs, the occasional gang-sign: there's no telling what even the most sophisticated pedestrian will do when he or she spot a fancycam in action. (Remember, they don't call them 'asshole magnets' just 'cause it sounds cool.) Now, St. Pat is collecting payback and the results are both cringe-inducing and hilarious (depending on which side of the lens you find yourself)...

The set-up is simple: Erect a fake live shot, wait for the gawkers to invade your frame, then pounce. At this, Tomasulo is masterful. He, spins, he cajoles, he berates. More times than not he invites the overly curious to join him on camera, where he seamlessly begins quizzing them on their incontinence, unwanted body hair or average looking babies. On paper it sounds like some infantile Howard Stern skit, but our man Pat delivers the goods with such a straight face, such reporter earnestness, you can't help but laugh along (an hope he doesn't get his microphone shoved down his gullet). Then again, perhaps I'm biased. Those folks were only being friendly! They didn't deserve the shame, the castigation, the unsolicited advice on erectile dysfunction...

Then again, I didn't deserve that awkward rebel yell on the overpass the other day, the unmistakable finger messages, the half filled Slushee cup hurled my way...
Posted by Lenslinger at 10:25 PM 2 comments:

A Gift for It 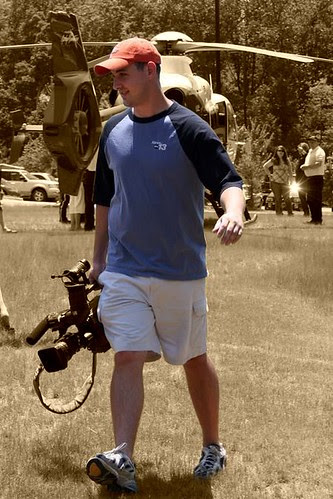 (VIA Ashvegas) Two months after a young photojournalist fell to his death, the community college that helped shape him has established a scholarship in his memory. John Billingsley earned his Broadcast Production degree from Isothermal Community College before advancing to Appalachian State University. After interning at the WLOS Rutherford County Bureau, he gained employment at the station itself and quickly proved himself a favorite of his new coworkers. All of which made his sudden death one of the most shocking news items his friends ever processed. Now, they - along with John's parents - have started a scholarship in his name. The scholarship will cover tuition for a second-year Broadcast Production Technology student at Isothermal. Administrators hope Billingsley’s family and friends will help fund the scholarship for years to come. It's a fitting tribute to a young man on the cusp of his career. John's time behind the lens was short, but he quickly proved he could do a lot more than just carry a camera...

“John had a passion for videography, a zeal for photography and a very good eye,” said Coomes, a Broadcast Production Technology instructor at Isothermal. “One of John’s greatest talents, though, was his ability to put people at ease when he was interviewing them. You can’t really teach that – how to make someone comfortable when there is a camera in their face, often in stressful situations. He had a gift for it. Hopefully, this scholarship will help students follow in John’s footsteps for years to come.”