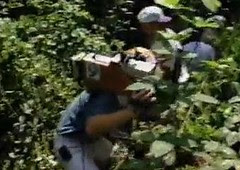 As marijuana eradications go, it was pretty weak. An armful of spindly plants, some overheated deputies and a far higher 'slog to weed' ration than I found logical... But truthfully, it was a buzz just being there. That's because it was 1992 and I'd yet to overdose on the thrill of the hunt. It wasn't my first pot-pull (please - no jokes!), but it was an early one and my field training was far from complete. When I noticed Photog Elder Woody Spencer pointing his camera at the the media pack, I looked forward to seeing what magic he'd craft from it. I just didn't know that nearly two decades would pass before I got a peek... 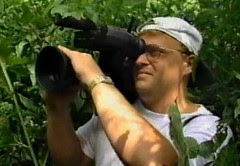 Seems Woody sold The Suits on a story about news crews themselves. His weekly features, Woody's World, were brilliant and I learned something from them every Friday evening. Still, I was a little surprised his bosses let him turn his camera on his office mates. But by doing so, they commissioned a rolling thesis on my biggest mentors, starting with this guy: Paul Dunn. Part good ole boy, part car salesman, ALL photog, Paul didn't teach me how to use a camera. He taught me how to take it to interesting places. I could write books on our many adventures, but for now, know this: TV News became a less interesting place the day he left the business. 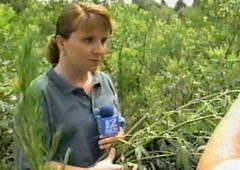 But even swashbucklers have better halves. In Paul's case, it was his then girlfriend/now wife: Carolyn Kusbit. A forthright young woman from Pennsylvania, Carolyn was the kind of person my Father might call a Yankee. Watching her assimilate into the not so deep South was always a kick - until she started kicking ass and taking names. As a local reporter she was exacting, relentless and annoyingly committed to the truth. Our many, many crime scene conversations were the very basis for my humble blog and yellow tape billowing in the breeze still brings her cackle to mind. In Woody's piece, she comes off as Holly Hunter's character in 'Broadcast News'. That's no act - but it was a limited appearance. A full blown educator now, she was recently spotted defending her dissertation. You go, Dr. Dunn! 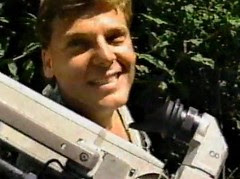 As talented as we deeply believed ourselves to be, nobody held a candle to this cat: Andy Cordan. A whirling dervish of lenses and machismo, Andy perfected the cop-car ride-a-long well before Bertram Van Munster pioneered COPS. Though I never could quite fully emulate his chutzpah, his balls-out approach to news-gathering left deep, deep imprints on my neophyte psyche.I still have a fond memory of Andy shoving a lens into a freshly shackled bank robber’s face and ’suggesting’ he show more emotion. Unlike Paul, Carolyn or even Woody, Andy Cordan is still at it, pounding the means streets of Nashville. If you see him down there, say 'Hi' for me. Then get the hell out of his way.

But enough of my rambling; just watch Woody's piece below. If memory serves me correct, it never aired, as Woody's bosses decided it was too 'self-serving'. (Pfft! What must they think of reality show contestants cluttering up newscasts now?) Thus I had to wait nearly 20 years to see just what my elder was up to. I should have known it would feature me floundering...

The Doctors Will See You Now... 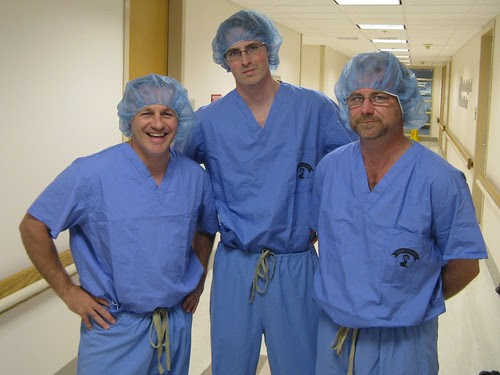 In the latest episode of 'SCHLUBS', things get hinky on the surgery wing as a few visiting news crews slip away from a prostate operation photo-op and begin terrorizing both patients and staff. It's all harmless grab-ass at first, but when the rogue photogs towel-pop the wrong proctologist, a fist-fight ensues that threatens to quarantine the entire hospital. Special Guest Star Lou Ferigno as the overzealous security guard who restores order by tasering the trio until they shriek like little girls, soil their purloined scrubs and offer to shoot ANYONE'S daughter's wedding if only the big green guy will lay off the zapper. Viewer Discretion Advised.
Posted by Lenslinger at 9:30 PM 1 comment:

Three Men and a BabyCam 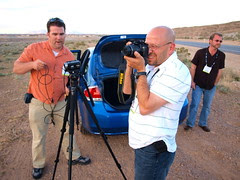 Okay, so we TV News Photogs may not take the most elaborate trips - but our vacation videos are OFF THE CHAIN! At least that's the case with this latest moving picture opus featuring our Vegas adventure. Minutes after landing back in Raleigh, Chris Weaver began whittling away at all the footage we'd brought back - on a brand new editing system, no less! (Final Cut Pro, if you must know. Did I mention there's a gleaming new Mac in Team Slinger's future?) Anyway, the resulting clip has EVERYTHING: Bad Acting, Simulated 3-D and enough shots of my thinning hair to make me finally blow some coin on that bottle of Rogaine. But enough about me - how about that Weaver? and Rick? And Adam? And the soon to be featured Amanda Emily? Without any of them, none of these indulgent videos would have ever seen the light of day and you'd have no real idea what a goober I am in person. Come to think of it - whose idea was this anyway? I just wanted a quiet few days in Vegas: play a few slots, maybe take in a show... Now I gotta defend myself to the Photog Nation just 'cause we broke an axis or three, ditched our light kit and stuffed a rather large Californian in a rented sub-compact! Pfft! Like you don't do any of that on YOUR vacation...

Anyhoo, that's the last you'll hear about NAB 2010 for a while. It was great fun hanging out under no deadline but our own and to anyone who appeared in our silly little videos, I'd just like to say: Don't sweat it. Dignity is way overrated. Now, go watch these bloopers and be thankful you're not in them. Kinda wish I wasn't.
Posted by Lenslinger at 3:37 PM 3 comments:

Have YOU Seen This Man? 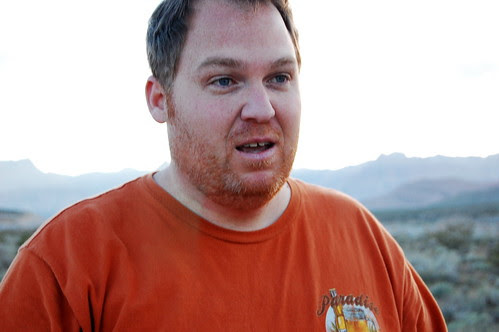