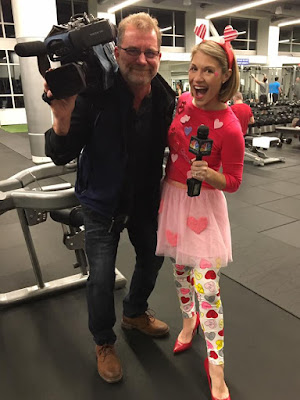 Carry a TV News camera around long and someone will tell where you to stick it. Usually, you see it coming. Body language is a steady tell, pack mentality can get you killed, even your own logo can turn on you in the flash of a bigot's eye. Yup, it's dodgy out here in the shit. Which is why a seasoned news crew tries to avoid dangerous places whenever it can (9 out of 10 times, it can't).

Biker gang hangout, active crack-house, any Chuck E. Cheese: there are plenty of places I'd rather not take my gear. But when the train carrying secret government lunar juice jumps the track, crashes into the psycho hospital and creates a new breed of murderous moon zombies, someone has to try and score a sit-down with 'em.

Luckily, the television camera is a powerful weapon. It's got a pistol grip, a rolling barrel and crosshairs to spare. Aim it at the right person in the wrong way and you could instantly alter their life. Folks know it, too, and whether they admit it or not, the mere sight of a casually carried camera can affect their every behavior.

Don't believe me? Roll into a water park with your lens aloft. You'll see Soccer Moms who can't swim throw themselves in the deep end - all so you won't put their least favorite body part on the evening news. Walk through a reality show audition tent with thing on your shoulder. You'll come out of there with whole new relationships! And the urge to shower.

But you don't have to head to Hollywood to feel the white hot hatred on display at the nearest political rally. (Sad!) Or the steaming resentment coming off the early morning workout crowd, just because you barged into their gym with a live TV camera and a reporter dressed like some kind of weird love elf.


"You there, with the bulging eyeballs and barbell on your neck, put that silly thing down and come tell the good folks of the Upper Valley Heartland Crescent just what Valentine's Day means to you!"

Looking back, we were lucky to get out of that one alive.
Posted by Lenslinger at 9:46 PM No comments:

I was - AHEM - googling myself the other day when I stumbled across this previously unseen clip. It's an excerpt from last year's podcast with Christian Parkinson, a ten minute dirge in which I prattle on about hoarding Granola bars and driving through mud puddles. It's pretty meta, alright, but if you're into bleary dissertations about keeping cameras dry from a guy who clearly needs more sleep in his life, who am I to judge? I just wish I'd splashed my face or something before firing up the Skype thingie.

I look like my Dad on a bender.
Posted by Lenslinger at 3:12 PM No comments:

A Message From Our Staff... 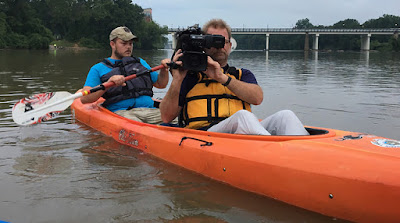 Here at The Lenslinger Institute, we believe in granting certain senior faculty members extended leaves of absence. Erratic and unannounced, these epic visionquests are a curriculum quirk unique to the field of Cameramanthropology -- as only sudden, seemingly stupid safaris can truly emulate the bug-eating wonder that is modern day news-gathering. At least that's the way our founder explained it, before fetching his boy Otto and escaping upriver. That was nearly a year ago and though we cursed his name and burned his stuff the moment he was gone, we never denied the fact that one day his goofy ass would return. Well, here we are. His Lenslocity rolled up on shore an hour ago, reeking of spent deadlines and live oysters. He won't say where he's been, only muttering something about a missing microphone and island harlots. We on the Senior Advisory Board can only trusty our enigmatic leader has been stewing in his lagoon again. That or dude scored a righteous freelance gig and he's holding out on the rest of us. Either way, the Earl of Churl is back and he seems to wanna fire up the blog again.