A Brief But Needed Reprieve... 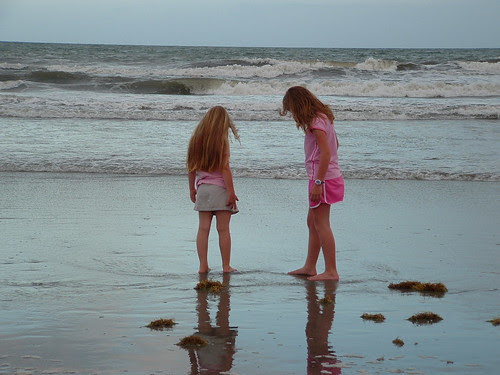 Asleep at the Wheel

‘Hours of boredom, punctuated by moments of sheer terror’. I’ve heard variations of this quote used to describe everything from combat to flying to accounting, but it could be equally applied to TV news (though you’d probably have to replace ‘terror’ with adrenaline, frustration or dread, depending on the assignment). Take today, for instance: After cruising the mean streets of Burlington in a live truck, Jeff Varner and I parked our rolling billboard alongside a row of half-finished houses. Given the choice, we would have made a bee-line for the air conditioned confines of the station, but the suits back at the shop wanted our ‘ex-textile employees turned construction worker’ story fronted LIVE(!), so we settled on a burgeoning neighborhood outside the lovely town of Elon as a suitable backdrop.

Of course, show-time was a good four hours away, which was damn convenient since there was an awful lot of work to do before the director could punch up our shot. After polishing off a most delicious milkshake, Jeff crawled in the back of the truck and began reviewing the footage we shot before lunch. As he culled coherence from a disc of jumbled images, I exited the vehicle and ‘got my photog on‘. Triple-checking the airspace above the truck for any potentially deadly power lines, I raised the mast and set up my camera while the telescopic pole slowly inched upward. By the time it reached its full height of fifty-something feet, my mobile studio was ready. After pointing the dish toward the nearest receive site, I called an engineer back at the station and quickly established the shot. With all my immediate duties fulfilled, I did what any self respecting news shooter would do: I crawled back into the A/C and caught some shut-eye.

Utilizing the awesome power-napping skills I once honed in the Navy, I reached a passable state of driver seat slumber within mere moments of settling in. As I dozed, the sound of interviews recorded an hour earlier wafted into the front of the cabin, providing an unlikely soundtrack to my erstwhile dreams. Behind my eyelids a familiar scenario unfurled: A crowded bookstore appears before me, eager patrons fighting for space amid a jumble of folding chairs. Each member of the overly attractive crowd holds a glossy hardback bearing the title ‘Viewfinder BLUES’. Spontaneous applause breaks out as I take the podium. Scanning the crowd, I take special note of the C-Span 2 camera staring back at me. In the lens’ reflection, a version of me stares back, teeth whiter, jaw squarer, clothes better fitting. As I begin speaking in a voice far deeper than my own, the weirdly telegenic crowd leans forward in anticipation of my unquestionable brilliance.

I go on for what feels like hours, but the pretty listeners never seem to tire of my anecdotes. Instead they lean forward in their seats, squirming with satisfaction and unbridled glee. Even the C-Span cameraman at the back of the room appears enthralled, totally immersed in whatever I have to say. As I speak, a scuffle breaks out among a group of Hooters waitresses as they fight to be the first to approach the Q&A microphone. I simply smile, revealing impossibly deep dream-dimples. Sensing the time is right to take a few adoring questions, I defer to the leggy blonde who won the hard-fought battle to be the first to bathe in my puffed-up prose. Tossing her golden mane back, the Jessica Simpson look-alike parts her pouty lips and summons the nerve to address the genius author in her midst...

“Dude, Keith’s on the phone. He wants to know if you can work mornings next week...”

Suddenly the crowded bookstore, the breathy bimbo and the C-Span camera are gone. In their place, the dashboard mast control panel stares back indifferently. Looking to my right, I saw Jeff’s fist thrusting my own battered cell phone in my direction. I took the phone, and listened to my chief photographer’s British accent. As he spoke, I notice the dashboard clock had traveled a full three minutes since I first fell asleep behind the wheel. After hanging up the phone, I leaned back in the seat in hopes the dream I’ve dreamt a thousand times before would once again reappear, but of course it didn’t.

I hate when that happens.
Posted by Lenslinger at 11:34 PM 7 comments:

Schmuck Watch: Kenny Gets Off

Just when I thought I had nothing to blog about today, an arbitrator reinstated camera-hating goon Kenny Rogers to the hallowed halls of professional baseball. Apparently some dolt by the name of Shyam Das felt sorry for the pampered millionaire and ended his 20 game suspension. Rogers will return to the Rangers for Wednesday night's game at Boston, and his $50,000 fine will be converted to a charitable contribution, no doubt so the grossly overpayed pitcher can write it off on his taxes.

For those who don't know, Kenny Rogers threw a world-class tantrum back on June 29th, inexplicably wrestling a camera off KDFW photog Larry Rodriguez's shoulder, throwing it to the ground and kicking it for no discernible reason. In doing so, Rogers further tarnished an already troubled pastime, sullied the name of a hirsute country music singer and forever earned the wrath of the photog nation.

"There is a standard of behavior that is expected of our players, which was breached in this case. The arbitrator's decision diminishes that standard and is contrary to the terms of the collective bargaining agreement. In my opinion, the decision is seriously ill-conceived," he said.

Ill-conceived, indeed. It's beyond pathetic that a swaggering athlete can openly assault anyone he damn well pleases, only to be coddled by the leaders of the institution he so openly defaces. Were I ever a fan of the sport to begin with, that would now promptly change. Instead I'll continue to badmouth Major League Baseball and villify Rogers at every juncture. Schmuck.
Posted by Lenslinger at 5:02 PM 6 comments:

We are headed into the post-media age...or so claims Jeff Jarvis in an intriguing article on where all this over-communication is taking us. In it, the well-known blogger contends that the internet isn’t merely a new form of medium, but rather a whole different beast altogether. To make his point, Jarvis points to the interweb’s most striking feature - the ability to enable conversation. No other ‘medium’ allows the kind of two way interaction inherent on-line. Books, magazines, newspapers and newscasts - they’re all tricked-up versions of one-way communication. Now, with readily-accessible and user-friendly software, Al Gore’s prized invention is reaching its potential. For now we call it the blogosphere, a swirling mass of self-made web pages that grows larger and more dense with every passing moment. Whether or not this roiling cloudbank of vibrant voices and cyber-clutter will ever coalesce remains to be seen, but as Jarvis notes, it ain’t blowin’ over anytime soon.

Transparency… open-source… distributed data… aggregation… search… links… All of these enable the conversation. None of these are characteristics of media as we have known them.

On this we agree, though I contend we’ll still consider the internet and blogs part of the media - at least until we come with a better name for it. (Think the term ’blog’ is lame? I got two stupid words for ya: Information Superhighway.) Jarvis’ larger point could be summed up thusly: Blogs and the modern internet have just started changing everything about the way we communicate. To chalk it up as merely a new wing of the media is grossly underselling it. It’s like describing the Space Shuttle as just another form of transportation.

Jarvis goes even further by pulling the coroner’s sheet back to reveal one of the first victims of this communications overhaul: the novel. Relax, no one’s claiming the Age of Fiction is over, but it’s safe to say that modern day literature doesn’t pack the punch that it used to. Whereas the Great Unwashed once looked to fabricated stories to expose certain truths of the universe, these days we merely twitch a fingertip for more current event coverage and global analysis than we once thought possible. I’m not saying books, movies and other works of art will cease to exist, but I don’t think they’ll ever hold the general populace as completely enrapt as they did say, oh…back when the movie ‘Titanic’ came out. As for books in general, Jarvis makes his most startling admission:

Weblogs have also had an impact on my view of books. Since I started writing this weblog a week after 9.11 and since I became addicted to reading the weblogs of so many good writers in this fairly new medium, I find that I have less patience for authors in the oldest medium. I get impatient with books that drag themselves out to justify book length and the book deal…

Ouch. I don’t know Jarvis but I can assure you this latest divulgence didn’t come without a little pain. Successful writers like Jarvis (and struggling schlubs like myself) worship books, we dissect them word for word, hold them under late night lamplight and marvel at their power. I type this now from a spare bedroom filled to the ceiling with tomes and chronicles, leather-bound editions and tattered paperbacks that I count among my most prized possessions. Ever since my mother taught me how to make thoughts out of carefully-aligned letters, I’ve been addicted to the written word. As a young kid devoid of the athleticism my small-minded peers demanded of me, books were very often the only ally I had. To this day, I lay awake in the early morning darkness and fantasize about my name on a book. I always have and I always will.

But I’d be lying if I said I read books like I used to. Whereas I use to pour through novels at a frightening pace, I haven’t read two consecutive works of fiction in years. Instead I’ve spent the last decade or so devouring TRUE stories, from too damn many How-to-Write manuals to all those salacious tell-alls to my beloved collection of nautical history. I made the switch to non-fiction merely because its what interested me, though I suspect I was subconsciously trying to make up for my lack of formal edumacation. Whatever the reason, it’s more than a little startling to watch pundits and the like embrace my particular proclivities. If I didn’t know better, I ‘d think I was a little ahead of my time- a literary visionary with eyes and mind intensely focused ten years down the road. But that would be silly, for I am just a photog - albeit one who knows a great article and a few undeniable truths when he sees them. 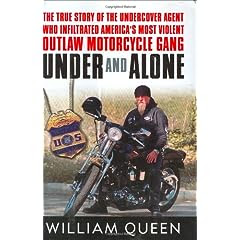 Now if you’ll excuse me, I have a few more pages left of William Queen’s most enthralling ‘Under and Alone’ - a soon-to-be-filmed true account of a local lawman’s immersion into the world of the notorious Mongols’ Motorcycle Gang. Perhaps if we’re lucky, they’ll make a blog about it...
Posted by Lenslinger at 8:38 PM 3 comments: