Run my mouth as I do, there isn't much I can add to this spectacular photo. Which is a good thing, since I know precious little about it - other than friend of the blog Sean Browning took it of reporter Jennifer Bjorklund nearly five years ago in San Antonio Heights, California. Sooooo, say it with me... "D-u-u-d-e." There. Don't we all feel better? Oh - and the title of tonight's entry? It's a maxim every good TV News photog lives by - whether they credit a supreme being or simple celestial alignment for The Golden Hour. Me, I blame the ancient Egyptians. Everybody knows those cats sported totally tricked-out light kits.
Posted by Lenslinger at 11:32 PM 3 comments:

Barbarians at the Tape 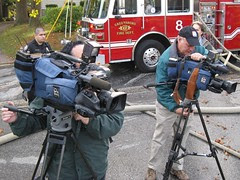 One might think my slice of Carolina would be a pretty quiet news market. One would be wrong. With three TV stations and a 24 hour cable outfit, you can't swing a dead press release without hitting at least a few camera crews. Throw in something as dire as an apartment fire and a battered fleet of TV vans will materialize, their logo'd poles thrusting above the tanker trucks. Inside those vans, reluctant jackals gather their gear before high-stepping over hoses. They are The Photogs: a loose cabal of Ordinary Joe's who convene at the strangest places. Fewer humans make me feel so at home... 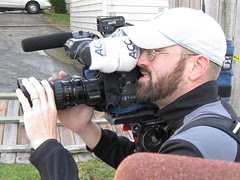 Not that it's a love-fest. Sure, the level of cooperation among competing news crews is higher than any of us will ever admit. But those of us who found ourselves pacing around the Holliday Apartments parking lot didn't cut short our morning mirror time just to bump knuckles. We came to wage television. That means more than picking a perch. Yeah, the attached snapshots may show stolid technician types hunched over their tools, but the actual players are rarely so static. No, we're immersed in a quiet game of oneupmanship. Call it Parking Lot Chess, The Awkward Waltz, Four News Crews Battling for A Limited Number of Soundbites. Whatever, just stay out of my shot! 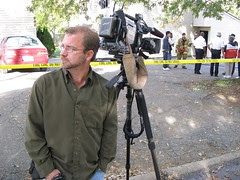 Okay, so we're not that rude. You can't be when you know you'll face off with the same fellas at the next head-on collision, city council debacle or dog in a hole story. So you go easy, take only video, leave only generator fumes. That doesn't mean you twiddle your thumbs while the victims evaporate. Rather, you profile the crowd for the ousted, the stricken, the chatty. If that sounds crass, well, you have no business gathering news. If you did, you'd know that - for better or worse, people WANT to talk. Not everyone, certainly, but I can't think of many news scenes where someone didn't willingly step before the lens and dispense with the details. Haven't had to pay anyone yet. So watch how you judge those overly-logo'd jackals.

Some of my best friends are overly logo'd jackals.

Pondered While I Wandered... 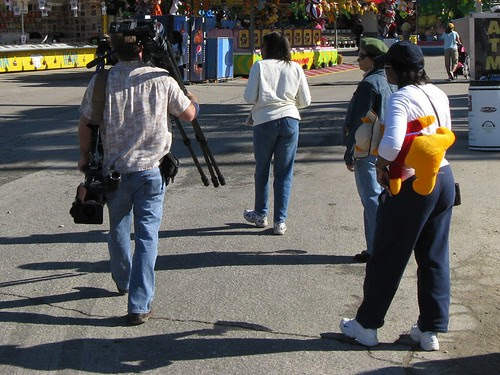 Many quandaries crossed my mind as I schlepped around the North Carolina State Fair on Wednesday. None had easy answers...

9.) Did I just traipse through WRAL's noon live shot?

8.) Are those Goth Kids still following me?

6.) Was that Criss Angel holding a giant Sponge Bob Doll? Or the other way around?

5.) Seriously. How much could a golf cart cost?

4.) Would the Missus still let me hang one of those Lynyrd Skynyrd mirrors in the playroom?

2.) Did I really just get heckled by a middle aged gypsy in skinny jeans?

1.) Could it have been SO HARD to pay attention in high school?
Posted by Lenslinger at 11:15 PM 2 comments:

"Dude, you have the most interesting job!" It's a phrase I've heard a lot over the years and it's certainly true - especially if by interesting you mean 'vexing', 'exhaustive' and 'thankless'. It's all that and more. Just don't call it 'glamorous'. It ain't... 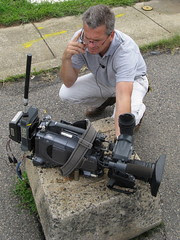 Case in point: the pre-show phone call. Whether you're tuning in a live shot or just trying to figure out why tendrils of smoke are rising from your fancycam, you'll probably be forced to call back to the station for some 'technical support'. While it's not exactly like dialing Calcutta, it's not without its language barriers - especially when the engineer on the other line starts in with the dreaded tech talk. Look I'm a photog - not an astronaut! I don't sketch circuit boards for fun and I ain't big on manuals! There's a room full of people down the hall from you who are counting on a dog in a funny hat story in exactly 22 minutes and if they don't get it we're gonna have more problems than your broken flux capacitator! AAAAAUUUGGGGHHHHH! ... Hello 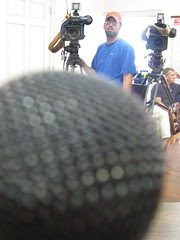 A-hem. Where was I? Oh yeah, half asleep on my feet while the mayor yammers on about his new plan to paint the underside of all city-owned manhole covers in time for the sesquicentennial. Take Me Lord. Ya know, in the movies all press conferences end in some kind of bombshell announcement, usually followed by a car chase or some kind of montage. In real life, they drone on for far too long - first they they spend twenty minutes recognizing everyone in the room, then they mention a half dozen folk who couldn't make it but send their regrets, then they rush through the prepared statement someone who makes triple my pay wrote for them. By the time they get to the question and answer period, I'm so brain-dead I can barely recite my station's call letters, let alone form cogent inquiry.

They say getting there is half the battle. They're wrong. It's easily two-thirds. Don't follow? You've obviously never received this urgent phone call: "Stew! Spot News! A transfer truck hauling medical supplies just jack-knifed along that dead stretch of I-40 in Cornole County! There's colostomy bags splayed for a hundred yards and traffic's backed up FOR MILES! We need you to roll! And don't foget to wear your safety vest. Sherrif says he'll lock up any nimrod who shows up without one!" That's about the time I regret daydreaming in school all those many years, then I dig some old school Metallica out of the glove box and get in the zone. You'd be surprised how far you can drive in the breakdown lane if you just act like you you're desperately needed on scene. Logos help, too. 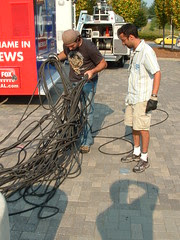 "It's not the live shot. It's the breakdown." I cannot tell you how many times I've told that to a young reporter as I took their cellphone and handed them a gadget to pack. See, when you've spent the last ninety minutes of your day going live(!) by the bake sale/train wreck/drive by, there's nothing you want more than to flee the scene of the crime. But like the toddler who's been playing Caped Crusader all day, you can't have snacktime until you put all your bat-toys up. This can be done a couple of ways: like a junkie trying to hide his stash before the cops bust in, or like a forgetful fisherman fondling his favorite lures. I try to aim for somewhere in between, but I'm good with either approach, as long as everything's packed up and ready to go by the time the mast collapses.

Now if you'll excuse me, I have to go scrub the glamour from my fingernails...
Posted by Lenslinger at 6:54 AM 5 comments: