The Loss of Knotts

Where I come from, this man is a God. That's because, along with every other resident of the Tar Heel State, I grew up watching in awe as Jesse Donald Knotts embodied the greatest television character of all time, Deputy Barney Fife. Now Mayberry's finest is gone and I myself am ready to turn in my badge. Having interviewed Howard 'Ernest T. Bass' Morris and even Andy Griffith himself, I'd always hoped to meet the man at one of the Mayberry Day events I cover in Mt. Airy from time to time. Alas, it will never be, for we have lost a statesman. Don Knotts was born in West Virginia - but he'll always be a North Carolinian to me - a squirrely, nervous, bug-eyed deputy whose misplaced machismo is outmatched only by his comic timing and physical brilliance. If anyone needs me, I'll be in the den, watching my Mayberry DVD's and clutching a single, unspent bullet.
Posted by Lenslinger at 9:50 PM 4 comments:

My partner-as-of-late Shannon Smith told of an encounter today that eerily illustrates how a certain hyperbolic talent show has engulfed both our lives. She was preparing for an early morning live shot at a local fire department when she overheard two burly guys in turn-out gear, chatting over coffee. It went, I'm told, a little something like this:

"Ya see the little bald dude sing 'Dead or Alive'?"

"The one from Rockingham? Ain't he got a twin brother?"

"I hear ya - hangin' out in Hollywood sure beats banging out dents for a livin'..."

From the corner, Shannon stared slack-jawed as the two firefighters gabbed about the news story they'd seen the night before - a local feature she'd written 18 hours earlier. 'You people are talking about MY WORLD,' she thought as the morning photog cued her from behind his lens.

Ever the pro, Shannon nailed her morning live shot. But she has good reason to feel a little punch-drunk. Since returning from our press encampment in Beverly Hills, we've both been busy doling out the bounty in bite-size chunks. You'd be surprised how much material you can pull from two 90 minute discs. As it stands, I could produce a nightly tie-in on each of the 24 contestants well after many of their burgeoning careers are long finished. Whirlwind showbiz junkets will do that. Shannon tells me it's just getting started and she should know. Having tracked Fantasia from the second before she walked into her first audition to the moment America coronated her a temporary sensation, our lovely morning reporter knows a thing or two about the juggernaut in question. I too, have have multiple close encounters with the beast, from chasing Clay through a crowded rotundra to fending off crazed Fantasiacs in the bowels of Greensboro Coliseum to parting a sea of hopeful vocalists in our nation's capitol and here at home...When will this silly show stop haunting me? WHEN?!?

Not for awhile, apparently - which leaves me a little torn when it comes to my humble little shelf here in cyberspace. I do NOT want this to become an Idol blog, no matter how much the subject matter swells my site meter. But from the beginning, this living compendium has been a real-time reflection of my days behind the lens. Right now, that includes the world's dorkiest singing contest. While I don't want my association with the show spray-painted on my tombstone, it's providing a welcome detour from the never-ending onslaught of crime, grime and ribbon cuttings. If I weren't crafting this high-quality tripe, I'd be down at the courthouse with a finicky live truck, a frazzled reporter and a pissed-off defendant. That's a repeat I don't need. So bear while I slog through the pablum of American Idol. I promise not to post too much about it, as I simply don't want to attract too many Claymates, or Bucky-bots, or whatever moniker these eerily obsessive enthusiasts are using this season. Not that they don't bring their friends. More Than a Thousand Hits in One Day - not bad for a guy who used to get excited about breaking 100 in 24 hours...
Posted by Lenslinger at 6:27 PM 4 comments: 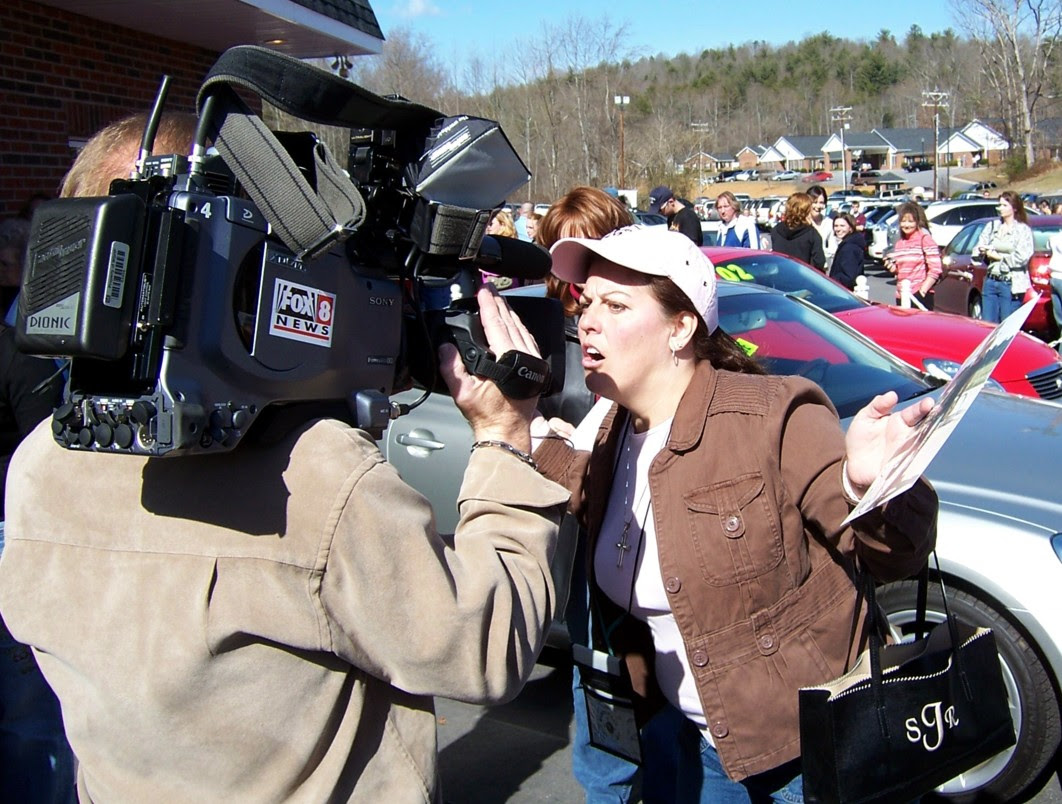 Much love to Fawn Roark of The Mountain Times for sending me this photo of a rabid Keith Urban fan attacking my lens last Friday. As I mentioned in last week's post, the female pandemonium outside the singer's fan appearance was nothing short of apocalyptic. The woman pictured above was the slobbering embodiment of this fervor, displaying a purse-swinging, teeth-gnashing style of idol worship that brings to mind certain Stephen King novels. Newly separated from her husband, the lady who called herself 'Susan' danced a veritable jig for my camera just seconds after she thrust her digits into the hands of one understandably uneasy Keith Urban. I, of course, locked on to the woman's mania from across the room and followed her outside for a post stalking interview, whereupon she gave me the kind of histrionic soundbites we news shooters play over and over and over for our photog friends... Trust me, you would too.
Posted by Lenslinger at 10:42 PM 7 comments:

With a twist of the wrist, I shut off the engine and silenced the Man in Black. As silence flled the interior, I sat stock-still behind the wheel, not really wanting to move. When the windshield refused to turn into a magic looking glass, I let out one last heavy sigh and rolled out of Unit Four. Around back, I popped the tailgate and ran through a systems check ingrained in my DNA. Camera. Batteries. Disc. Tripod. Microphone. Light. After draping myself in the tools of the trade, I scowled at the heavy microphone stand that was mocking me from the jumbled cargo hold. Giving it a heave, I grabbed a stack of cardboard signs and flipped through them. 'What was your BEST Valentine's Day Gift?' the first one asked. I rolled my eyes and read through the rest, my lips moving in silent dictation. 'Of all the dorky assignments...' I thought as I tucked the cards under one arm and picked up the mic stand with my only free hand. Once I achieved the proper ballast, I trudged toward the Mall's front entrance. Overhead, a few bored parking lot seagulls made lazy circles, oblivious to my pain.

Inside, Center Court was fairly packed for a Tuesday morning. The crowd of shoppers, mostly women with strollers, bags and the occasional atittude didn't notice me as I made a beeline for the escalator. Those who noticed the logo on my low-slung camera did do a double-take, but only to look past the loaded-down roadie for that regionally familiar face. When their cursory search came up empty, they went back to their search for lunch break bargains. That was fine by me, as I was on the property to bag some sound, not any win fans. Grumpy and encumbered, I schlepped toward the promised relief of the mechanical staircase in the distance. When I finally reached the bottom step, I rested the mic stand's heavy round base on it and shifted my weight under the load. Up ahead, two heavily perfumed ladies stopped their conversation long enough to stare at the camera-leper. Behind me, a group of teenagers boarded the moving steps and began to giggle. Unmasked derision aside, I was beginning to feel better about the whole silly endeavor.

By the time the predicatable ride dispensed me on the Food Court level, I was bristling with determination. Scanning the assembled masses, I looked past the requisite Chik-Fil-A crowd and studied the traffic patterns. A few furtive glances later, I determiened the best place to set up shop was where I stood - right by the escalators. Avoiding the uncomfortable stares of a four-top table full of workmen, I busied myself with deploying my gear. First, I extended the microphone stand to chest-high altitude, sank the hand mic into its cuff and squatted beside my camera for a series of ritualistic flip-switching. Once all recording systems were go, I began the methodical process of tripod leg extension. As I pulled the sectioned legs to a man-sized height, I glanced down at the cardboard signs scribbled in red, I drifted back in time to the summer of 1991.

When Perry Farrell brought his inaugural Lollapalooza tour to Raleigh-wood, I was one of the thousands of would-be degenerates in attendance. But I didn't go alone. Instead, I traveled to the all-day music festival with Sam and Mar, a wonderfully Bohemian young couple known more for their odd-ball artistic abilities than their sound judgement. Along with the beer and blankets, Sam and Mar brought with them a large stash of what can only be described as hippie necklaces. Crafted from beads, hemp-rope and discount crystals, the counter-culture jewelry was always a big hit with those still raging at the machine. Sam and Mar had been up for days twisting the hideous neckwear into creation and together they harbored secret dreams of unloading them at the concert for twenty bucks a pop. Trouble was, neither knew much about sales. Thus, the crowd of nose-ring posers and tye-dye zombies ignored us as we set up shop between the Rock the Vote tent and body art display. Having quickly grown bored with our lack of retail success, I did something that day I'd never done before: I worked the crowd like a carnival barker. In a voice I didn't know I had, I challenged every subversive teenager that passed by our booth to stop and tell me how they could live withOUT one of these intensely mystical necklaces. My first sell came after I spotted a young girl in an orange hippie dress and matching orange mohawk.

"You there, sister!" I bellowed as I grabbed an orange necklace from the display,"that's quite the ensemble, but ya know - NO outfit's complete without one of these..."

To my utter shock. she seemed flattered at the sartorial attention and immediately bought the necklace I'd chosen at random. This, of course, only bolstered my confidence and I browbeat the crowd until they couldn't ignore me. Soon unwashed hands thrust twenty dollar bills in our direction, thanks mostly to my newfound ability to bullshit at will. Within an hour, Sam and Mar ran out of merchandise and we retreated from the tent to the open lawn, where we enjoyed Nine Inch Nails with overpriced beers and a few other hastily procured favorites. By the time Jane's Addiction took the stage, my spontaneous salesmanship was all but forgotten...

Until that very moment at the Food Court, when I spotted a rather hefty lady in a red sweater adorned in hearts and matching hair-bow about to step off the escalator.

"You there, Madam!" I bellowed as I reached over and hit the record button, "that's quite the ensemble, the kind of outfit that tells me you know a thing or two about affairs of ther heart! Step over here and tell my camera what your WORST Valentine's Day gift was, would ya?"

She did. Others followed and forty five minutes later I was back in Unit Four, singing along to 'Ring of Fire' and chewing my own Chik-Fil-A. Who says photogs can't sell?
Posted by Lenslinger at 8:34 PM 5 comments: