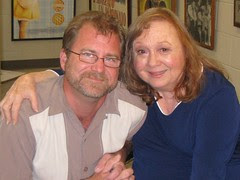 When I first met Betty Lynn a few years back, I didn't know who she was! Bob Buckley and I were surfing the crowd outside the Billy Graham Library dedication and he struck up a conversation with a most delightful redhead. Imagine my shock when halfway into the chat, I realized the jolly septuagenarian seated before me was none other than Thelma Lou. Thelma Lou! For those of you living off-planet, that's THE Thelma Lou - rock steady girlfriend of one Barney Fife - protector of Mayberry, keeper of bullet. Understand, The Andy Griffith Show is damn near religion down here. It's been showing on television non-stop since before I was born and while I was never the completist some of my friends were, I knew enough to be devout. So when I met the charmer that brought Thelma Lou to life, I did what any Southern boy would do: I told her how much I loved her. Betty laughed and said she knew. A friendship was born.

Which is why I bristled a bit when I heard she'd been robbed. Last Sunday Betty was leaving a Mount Airy shopping center when some jackhole snatched her wallet from her hands and ran off. Cops caught the fiend but Betty got less than half her money back. Clearly, this was a job for Lenslinger. Not quite a crime-fighter, I knew the most I could do was spread the accused man's mugshot across the land and score a visit with my favorite 80-something year old in the process. So, with the help of Bob Buckley and our mutual friend George Sappenfield, I uncovered the location of Mayberry's Sweetheart and headed that way. I found her holding court at The Andy Griffith Museum in Mount Airy. She was charming a room full of travel writers and I hung back until they were through asking questions she'd answered a million times. When they cleared out, I moved in. Betty didn't really want to publicize the incident - but because she'd never met a cameraman she didn't like - she consented. What followed was a most pleasant interlude as Barney's gal and I kibitzed like old school chums.

The TV piece below that resulted from my visit won't change much. Betty's fine and the tool that tried to make off with her lunch money is in sitting behind bars. But I enjoyed smearing his ugly mug across the land, and any reason to hang with the Miss Lynn is a good one. Here's hoping The Accused runs into some hulking Mayberry fan down in County Lock-up who will remind him how unwise it is to eff with Betty. Now go find your own 80 year old to hug. 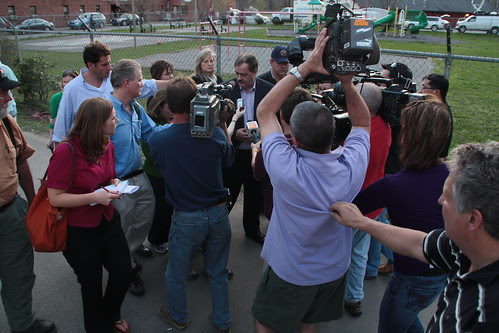 Wanna totally throw off that pesky media scrum? It's easy: grab the back of any TV photographer's shirt and pull. He'll follow. Of course when he realizes you've led him away from the defendant and toward that soup kitchen, he'll probably want to brain you with the tripod he left in the truck, but hey - you're the one with nothing to do. The point of the matter is most photogs operate on pure muscle memory. Whether we're covering a hero's homecoming or a fresh felon's first stroll to the pokey, proper camera management only requires about 37 basic moves - 35 of which consist of walking backwards with one eye shut. Couple that with our natural herd mentality and you have quite possibly the key to media control. Just remember, what I'm about to jokingly suggest is highly ill-advised. If you cannot withstand a beatdown out by the satellite trucks, DO NOT attempt the following...

1) TV trucks surrounding your home? Have some neighborhood kid float a rumor that the local Radio Shack manager flipped out and is practically giving away duct tape and video connectors. Half the fleet should vanish.

2) Pushing through a gauntlet of heavily logo'd lenses? Start shouting every news slogan you've ever heard. Most photogs will wince at hearing their own, a few will lose their will to shoot and those two cats from the cable outlets will most probably turn on each other.

3) Remember how those hippies would stick daisies in the National Guardsman's gun barrells? Replace those flower petals with crisp Twenties and you Sir or Ma'am have bought your way out of three out of four walks of shame.

4) Sure, you can lower your skull and plow through the crowd of cameras but you'll only seem guiltier on the evening news. My advice? Head up, chest out, knowing chuckle at the ready. Yeah, you'll still make the broadcast - but think how chipper you'll look!

5) If that doesn't work, belt out a showtune or two. The former Sports guys will feel all icky inside, the old drama club techs will secretly swoon and the rest of us will trade enough quizzical looks to give you a chance to get away...

Just don't try to hide. We lenslingers take that as a personal challenge and will risk life and lens to hunt you down ... even if we were never really sure why we were pointing our camera at you in the first place. Now you know.

(Special Thanks to Charleston, West Virginia photog Adrian Mosby for use of his photo)
Posted by Lenslinger at 9:13 PM No comments: 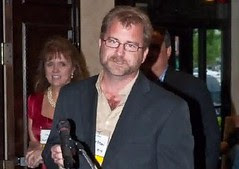 What an honor it was to speak at the Roy Hardee Memorial Press Conference - a not so solemn occasion marking the many adventures of one legendary news man. A special thanks to Roy's son Lee for taking note of something I wrote and allowing me to voice it to the Hardee faithful. No, Toastmasters won't be calling, but I did leave the podium feeling better about the debt I owe my very first News Director. Roy, of course, would have shrugged the whole thing off had more than his spirit been in attendance. As it was, he probably had to bite his tongue as his legion of descendants, proteges and rabid admirers gathered to chat about the man whose very name meant News for no less than fifty years. 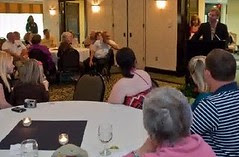 Naturally, it was something of a reunion. A Park Station era Channel Nine crowd showed up en force: There was Lori Scott - the woman who suckered me into minimum wage servitude back in 1989. Farm News elder John Spence brought his memories, baritone and supply of smart-ass remarks. Thomas Cormier and I chuckled over that day we jumped out of a mostly okay airplane. Woody Spencer materialized, told me 'these aren't the droids you're looking for' and vanished. Neal Fox and I toasted to the hard time we served together in Chocowinity. And a still quite fetching Johnna Miller told me how Roy's silent assurances filled her with confidence early in her career...

Explains all those times she kicked MY butt.
Posted by Lenslinger at 7:46 PM No comments:

The Nerve to Swerve 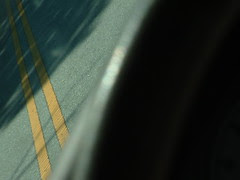 Here's the thing: when the story a news crew has been working on all morning falls apart, said news crew does NOT simply take a longer lunch. After all, there's still a gaping hole in the evening newscast and now a pissed-off producer to boot. If the news crew is lucky or smart, they'll conjure up something quick and pitch it to a desk suddenly under duress. Otherwise, they could be sent on just. about. anything. Leper festival, moratorium orgy, infected puppy follow-up: the scenarios are grisly but who has time to wretch? Not YOU. You've got two minutes of broadcast to patch - not to mention a lactose-intolerant show-stacker who's pretty pissed Ellen is being interrupted by your selfish needs. Sheesh!

So where am I going with all this? In circles, apparently. It's one of my specialties. I can throw a late model hatchback into a controlled 360 quicker than most cops can execute a PIT maneuver. Practice helps. Tell me on the cellie the widow/Congressman doesn't wanna talk anymore and I'll turn this Escort wagon around so fast the logos will glow. Ya see, shit. Falls. Through. Plans so grandiose they could only come from a morning meeting can smash upon impact on the cold, hard shores of reality. There are many reasons. Broken phone tag. Secretarial insulation. That weird habit people have of working during the day. Yes, a million different ripples can capsize your news-craft and cause producers back at the shop to spill that swill in the break room that passes for coffee all over their Glee mouse pads...

But I'm not here to run down producers - or anyone else for that matter! I only want to go home at the end of the day and not cringe should I wander past my story of the day playing in the corner of the living room. That requires focus: a narrow state of mind that must hold steady even when everything falls at apart three hours before showtime. How do I know? It happened to me three times in a row last week, for reasons I've already forgotten. Not that it matters. NOTHING matters when there's gaping stretch of dead air looming in the distance, a dulling abyss of static and shame with your name all over it. So when you see me blowing past on the interstate, take no offense. I'm merely racing for my livelihood - running headlong into a deadline with precious little to appease a most truculent News God....

Reason enough to get her up on two wheels...
Posted by Lenslinger at 7:42 PM 1 comment: 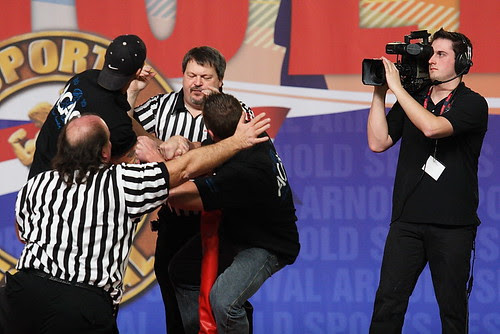 In this little scene sequel to Over the Top, Sly's brother Frank stars as a struggling trucker's half-cousin bent on world forearm domination. All goes well for the monosyllabic Stallone until an especially grisly bone break at an Ohio tournament becomes a YouTube sensation. From their the picture devolves into standard buddy-fare as Frank and the young photog who made his famous embark on a cross-country dump-truck chase. An unbilled Cloris Leachman collects a paycheck in the third act as the Ghost of Ma Barker. (Don't ask.) Unrated. Straight to Cable. Panned for its many musical numbers and slow-motion knuckle explosions. 89 minutes - give or take a dance sequence...

(Photo by David Heasley. Special Thanks to ColumbusCameraOp)
Posted by Lenslinger at 8:33 PM No comments: