If the thought of fawning over grown men in flame-retardant onesies fills you with the same kind of indigestion it does me, know this: some folks eat that stuff up. Take Weaver. He was so stoked to go to racin', he offered to cover the entire Daytona 500 with nothing more than an Etch-A-Sketch and half a box of Twizzlers. Then he stabbed a guy in the throat for suggesting open-wheel racing was a superior form of motorsport. Since none of his fellow photogs would cough up the cash for an intervention, we did what anyone does with a troubled relative: we hit him with a lawn dart dipped in barbecue sauce and shipped his carcass to Florida. Now he's embedded with the rest of the Nascaratti as they search for subtext amid the roundy-rounds. It's a twisted, overly lit world where they dress in logos and use weird terms like 'drafting' 'restrictor plates' and 'Clint Bowyer'. Don't ask me to explain it; I fall asleep after Lap 3. (EARNHARDT!) As for Weaver, we figure after two weeks of hobnobbing with stock car royalty, he'll be ready to drop a few names back here at home. Until then, know that he's content to crank out twenty seven hours of race track analysis a day, provided he's got a clear shot of the straightaway the day the flag finally drops. So don't feel sorry for him, after all...

All Hat, No Prattle 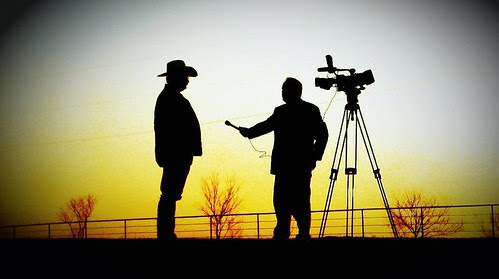 Rarely is an era captured in a single frame. But that's exactly what TV News photog Jake VanDonge managed to do the other night in Clay County, Texas. That he did it with a Droid X is equally astounding, but I didn't log in to yap about apps. No, I'm here for the silhouettes. The one on the left is Sheriff Kenny Lemons, an elected position which more than explains the hat. The guy on the right? Why, that's none other than Paul Harrop: multimedia journalist, ham radio jock and tireless promoter of this very blog. Seriously, besides my Mom (and perhaps Joel Leonard), nobody's turned more people on to Viewfinder BLUES than this broadcast dynamo way down in the Lone Star State.

Too bad he's about to bail.

See, Paul's got more upstairs than your average microphone holder. He's already done time in a couple of newsrooms and for the past two years, he's damn near done it all. Now, he's taking his talents to South Beach Washington, D.C., where he'll be a Producer/Videojournalist for a national General Aviation association. So why would a promising young man leave the exciting industry of TV news? Have you WORKED in the exciting industry of TV news? Obviously not. Otherwise, you'd understand perfectly how someone so adept at broadcasting would eagerly seek a life outside their local affiliate. Besides, Paul's got game:


'I'll trade live trucks for Cessnas and shallow graves for tarmacs. I will miss local news, but I am a storyteller at heart and have aviation in my blood. My father, grandfather and uncle were all pilots. This is a dream job and will hopefully keep me from standing at the side of an icy freeway for endless live shots on it being an icy freeway."

Good luck with that, Paul. Should your General Aviation association develop a need for an overly wordy camera nerd, lemme know and and I'll head straight toward Capital City. Better yet, just tell your new friends about my blog and I promise to keep the hell off the Beltway. But before you shake all that Texas dust from your loafers, know this: you've helped me more than you know and a copy of that righteous photo up there will forever hang in a place of honor here in the uppermost reaches of The Lenslinger Institute.

Or at least until the wife makes me straighten up the playroom.
Posted by Lenslinger at 11:50 PM No comments:

Less Than a Feeling 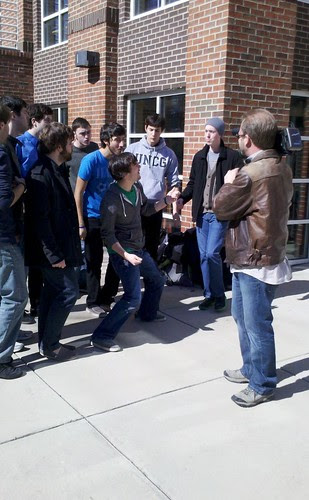 Ever get caught between the glass and good intentions? Ever get suckered into shooting something destined for the dustbin? Ever held a stranger's ego hostage while warning lights flashed in the corner of your mind's eye? Every get roped into recording a college A cappella group's six best minutes as your own lunch break melted in the midday sun? Ever get the funny feeling what you're capturing with your camera will never see the inside of a TV screen? Ever feel bad when, despite your best efforts, said medley gets erased before a single show stacker feigns the least bit of interest? Ever hear Bohemian Rhapsody sung in eleven part harmony by a group of dudes whose only memory of the song comes from their parents' VHS copy of 'Wayne's World'? Ever pin down the exact moment falsetto, show-tunes and free range scatting became the kind of thing a full grown boy would want to be seen taking part in? Every wonder when you got so damn old?

Yeah, me neither.
Posted by Lenslinger at 9:49 PM 2 comments:

With Apologies to Kansas...

I close my eyes, only for a moment, and the timeline's gone...
All my scenes pass before my eyes, a curiosity...
Cuts in the Bin
All they are is cuts in the bin

Same old bug, just a spinning beach-ball in an endless wave...
All we slice crumbles into dust though we refuse to save...
Cuts in the Bin
All we are is cuts in the bin
Oh, ho, ho

Now, don't reboot, nothing lasts forever but the next deadline...
It slips away, and all your tantrums won't another newscast buy...
Cuts in the Bin