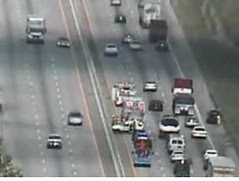 Worry all you want about dicey neighborhoods; the most dangerous thing most TV News photogs do is climb behind the wheel. At least that's the case with James Walter Moore, Jr.  - the forty year old photojournalist for South Carolina television station WSPA. On Monday, Moore was driving north on I-85 when the spare tire from a pickup truck in front of him took flight. Moore swerved to avoid hitting the tire. flipping the station-owned SUV at least once. According to reports, he remains in serious condition at Spartanburg Regional Medical Center. Though the market he works in is barely a state away, I've never met the man. But I have logged thousands of miles in search of news, battling lane-changing madmen at seventy plus. In this case, Moore's fast reflexes most probably saved his life, though it's hard to know any of that when the truck in front of you starts shedding parts. Here's hoping the good Mr. Moore heals quickly and can soon join the rest of his Carolina colleagues on the ludicrous pursuit that is local news. Get well, Jimmy.. The rest of ya, keep your eyes open...

As of an hour and half ago Jimmy was in his second surgery of the day. He may have one more later today. During the accident his V6 vertebrae slipped above his V4 vertebrae, so the spine is the main concern right now. He does not have feeling from the waist down. The surgeries are an attempt to alleviate the swelling on his spine, and that should help him to regain feel again.

His tests have come back favorable to show that he doesn't have any sort of head trauma, but there is a large gash on his head that will need a surgery to fix it.

Jimmy's wife has said that while she knows he is in pain he isn't complaining about it at all, and is talking, laughing, and cracking jokes.

It's obviously going to be a very long recovery for Jimmy. Everyone at the station as well as his family are asking that you keep him and your thoughts and prayers while he pulls through this, and would like to thank everyone from across the country who have called or written asking about him.

Posted by Lenslinger at 9:06 AM No comments:

When a band of violent morons overtook his Clapham Junction Neighborhood, Sky News Reporter Mark Stone could have high-tailed it out of there. Instead, he committed journalism. To be more specific, he fired up his smart phone and began narrating the bedlam that's threatening to level London. Okay, so maybe it won't level London, but when dimwitted marauders began looting shops on Lavender Hill, it probably felt that way. Which is what makes Stone's performance all the more spectacular, for not only does he jam his tiny camera into storefronts as a mob tries to dismantle them, he even challenges a few of the cowardly thugs to explain their rancor. They cannot, but that doesn't stop the Sky News reporter from expressing his own disdain in a way that is exquisitely British. Ya know, if I was in charge of something as useless as the local Emmys, I'd ship a few of those golden statues across the pond to a certain reporter who's more than proved his mettle. Can't say I'd do the same...

Posted by Lenslinger at 11:29 PM No comments: