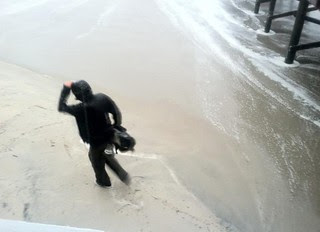 Just because I’m nowhere near the coast this weekend doesn’t mean Hurricane Sandy ain’t on my brain. Twice now I’ve caught myself fondling granola bars in the pantry. When it gets dark, I’m gonna go in the garage and blind-roll my poncho. If that goes okay, I’ll probably drive around for awhile with the radio blasting static. Just when I’m about to rip my eyelids off and stuff them in my ears, I’ll stop by that car wash and find an empty bay. My fancycam’s in pretty good shape now, but once I’m done with a certain turbo-hose setting, it’ll spit and whistle like Katrina herself gave it the clap. When the quarters run out, I’ll lash myself to the windshield, bribe a transient to pelt me with rock salt as I attempt a spoken word performance of the Traveling Wilburys’ first album. I figure I can get through ’Tweeter and the Monkey Man’ before any security weasels show up. That’s when I plan to initiate a low-speed chase across three counties - a meandering pursuit in which I’ll scrub up against every available guardrail while calling into local radio shows with fake flash-flooding updates. Chances are that’ll never get old, but if it does, I’m gonna duck into a laundromat and demand they let me sit around in my underwear back by the dirty clothes heap. I don’t want to hurt anybody, but if I’m gonna wind down from simulated hurricane smotherage, I’ll need to knock back a half dozen PBJ’s and three tall boys of the kind of lukewarm beer you find in abandoned gas stations. By then I’ll be pretty tapped, so look for me to wrap things up by man-hauling my provisions to the closest Port-A-Pottie, where I plan to crawl inside and finally get some shut-eye.

Then I’m gonna get up and do it all over again, until that bookie I know calls my cell phone and berates me for not dumpster surfing LIVE(!) the way some putz on his Netflix stream just did.

Maybe then I'll stop feeling so guilty.
Posted by Lenslinger at 11:19 PM 2 comments:

Sorry for losing focus this week, but a certain someone is about to have a birthday - the first of many he won't be around to celebrate. Dick Carney died on the last day of January and left a gaping hole in the lives of those who loved him. Prominent among that throng are two middle aged men with not a lot in common. My brother Richard and I haven't always seen eye to eye, but if there's one thing we can agree on, it's that the planet was a lot more fun with Dick Carney on it.

Others seem to agree, as total strangers have shared memories of mirth that possess healing powers decades after those hangovers in the making stopped causing temples to throb.

What I would have given to have been around back then. But that's not how life would have it. Divorce and adoption intervened. As a result, I grew up wondering what the first man who married my mother was like. Mom never said; it was easier for everyone that way. Besides, at age sixteen I found out for myself when a strangely familiar figure emerged from that painful haze and introduced himself. Dick Carney.

"Who goes by 'Dick'?" I remember asking myself.

But I was too enamored with the man to ask him myself, a feeling I wasn't totally proud of. Dude left us in the lurch way back when and he hadn't exactly broken any land speed records closing that gap. When he finally did, I had a chest of questions I wanted to hurl his way. But upon meeting him, much of that anger faded away. I can't explain it, really. Coming face to face with the man I'd imagined all those years satisfied a need within me. It wasn't instantaneous or even overnight, but getting to know him really helped me understand myself (a neat trick at age sixteen).

As the years came and went, I learned even more about Dick Carney. Far from a saint, he offered few apologies about leaving and even less explanation about where he'd been. Somehow, that was okay, for I got the feeling he'd been lost himself for many of those years. Now that he was back, I was happy just to source some of my proclivities - from a knack for vernacular to a love of brown liquor. I can't say meeting my biological father solved all of life's problems, but it sure made me stop feeling so damn strange. Suddenly the dunderheads that plagued me all through youth didn't seem so threatening - not when I kind of understood why I felt the way I did.

Not to discount the work of my Mother. She is the reason I am a free man today and every responsible thing I've done in the past forty five years can be directly traced to her love and guidance. But the Old Man (that's what I called him; never "Dad") imparted a few lessons he'd learned from a hard-knock life. He hired me. He fired me. He put me to work selling cars and beamed with pride when I displayed just an iota of the bullshitting abilities he possessed in spades. He did the same for my brother before me.

What he didn't ever do is judge me, even though there were a few times he probably should have. As a result, I fumbled through my twenties knowing no matter what kind of scrape I found myself in, I had a crusty old goat on speed dial who'd done (and undone) it thirty years before. As time passed and I grew a little wiser, I no longer depended on him for a quick bag of lime or a half-cocked alibi. Instead, I sought Dick's counsel on more grown up affairs, from how to best clean vinyl siding to how better express myself on this silly site. Oh, how he loved this blog. Quite the writer himself, he knew instinctively what I was trying to do here and was the first to congratulate me when I occasionally pulled it off.

I wish I had a tidier ending, but that's not how life works. Looking back, I now realize I enjoyed his company for damn near thirty years. That sounds a lot longer than it felt, but the time we did have together was extrapolated by the fact we got along so well. The Old Goat, as he came to be known, understood his sons and he let us both know it. He may have stumbled out of the gate, but by simply being himself, Dick Carney became the best father two grown men could have. If they don't sell Hallmark cards for that kind of thing, they probably should. Now, if you'll excuse me, I have to come up with something TV-related to write about.

Else the Old Man will give me grief when I see him again someday.
Posted by Lenslinger at 10:53 PM 4 comments: