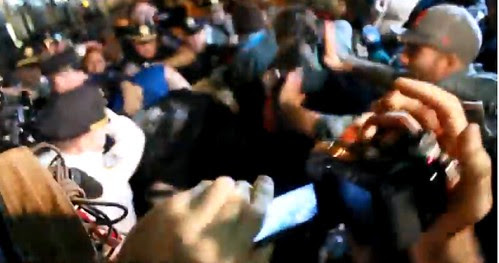 I'd like to think the Occupy Wall Street crowd understands their issue better than yours truly, but I've covered enough protests to know most folks screaming catchphrases are clueless reprobates with nothing much better to do. You there - dressed like a shepherd and reeking of ditch-water. Wanna change the world? Leave the street. Wash that ass. Get a job. Maybe then I'll be the least bit interested in what you have to say (though chances are if you're holding a homemade sign and wearing anything made of hemp, I'm gonna consider you still mad at your parents and officially not worth my time.) But hey, I didn't log in to lose readers with my half-addled pragmatism. There's tons of blogs featuring that weak cheese. Besides, politics cease to matter when the night sticks take flight. Just ask Rodney King.

Or better yet, ask FOX 5 photog Roy Isen and reporter Dick Brennan. They were among the news crews caught in an explosion of violence between New York Police officers and the great unwashed. No matter your theology, it's a scary scene. Protestors pushing forth, cops swatting back with batons and pepper spray; if nothing else the footage proves you don't cover a riot, you swim in one. Of course the Occupy Wall Street movement famously started via social media and some would say the mainstream media is only getting what they deserved for being late to the world's most unpleasant party. Meh. I'm just glad that particular fracas is happening far from here, for as painful as it would be to catch a nightstick to the head, it would be even more excruciating to do so in a crowd full of people who still aren't sure what in the hell they're fighting for. 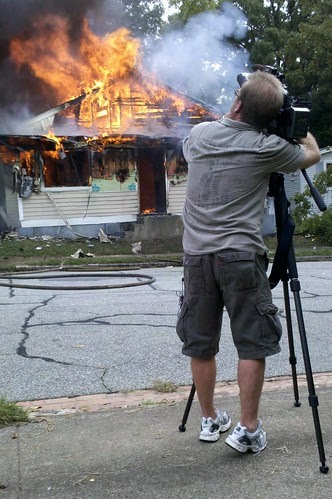 Even though I'm not the spot news specialist I once was, I can still roll up hard on a house fire. Especially when it's one of those abandoned homes lovingly set ablaze by men in turn-out gear. That's right, I stumbled across a training fire last week and treated it like it was news. To be fair, I knew it was a 'control-burn' - as the traffic cones between me and the fire trucks were arranged way too precisely. Still, I forged ahead, knowing that somewhere among that burning rubble were a few sharp edges I could hang a story on. As it turned out, UNC-Greensboro donated the old home to the city's fire department, who,  not surprisingly, doused the thing in gasoline and called all their buddies. By the time I noticed the smoke plume, they were well on their way to choking every squirrel within a fifty tree radius.

But it didn't stop me, for I've been taken with blaze containment since the Reagan Administration. Back then I was the bookish younger brother of a future firefighter. Richard Pittman grew up to fulfill his action hero leanings. Me, I just dug the view. So I became a TV news photog and in twenty years I've attended countless conflagrations. Most were tinged with tragedy, of course. That's why training fires are so much fun: you get the thrill of the hunt without trampling over some poor woman in a housecoat. Why, I've even known training fires like to this to change young photogs lives! There was this one guy I knew who covered a controlled burn so thoroughly, he left the scene wanting to be a firefighter himself. Look! There he is now!

Tim Bateson, in the flesh. I suppose I should have expected him to be here, but when he popped out from behind a fire engine with camera in hand, I was more than a little surprised. And pleased. Tim spent many years at El Ocho, proving himself a committed lenslinger and all around great guy (even if he IS Canadian). When he announced he day he was leaving tee-vee to answer a higher calling we asked him when his garbage route started. Turns out he had something even more noble in mind. These days, he's one of them, though his photog past hasn't left him, as evidenced by the way he kept getting in my shot with that damn camcorder. That's okay. I'll wait til he picks his nose one day, then share the dig with the Greater Piedmont Googolplex. That'll teach him to get all heroic on us.

Now if only he'd teach me to arrange traffic cones like that...
Posted by Lenslinger at 6:35 AM 2 comments:

Where No Handelman Has Gone Before 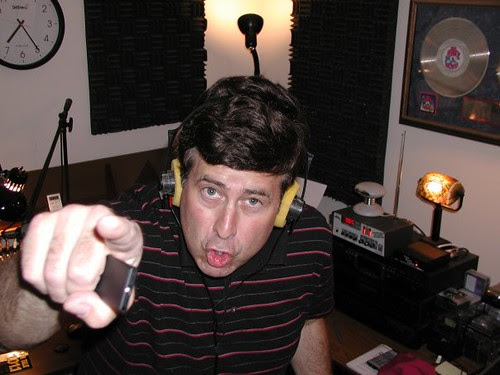 "Did somebody bail?" That's what I wondered when journeyman radio host Allan Handelman called the other day and asked if I'd appear on his show that afternoon. "Youbetcha!", I heard myself say. Then I hung up the phone and realized I still had ninety seconds of newscast to fill before I could even think about what I was gonna talk about on the ray-diddio. Two hours later, I fed my final cut to the server down the hall then headed to the break room. On a whim I bought a Dr. Pepper, gunned half of it down like a frat house beer, then escorted the rest of my beverage to an undisclosed location. There I hunkered over an antiquated land-line, scratched notes on a four year old phone book and tried not to belch on the air...

...And judged by those harsh standards, my appearance on The Allan Handelman Show was a raging success. Allan seemed rather desperate happy to let me babble about local television in this new media age, a subject I can ponder endlessly without ever even attempting to provide any real answers. Hopefully no one drove off the interstate when they realized the homeless pet psychic scheduled to be on at six had been replaced by some guy they'd never heard of before holding forth on a medium they no longer watch. Hey, everyone needs a niche. Besides, Handelman fans (like me) know to expect just about anything on WZTK's afternoon drive-home show, from alien abduction experts to that time Sasquatch called in to talk weed legalization. Me, I'm just happy to help, though I got a little nervous when I realized 'Phil from Myrtle Beach' was indeed old friend Phil Werz, calling in to lob a few broadcaster softballs. Thanks, Phil and Thank You, Allan, for nothing pleases this gasbag more than pretending someone out there is paying attention.

Now about that syndicated show...
Posted by Lenslinger at 3:57 PM No comments: