I've been working the early morning shift lately and there's a certain proclivity I noticed among all my colleagues... 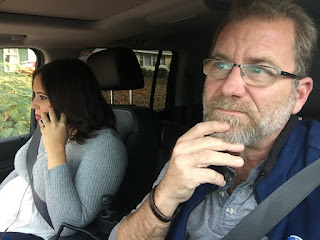 Morning show people talk about their afternoon naps the way fitness buffs brag about going to the gym:

"I tripped over an ottoman during Judge Judy and laid there for three hours. Totally crushed it!"

"Not me, I plan my naps with military precision. Twelve thirty to four is MY time. The wife gets mad when I take the batteries out of the smoke detectors. She just doesn't understand me..."

"Yeah, well after lunch I was scraping bird crap off my driveway and just lost consciousness. Woke up in the upside down with the kids from Stranger Things circling me on bicycles. At least I think that's what happened..."

Truth is, it takes years of training and sacrifice to master the Midday Face Mash.  Whether you're changing light bulbs, lying face down in the bathtub or on the Skype machine with Aunt Hilda, when the point of collapse approaches, you HAVE to stick the landing. Of course, perfect execution of this age old feat requires silence between the synapses, a looping stupor that other folks have to linger on sketchy street corners to score.  Do it right and you can damn near time travel. Or at least feel like it when you come to hours later with two dimes and a Cheeto stuck to your face.

Now if you'll excuse me, I have to wrap myself in blackout curtains and crawl into the attic.
Posted by Lenslinger at 12:21 PM 111 comments:


A deep dip of the lens to UK cameraman Christian Parkinson for having me on his Image Junkies Podcast. Christian's a tour de force on his own side of the pond and no stranger to life behind the lens. As for our chat, I was sleep-deprived at the time yet happy to be asked to blather. Recent events have left me with that burning urge to write again and I'll take this interview as the kick in the ass I need to get started. Give it a listen if you will, and know that I don't sound quite as Southern inside my own head. Thanks again, Christian. Next time, I promise to know exactly what kind of camera I use. What do you expect from an absent-minded word nerd?
Posted by Lenslinger at 9:30 PM 7 comments: