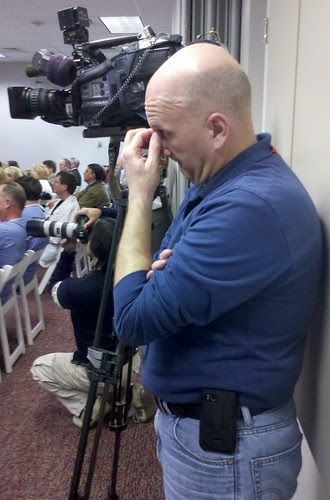 Things they don't tell you at The Photog Academy: You're gonna grow old staring at a podium. In fact, you'll gather most of your news standing still. But you won't have time to daydream. No, you're gonna learn to spot a CEO at a thousand paces, sidle up to his lackeys without really speaking and secure a one on one interview with the boss they hate. First though you're gonna wait. You're gonna lean against a back wall and fantasize about trap doors, sprinkler systems and giant hooks. You're gonna edit in your head while some guy in a thousand dollar suit reads off a napkin. You're gonna rock back forth in your sensible shoes until you're up to your fanny pack in' off the cuff' remarks. You're gonna learn to field strip a press kit down to the bare essentials, then go back to eyeballing the refreshment table. You're gonna curse the corporate hack running the audio bord, plug in anyway and record sound you know will never make air. You're gonna scan the room for big wigs you know, zoom in on a pair of hands and hold your fire until they start clapping. At one point, you're even gonna look over at the competition, lock eyes as if your both prisoners of war and quietly pray for an asteroid to hit the building. These are just some of the things they don't tell you about at The Photog Academy.

Next time, the TRUTH behind noon live shots. (HINT: It's all about The Price is Right.)
Posted by Lenslinger at 7:47 AM No comments: 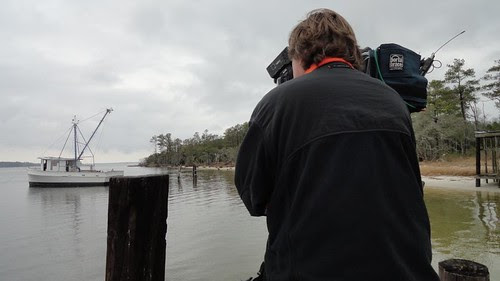 Thanks to the camera-shaped growth on my shoulder, I spent my twenties inthethickofit. Crumpled cockpits, brazen blazes, inelegant weather - nothing short of a restraining order would keep me from savoring the latest imbroglio. But after years of gorging myself on handcuffs and house fires, I lost my taste for top stories. So too do most photogs foolish enough to mistake A/V geekery for a career. Hey, CSI: Schenectady may make every murder look like a garden party, but your average homicide scene is a stone cold drag - and not just for the stiff under the sheet. Callous? Youbetcha. That's what happens when you spend ten years staring at politicians and body bags. Next thing you know you're the crab-ass at the crime tape, bitching to all who will listen how the Medical Examiner in your old market would have been here by now. If that guy sounds a lot like you, do us all a favor:

That's what Richard Adkins is doing... I think. Truth is, I don't know where exactly dude is, though judging from the above photo, I'd say he's due east of the Lenslinger Institute. And while I have no idea what he's focusing on down by the shore, I damn well know what he's looking for: Respite, relevance and perhaps a cool reflection shot. Throw in a boat ride and you have the makings of a most satisfying sortie. Will it make the first few minutes of the very next newscast? Will they pay me more if it does? No? Then ease up on the inquisition, would ya? My man's trying to steady his shot. How else if he gonna tell the story he's formulating in his head?  Chances are he's got the thing half-edited in his frontal lobe. See, long before he hunches over a tree stump with his laptop and little yellow lunch box, he's got a good grip on the narrative taking shape in his cerebellum. And I'm pretty sure it doesn't call for some failed thespian in a trench coat doing his best Robert Stack.

Not that there's anything wrong with that.

But for the true cameramanthropologist, propping up spokes-models and turning interns into auteurs is a surefire recipe for brain rot. Lead stories may get all the cool graphics, but they're painfully pedestrian to produce. I myself can pound out a pretty gripping update on the latest drive-by shooting without breaking a sweat - provided the sheriff begins his briefing on time. And that wall of flame I erected in an instant? Strictly point and shoot, chief. It takes a lot more skill to find your kill, be it a one of a kind character in some backwater town or some human cartoon no one ever peruses. Consider it the Church of Kuralt - a denomination we Carolinians are especially fond of. And while our man Adkins would never compare himself to Father Charles, he squats at the very same altar, knowing that if redemption can't be found in those counties less covered, chances are a languid lunch is in the offing.

Can't get that at the crime scene.
Posted by Lenslinger at 10:10 PM 2 comments: 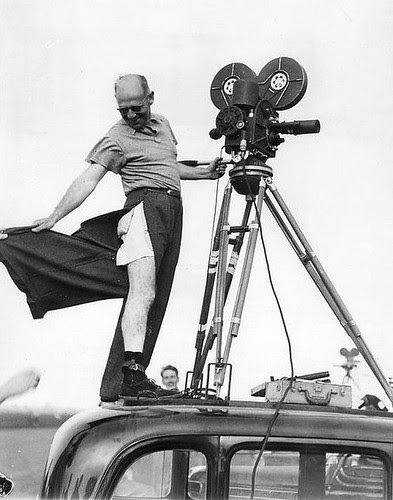 He had the eyes of a fighter pilot and the legs of a dancer. At least that's how Sam the Cameraman saw it back in 1936. Trouble was, not everyone was ready for a newsreel man so prone to pirouetting. So Sam tried to lay low, which was a tough gig for a jet-setting fellow like him. Once, while perched on a car roof covering the National Air Races, a passing beat got the better of him and the dancer in Sam came out. Years later, an investigative committee would point to a visiting pep band for sparking the melee that followed. But Sam must shoulder some of the blame, for it was he who tore his eye away from the action, removed much of his restrictive britches and attempted to introduce a Depression-era crowd to the concept of 'Jazz Hands'. Tragically, a group of Merchant Marines was also in attendance that day and, after watching the oddball photographer break several social mores at once, pulled Sam off that sedan and beat him senseless. Sam survived that brutal attack, and while he continued to schlep glass across much of the Twentieth Century, he never so much as broke out another Foxtrot... Hmmm? That's NOT how the whole thing went down?

Oh well. Leave it to Amanda Emily to let 'the facts' get in the way of a good story.
Posted by Lenslinger at 9:54 PM 2 comments: 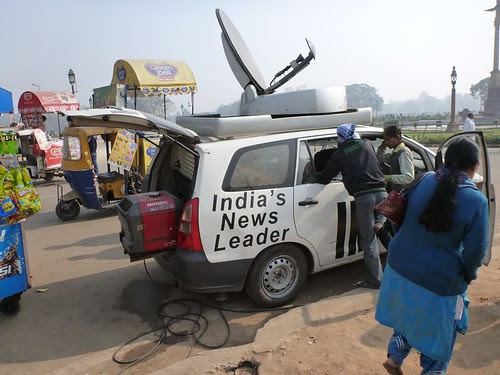 And now for a look at technology, we go LIVE(!) to Mumbai, where a crack squad of broadcasters is demonstrating the latest in third-world news-herding... It's a sat truck! It's a billboard! It's a dusty micro-van cloaked in logos and motor oil. Whatever you call it, remind me not to whine so much the next time someone leaves Slushee guts in the center console of Live 4, would ya? At least that thing's been inspected since the last century. Speaking of the last century, a reporter lady from India's News Leader was gonna speak but she was overcome by generator fumes and had to go lie down.  That's a shame too since she had some hard-hitting facts about Tim Tebow and the wonderful things he's done for the people of New Delhi. Oh well, let's meet her crew. Say, are those viewers leaning into that passenger side window - or is someone trying to trade that hoopty for two sand-bags and an ox-cart? Hey, I'd pull the exact same stunt if my mobile newsroom had the life expectancy of a Ford Pinto on an grease-covered overpass. As far as I'm concerned, you have every right to upgrade your conveyance - no matter what hemisphere you call home. Just take my advice and burn those clothes while you're at it. After all...

...it ain't just credibility that thing's oozin'.
Posted by Lenslinger at 8:41 PM 3 comments: