View to a Skill 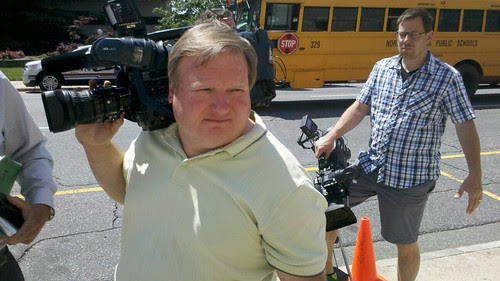 The jury for the John Edwards trial has yet to even be seated and I AM OVER IT! The waiting, the walk-downs, the existential angst of choosing where to wolf down lunch ... quite frankly, I could do without it. But even an alleged loner like myself recognizes the benefits of all this pack journalism: forced socialization. See, with cameras of any kind banned in federal court, we photogs have nothing much to do all day but trade lies, snap towels and constantly eyeball that courthouse door. It can make for a long day, but those very same hours would come to a standstill were it not for the calloused community of cameramen (and women). Yeah, we're a little sweaty around the edges and few of us are burdened with any real fashion sense, but I wouldn't trade this rugged class of individuals for all the hipsters on Elm Street.

Why? They're pragmatic, blunt and perhaps a little tortured. But unlike the skinny jean crowd, TV News photographers base their assertions on reality - not some ingrained disdain for the Hoi polloi. Me - most of what I know about life was learned under heavy deadline. That makes me an expert on absolutely nothing, but at least my opinions weren't formed by some scribbled mantra I read on a  coffee shop bulletin board. No, my worldview first flickered to life on a tiny black and white screen at the shallow end of an eyepiece. For years it held me mesmerized, until I became a parent and realized some things could only be figured out at the business end of a dirty diaper. But enough about me, let's meet the players!

You ever meet someone who could walk backwards over a stack of mattresses and never get the shakes? Who could string together a minute and a half of coherent television in the time it takes most folks to find the remote? Who could stroll into a crowded ballroom dressed like a stoned pool cleaner and feel pretty damn good about themselves? Who keeps the region's movers and shakers on speed dial but is most proud of his ability to burp all the words to 'Freebird'? I know tons of guys like that and a few ladies too. Together they make up the most tolerable tier of the chattering class. Sure, anchors drive nicer cars and producers' socks match more often, but if I wake up one day and see a bunch of monkeys on horseback coming at me with a giant net, I'm high-tailing it to the nearest photog lounge, where I and a bunch of new buddies will figure out how to go cinematic on their ass.

Now if you'll excuse me, Edwards just walked into the courthouse and I gotta get some sleep. Knock on my live truck at your own peril.
Posted by Lenslinger at 11:10 PM 2 comments: 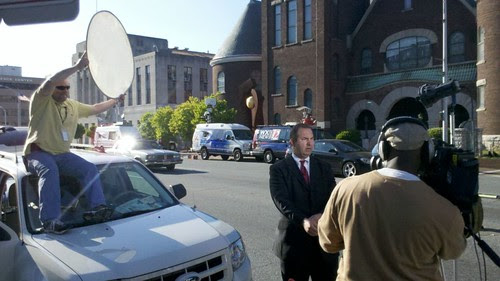 ATTENTION ALL! Swing by John Edwards' criminal trial and we may very well put you to work. Mostly, we need you to loiter out front, then pounce on the former presidential candidate every time he strolls into or out of justice. There's no real skill involved so you should do just fine, but remember: we do other stuff too. In fact, your duties may include:


Convincing a steady succession of meter maids that you're simply not qualified to move that live truck away from those fire hydrants, even if its logos do match the one on your less than heaving bosom.

Pretending the very alignment of our solar system depends on you getting a fresh fourteen second sequence of Edwards walking to and from the courthouse. (You know, in case he suddenly confesses or breaks into song.)

Bouncing the day's last rays off a co-worker's bald spot, all while trying not to cave in the roof of your - ahem - mobile newsroom. Sunscreen not included.

Pulling eight hundred feet of live truck cable from beneath the tires of a minivan your competition convinced a soccer mom to abandon.  (They must have promised her a coffee mug or something.)

Falsely assuring your reporter that the live shot in which she unwisely referred to John Edwards as 'Richie Rich with a stiffie" might not be her last.

Informing curious pedestrians as to why there's two dozen satellite trucks double-parked along Market Street. (Try to work in the supernatural.)

Extracting network crews from favorite booth at nearby eatery with claims that 'Rielle Hunter just rolled up in a tube top slathered in Go-Daddy logos.' (Hey, it could happen.)

Pining for the good ole days of simple videotape as you and three other photogs hold a seance over a freshly-filled SD card someone thought to soak in Dr. Pepper.

Trying to convince that courtroom sketch artist that A) you ARE part of the station group paying for her chalk masterpieces and B) she should probably let you hold onto her debit card just to make it all legal-like.

Fighting the urge to hand your reporter a notepad (or napkin) as she repeatedly interrupts your nap by screaming at the antiquated laptop that - surprise - won't let her log on.

Other than that, it's all point and shoot.
Posted by Lenslinger at 10:18 PM No comments:

The Man Who Fell to Earth 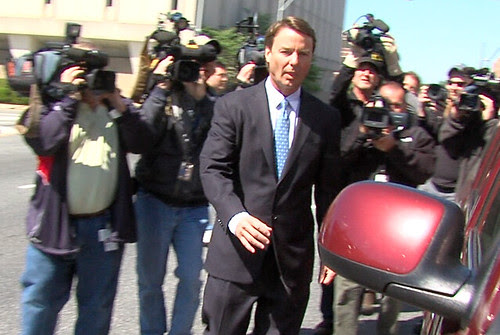 If harassing a super-villain is on your bucket list, grab a press-pass and get thee to Greensboro. That's where you'll find white hot pariah John Edwards, a man whose million dollar grin is conspicuously missing now that his trial for campaign fund violations has finally begun. I was outside the federal courthouse when jury selection kicked off and I can tell you many of the lenslingers behind our golden boy up there feel like they're the ones on trial. You would too, if you were facing six weeks of long commutes, meter maid negotiation and the strangely unsatisfying sensation of televising a federal trial. See, the big boys allow no cameras inside their courtroom, turning the sidewalks outside into a loose confederation of lenses that hardens into a knot every time Johnny sashays to or from his date with justice. If the possible witness list is any indication, it's gonna be a regrettable, skank-filled affair.

But who am I to judge? If the man who came thisclose to the Presidency wants to keep denying he fell into bed with a flake at the height of his campaign, then monkeyed with the funds to cover up  love child, well, that's his decision to ignore some very expensive legal advice. Throw in a dying wife and you got more than enough reasons to consider this ambitious attorney the lowest of his seedy breed. Me, I'm just a cameraman - one who's backpedaled before this asshole when he was sporting thousand dollar haircuts while spouting off about two Americas. Back then, any news crew that traveled to his hometown of Robbins found only one America and it was filled with folks who had nothing but bile to spew when you asked about 'John Edwards'. "How bad could he be?" I used to wonder.

But I'm not here to vilify this feathery worm (not much, anyway). I'm here to shoot him! Now, before you call security, know the cross-hairs in question are attached to my camera. The only ill will I wish upon John is the Trump-like disintegration of his celebrated hairline. Screw with that 'do and he might very well implode, for one gets the feeling his day begins and ends with more than a little mirror time. Which begs the question: Does Edwards realize his boyish good looks and fat wallet might not keep him out of the Pokey? For as long as I can remember covering him, he's waltzed from limo to photo op to hidden floozie's chambers with that same arrogant air. Sure, his trademark grim is gone, but I can't help but get the feeling that this dandy still believes he can charm his way out of this white hot mess of his own creation...

What do you expect from a dude who sleeps with a, (GULP) videographer?
Posted by Lenslinger at 6:13 AM No comments: