Not since Chris Elliot embodied the camera-schlub archetype in Groundhog Day, has such a smooth operator assumed the role of Photog. That's right - Terence Howard picks up the heavy glass in The Hunting Party - a new film about a far-flung news crew chasing down a dangerous exclusive. Will THIS be the film that nails the nuances of TV News? Not likely - the trailer plays more like 'Lethal Weapon In Bosnia'. Will the dude who oozed street cred in Hustle and Flow master the act of camera management as well? Maybe, but it won't stop a nation of b-rollers from picking apart his posture, rig and cursing ability. Will Disposable Photog Syndrome incur - in which the aforemention cameraman character vanishes quicker than an anonymous Ensign on a Star Trek landing party? Nope, judging from the trailer, Terence and his character get plenty of screentime. They may even be the narrator. But will this buddy-pic buck the trend of so many flickering efforts before it? Will it plunder the form of only cliches, or properly portray the strain of forcing life through a tube? Will it forever raise the lowly profile of the broadcast packmule - or pop up on Bravo in six weeks, where it will skewer the discipline and suck unabated?

Well, there is the matter of Richard Gere...
Posted by Lenslinger at 7:01 PM 2 comments:

Ever since I found out a couple of bald freakin' eagles nest near my home, I've been hounding their press agents for an exclusive interview. No call-backs yet, but from the look of the vindictive shitstains covering Unit 4, the big birds know I'm onto them. That's why I hooked up with Melissa Whitmire, lenslinging member of the ornithological paparazzi. Who better to lead me to the water's edge than Melissa - whose sighting scope and quite nature make her a trusted guide into the brush. Like a sniper, she pointed to the treeline three hundred yards away and spoke of a particular oak. I meanwhile picked spiderwebs out of my teeth and nodded as if I saw it. Not that it mattered; those haughty birds of prey were out carousing. Only when they tended their nest in winter months were they reliably sightable.

Today I'd have to settle for some hot Heron on Heron action; that and a gander at Melissa's considerable portfolio. In the end, I didn't let the lack of air power stop me from making slot. Not when two 'rescue eagles' sat in captivity forty five minutes down the interstate. (By the way, may I recommend Dan Nicholas Park outside Salisbury as a great place to have a picnic, rent a paddle boat or shoot a foster kid profile?) I only wish the God of Microphones hadn't garbled my interview with one David Jones - a most helpful park employee who hopefully remembered how to spell Lenslinger-Dot-Com. That way, maybe he won't think I was just some weirdo with a fancycam, for the knowledge he dropped really enriched my finished report. As for the national symbol nesting near my neghborhood, I'll see you in January, baldy...
Posted by Lenslinger at 5:29 PM No comments: 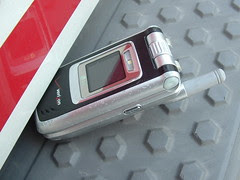 By the time the dog and pony show ended, my station cell phone flashed '3 Missed Calls'. I answered two of them on the walk back to the car, juggling my camera, sticks and light like a TV stevedore. Back at the truck, I dumped my tools on the back bumper, popped open the back window and rooted through the guts of my truck for a decent Sharpie. Not finding one, I settled for a broken pencil, using the chewed-on implement to scratch two words on my shoot-disc's label: 'Mayor's Presser'. Water torture's more like it, I thought - stashing the rest of my gear into Unit 4's back catacombs. That's when a passerby stopped to ask why all the TV trucks were parked outside City Hall. 'The Mayor had a bowel movement', I cracked as I climbed behind the wheel. The man just wrinkled his nose and chased his briefcase down the street.

Ten minutes later, I almost had a movement of my own. It happened near the beginning of 'Rag and Bones', one of my favorite tracks from The White Stripes' new aural manifesto, Icky Thump. Man, I've been trying to melt that whole disc ever since I bought it - playing it over and over again in my news unit's cockpit while I engaged in the fiercest of white boy steering wheel drum solos. It was during one of these spontaneous displays of rhythm-deficit that my right hand lightly brushed the cell phone holster hanging off my lap. Something about the concave contour of that molded plastic caused a frayed synapse to fire deep within my head and a millisecond later I screamed liek the mother from those Home Aloen movies. Reaching down to the floorboard with my oen free hand, I felt around for what I was quite positive was already a lump of smoking circuitry on the Interstate.

I killed the Stripes, for I was no longer in the mood to have my face rocked. Instead, I hung my head and entered an intense period of immediate mourning. That phone was my life. Attached to my side every waking moment, the damn thing rings four hundred times a day - mostly whenever my camera is rolling. Inside its expansive brain lived an ever growing list of digits - one-touch combinations to friends, contacts and the occasional bookie. A cornucopia of goofy photos filled its gleaming gallery. How I'd live without I didn't know, let alone what I'd tell the boss. See, I'd misplaced a phone before, lost in battle while covering a blizzard on the wrong side of High Point. When I first noticed that phone was gone, I reached into my live truck and dialed its phone number. The wino who answered refused to bring back the shiny new phone he'd found, but he did offer to exchange it for a bottle of Mad Dog and two packs of Kools. I had neither and after a few choice words, severed the line - never to hear from my inebriated friend again.

I vowed that day never to lose another phone. To do so was just so ... bush league. After all, I keep track of far pricier equipment than a lousy flip-phone every day. Surely I could hold onto something as vital, as humdrum, as ubiquitous as my little electronic leash. Besides, I loved my new phone. It had a juke-box's worth of ring-tones, took fuzzy pictures and jittery videos, even reminded me every time my voice mail in-box exceeds three dozen unheard messages. Compared to my very first company phone - two cans and a string in a leather pouch, my current station-owned cell phone was the stuff of science fiction. And now I'd lost this wondrous doohickey because of a smart-ass remark and an undiagnosed attention deficit disorder. Pulling into the El Ocho's parking lot, I steeled myself for the Chief's reaction. How I would convince him of my fervent dedication to equipment retention, I did not know - but as I closed the door on Unit 4, I was newly resolved to try. That's when I noticed the damn thing wedged between the bumper and the hatchback lid. 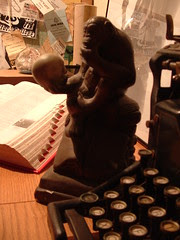 Relax, I'm still a l-o-n-g way from being published. That would require foresight, perseverance and One Mother of a Rewrite. Oof ... Can I get a lil help? You know - poke through the screeds, rants and missives that have held me captive for nearly three years and pick which ones go into my still unplanned anthology? Tell you what, I'll even cut you in on the seventeen dollars and six cents I'm told to expect from this lofty project. And I've made it so easy! See, a recent bout of late night insomnia led first to a unfortunate sack of Cheezie Poofs, then to a frenzied whittling of my nearly nine hundred posts. When the sun broke over my upper lair, my head was on the keyboard, my gritty fingertips holding a visceral list of epistles. Rubbing Poof Dust into my eye, I scanned the hazy orange document and deemed it The Very Best of Viewfinder BLUES.

It's a silly, bitter, suspect read - but still one in need of rectification. If that kind of thing is your kink, have at it. I study it about it every other fortnight and still can't get past the damn Table of Contents. But that's just me. You're different. You can see through the bluster and the adjective abuse and savor the pith within. Call the kids, they'll help. Who needs Scrabble when my thwarted memoirs can be your family's favorite board game, I ask you? You'll all thank me later anyway, when I'm glossing over your contributions to the foreign press. Okay maybe not then, but sometime shortly after that - before the expense checks come back. But I digress. All I'm looking for now is a kick in the pants, otherwise this manifesto won't ever get outta the gate. So, how do ya like your Lenslinger? Pensive? Grizzled? Gassy? Man are you in luck! C'mon -- lemme have it. How else am I gonna mention your name on Oprah?
Posted by Lenslinger at 2:18 PM 5 comments: