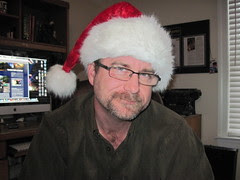 You there - with the mouse in your hand and glazed look in your eye - THANKS! By simply clicking on this site, you've made a delusional father of two just a little bit happier. Why that is exactly, I can't really say - but knowing there are humans out there who willingly give my drivel a spin warms the cockles of my cold photog heart. Look at it this way: until I get my shit together and turn Viewfinder BLUES into a book (projected completion date: Spring, 2027), you have an exclusive inside look into the mind of a guy the rest of the planet hasn't even heard of. Okay, so that was a lousy sales pitch, but that's wholly appropriate since I'm not trying to sell you anything. Yet. All I'm really trying to say is THANK YOU. Your sporadic patronage almost makes me think there's hope for an undereducated schlub with a writing compulsion. Whether or not this blog ever turns into anything more doesn't entirely matter. I could stop writing right now (honest!) and still have exceeded my literary expectations. Lower your standards and the world's your oyster. Now if you'll excuse me I have a host of other goals to fall short of. This kind of mediocrity doesn't happen by itself, ya know.

Oh - there is one more thing: If you really want to do me a solid (or even if you don't), do yourself a favor and pick up this guy's new book. Brian Clarey's a friend of the blog, his writing is warm and funny and he's a righteous dude to boot. Tell him Lenslinger sent ya. Just don't expect a discount. Fella's gotta eat, dontchaknow... Now go have yourself a Happy Holiday. You deserve it.
Posted by Lenslinger at 3:49 PM 4 comments: 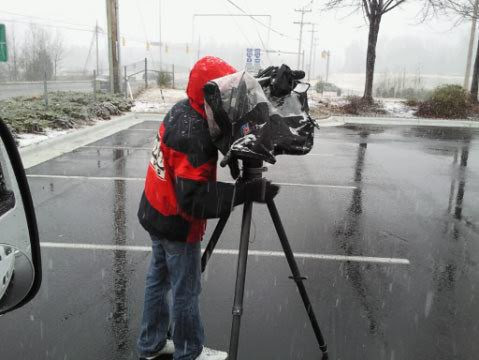 Ya know, as I sit here: warm, dry, perhaps a little stir crazy, I can't help but think of all those lenslingers out there less lucky than I. Photogs like El Ocho's own Stephen Clapper - seen here assembling what can only be an earth-shattering report on our seasonal precipitation. No doubt about it, dude's a PRO, a highly-seasoned 'slinger who's not only working Christmas because he'd dedicated to keeping the public informed, but because he couldn't get the holiday off. That's moxie - the very kind that enables old farts like myself to sit home and avoid talking to our families. Sooo, here's to you Clapper (and all the other half-blue news shooters out there): your youthful exuberance and endless energy are just the kind of qualities I'll gladly toast - just as soon as I pour my next tumbler of Maker's Mark.

After all, it's the least I can do.
Posted by Lenslinger at 11:01 PM No comments: 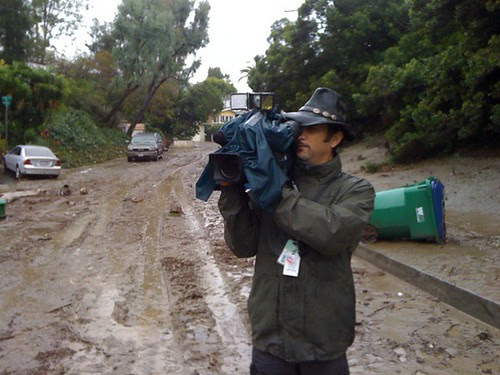 What DOES one wear to a mudslide? I never really know. But that doesn't seem to be the case for Jose Hernandez Jr., a freelance photojournalist for NBC LA. Recently, he was spotted rockin' a bonnet straight from Down Under as he picked his way through a Laguna Beach neighborhood. It's a look that says, "I can document destruction all day long and still look like a complete bad-ass!". Touché, Jose, touché... I only wish I could pull of such a look. Every time I try, I look like Crocodile Dundee on a three-day bender. Perhaps a beret....

(Photo by Toni Guinyard)
Posted by Lenslinger at 10:07 PM No comments:

...and by that I mean email, tweets and Facebook messages. The latest comes from friend of the show Guy "Crash" Ayers, who touches upon a fundamental:

"Why do the stations send a reporter & camera crew to remote locations to do a shoot where nothing is happening? I saw one recently, it was 630am, the reporter was talking about some misfortune that had happened to a little kid, from the kid's elementary school. No kids/teachers/anybody around, it's dark and very cold. What numb-skulls send you out to do that? It hardly seems worth the time for a remote on something like that.

"Well, Crash (if that is your real name), you're obviously not a very sophisticated TV News viewer. If you were, you'd know that seemingly meaningless live shot actually added immediacy, heft and intrinsic street cred to your local affiliate's continuous team smotherage. At least that's what those well-dressed strangers told us back in the 80's. Since then, the notion that unrehearsed remotes lend credence to important stories has morphed into the same old song and dance. Stations beefed up their fleet and now they move them around the region like so many overly logo'd chess pieces. "Live for the sake of Live", the field rats say as we unwind the same spool of cable we've unwound a thousand times before. Which leads us to a most unworthy term.

DOG LICK LIVE SHOT: A live shot performed at a place and/or time that is fundamentally irrelevant to the story. Spawned by consultants, done by rote. Named for the old joke "Why does a dog lick himself? Because he can." 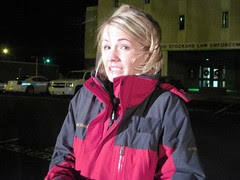 That's right, Crash, you fell upon a 'Dog-Lick Live'. You might want to wash your hands. But while you do, know that those of us under the shadow of the mast are (mostly) at peace with our roadside fate. Sure, we may whine a little when we're ordered to babysit a four day old pothole, but anyone who bitches for more than a minute is wasting everybody's time. You might as well stop by the vending machines and yell at the Moon-Pies for being more than six months old. Lately, I MYSELF have been spotted working the mobile newsroom. Why, just the other evening the tough yet lovely Katie Nordeen and I camped outside the Alamance County Sheriff's Department, miles away from the scene of the crime we'd spent the day digesting. The particulars were grim, the shift was long and the weather so frigid, I wiped away my eyelashes. As for Katie, she held up well - though you know it's cold when the Minnesota girl is shivering. Luckily, we could warm ourselves us with the knowledge we were doing important work.

Just ask the consultants.
Posted by Lenslinger at 11:26 AM 2 comments:

Is there a Photog in the house? 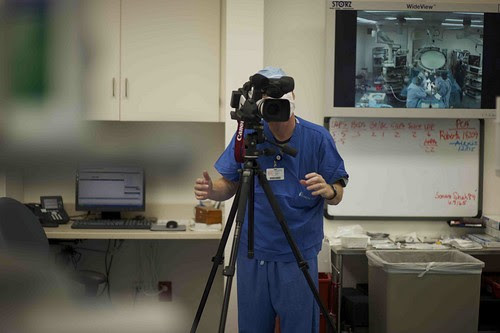 Could it be? "Satellite Dan" - reconfigured as a top flight surgery nerd? We had the technology. But since I'm prevented by microchip implant from divulging just what operating rooms my old pal might be stickin' a lens in, I'll just say this: Dude's in South Carolina, working for fancy-schmancy hospital and living on a boat. Could I make that up? Okay, yeah, I probably could, but the fact remains that five months after the grizzled vet left El Ocho, he still tops the very short list of ex-employees we actually miss. Ya know, every so often a phone rings in the feed room and a voice very much like Danny tells us all how much he loves us. I'd almost swear it was actually him, but dude sounds so ... content. We pass the phone around nonetheless, but no one's thoroughly convinced the man we knew as a video ninja is now dressed like a smurf and radiating inner peace. Still, this recently leaked photo sure makes it look that way, though until I see an unobstructed head shot, I'm just not prepared to believe Danny made that quantum leap.

Next, you'll expect me to believe there's life after TV News.
Posted by Lenslinger at 10:30 PM 1 comment: