Check out the fellas. Have you ever seen a modder squad of hepcat photogs than this leisure suit set from mid-Seventies Scranton? I think not. Truly, I like EVERY-thing about this photo, from the retro film cameras to the garishly-striped News Pinto to the cocky look on that little Mr. Magoo dude second from the left. But this is just one shot from a treasure trove of dated newsgathering images on display at The WDAU-TV Review, a comprehensive sight lovingly assembled by one Carl Abraham. YOu don't have to be a flaming TV News geek like myself to enjoy this broadcast time-capsule, but it probably doesn't hurt. The hairstyles alone are worth the trip.
Posted by Lenslinger at 8:44 PM 2 comments:

It was the dawning of the age of ‘COPS’ and my small market newsroom feasted nightly on a diet of easily-scored crime and grime. I myself was young and dumber, living on Ramen Noodles, blue lights and scanner traffic. If handcuffs and adrenaline weren’t involved, I simply wasn’t interested in pointing my camera at it. Luckily, action and mishap abounded; between the three counties I covered, there was more steady bloodshed and wife-beater buffoonery than you could ever shake an oversized bag phone at. Already enrolled in the Roy Hardee Spot News Institute, I studied under a trio of street-level lens-masters, fierce competitors named Paul Dunn, Andy Cordan and the wizardly Woody Spencer. Together, these three wise cameramen showed me the Ways of the Photog, all while eatin’ my lunch on a daily basis. Somehow, I got through it.

I digress though, which is probably something you should expect by now. I’m just trying to capture the madness of that brief point in time in the early Nineties, when every hard-ass with a badge clamored for close-up and I was welcome anywhere. Take the early morning drug bust. A time honored tradition among the tri-county taskforce set, these pre-dawn raids on street level dealers are more fun than a thousand stale press conferences. Laws and attitudes have changed since then, but for a brief time in the early nineties, the local ‘cop shop’ beat was a wild west frontier of its very own. I of course, was a willing participant and not always a very smart one. Back then I’d strap myself to the hood of a police cruiser if I thought it meant a funky shot. At the very least, I’d get up early and meet a rolling posse of undercover agents for a breakfast of grits and biscuits before ‘jumpin’ in shotgun’ for a few dozen rounds of squad car round-up. Back then, even I loved the smell of mace and videotape in the morning.

But it rarely amounted to that, as the targets of these raids barely batted an eye at the sudden ambush of handcuffs and high-and-tight haircuts. Mostly they seemed annoyed at the timing of said arrest, much like a sailor learning he’s about to deploy. More than a few cocked an eyebrow at me, taking in my lens and logo as stocky men in jeans and windbreakers went through his pockets. Sometimes they’d smile to reveal gold teeth or point me to their tattoos. Other times they’d swell their chests and shoot prison yard stares at my never blinking lens. Once a huge redneck in an unbelievable mullet body checked me into a wall as his beefy escorts dragged him out of his double-wide. Perhaps by accident, the deputies missed the last step coming out of the trailer and the shackled man went down hard on the concrete before being stuffed into a marked car.. More likely, the sworn officers were simply on a task force high, intent on carrying out Operation Pipe Cleaner or Task Force: Elm Street or whatever manly code name they were using that week to make themselves feel like they were on a much nobler mission, not just escorting guests through the revolving door of our nation’s justice system.

However I wasn’t there to judge, but to record it for the greater good - or at least a tease-able story in the Six. If I was jazzed on the access, some of the Po-leece were a little over the top. I remember one marathon ride-along when a certain police chief who popped up front and center in my lens, (Hege-Style!), gun drawn and jaw set as his most beefed-up deputy used a battering ram the size of a torpedo to break down the tissue-thin door of a broken down crack house. Once open, the cops in mirrored sunglasses poured through the door and up the stairs; I followed the blue glow of the viewfinder bouncing in my face. Suddenly I was in a squalid bedroom, taking it all in on a one inch screen. As a half dozen men with bad moustaches pointed their pistols and barked at a sleepy man in his underwear, I swept the room with my lens and listened to the police chief breathe heavy in my earpiece, As he caught my lens attention, the camera savvy lawman doled out rusty Miranda Rights in a dripping southern drawl, the groggy rock-seller blinked slowly and asked for his cigarettes. As the man with the thousand yard stare caught sight of my camera, his eyes widened and he smiled.

“Is this gonna be on COPS?”

The deputies nearly choked on their chewing tobacco laughing at the man as they drug him out of his bedroom. Later we chuckled about the man‘s remark again, gathered out by the roadside like the Scooby-Doo Gang at the end of an episode. But I had to run, as my bosses wanted a noon live shot from the police station. I made it that day and ended turning my umpteenth early morning drug round-up into quite a bit of evening newscast fodder. By the time I headed for home that night I had worked a 14 hour day. Ninety minutes after I arrived at my apartment, my wife shook me from a deep sleep and thrust car keys in my face. Eighteen hours later, we welcomed our firstborn child into the world.

As a TV nerd growing up in Saulston, N.C., I spent an awful lot of time watching the local news broadcasts emanating from Capitol City. Raleigh was only 45 minutes away of course, but the glitzy world of WRAL seemed a million miles away from my flat, rural locale. With a simple twist of the dial to number five, a team of nylon-suited newsgatherers leapt from the screen, slinging their flashy betacams and brandishing oversized microphones. Under the steady anchorship of the avuncular Charlie Gaddy, the station left a lasting impression on my young ambitions. I celebrated the day they unveiled their brand new Sky 5 chopper the way other kids celebrated their favorite team's Superbowl win.

Fast forward 25 years. I now know WRAL to be a giant to the East - a fabled place I once intended to work at, until I wandered into the hallowed halls of El Ocho. Ever the innovators, RAL has long impressed me (and legions of others) with their forward thinking. Now, their respected photog staff is taking a small step (and a giant leap) into the blogosphere, launching a collaborative site seemingly endorsed by the station itself. At Under Exposed, you'll get to know...

...the thoughts and ramblings of TV’s most under appreciated members… The TV News Photographer. These men and women are the slightly tilted people who face hurricanes, mobs, dangerous suspects and all manner of ill attitudes to bring you the incredible pictures you see on the air every evening. They are also the people who touch your heart, make you smile and take you fascinating places through the glass on their lens...

What a wonderful description of my chosen craft! By allowing their talented staff to expound on their adventures, WRAL is taking full advantage of the kind of in-house creativity present in photog lounges far and wide. They're also extending a new kind of access to their viewers, providing an eager peek behind the curtains that fans of all TV stations are known to clamor for. I look forward to the day when all broadcast outlets embrace the information renaissance that blogging represents. So extend a hearty welcome to the lenslingers of WRAL and Good Luck - as keeping a site vibrant can be a bitch! But as the many blogging photogs of WGHP can surely attest, it’s a logical extension of a most illogical line of work.
Posted by Lenslinger at 7:36 PM No comments:

Back to the Grind 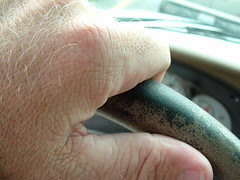 Having just led a family safari through the Sunburned Neon Hell that is Myrtle Beach, all I wanted from my first day back at work was a little peace and quiet. For once, the News Gods agreed, assigning me a couple of shoots that required no more critical thinking than delivering a few cartons of milk. Normally, such errand boy endeavors fill me with spite, but today I was more than happy to tackle the lack of intrigue at hand. As I piloted my news skiff down a rainy Randolph County road, I rolled down the window and let the ensuing spray soak my hand. The cool droplets of the foothills were a welcome change from the blistering stupor of the South Carolina boardwalk. Settling back in the driver’s seat, I put on some Mellencamp, watched the wipers dance and thought about the promise of Fall in the Piedmont.

Even before moving west of Raleigh eight years ago, I adored Autumn. Who wouldn’t, when the insufferable humidity of a Carolina August fades away, leaving crisp evenings and chilly mornings and renewed appreciation for good coffee? Couple that with the haunting colors of hardwood leaves in their final death throes, and you have the making of a truly spectacular season. Of course, today’s gray haze was less than photogenic and we still have more than a few dog days left, but can you blame an aging camera caddy for getting giddy when the weather pretends to break? If you can, you really should get out of the office more. It’s often the only place I can get my head straight...

Like today. With every mile I put between me and the station, the clearer the horizon appeared through the windshield. For a while, anyway. Squinting in the distance, I noticed the station’s tower looming over a far-flung treeline, it’s strong signal penetrating my thick skull. Suddenly crumpled papers and scribbled dates appeared on the worn screen inside my head, flashing scenes of future gigs and annual sojourns: In two weeks I’ll travel to Memphis for a whirlwind tour of the American Idol audition madness. Such a trek into the drama queen psyche comes with many twisted vistas, and I look forward to blogging it as it happens. After that comes Furniture Market, the GGCC, and of course the prerequisite mad dash eastward for continuing team smotherage of whatever hurricane chooses to crash our coast. These hallmarks of the Fall are familiar ground to yours truly, and I look forward to the taking my half dozen readers along for what always promises to be a damn bumpy ride.

For now, though I’ll keep cruising the backwaters of my rainy Thursday - knowing that, in this business, the occasional quiet shift is usually interrupted by a great thundering clatter of crisis and chaos. I’m as used to it as an absent-mined bookworm can be, but YOU, ladies and gentlemen, might do well to buckle up...
Posted by Lenslinger at 8:09 PM 3 comments: