2007's almost in the can and your faithful lenslinger is feeling spent. Thus, I'm taking a break; my first real sabbatical since November of 2004. Viewfinder BLUES will return in January. For now I need to rest, open some presents, nibble on my memoir. While I'm away feel free to poke around the archives, lodge a complaint or groove on the above slide show. Finally, thanks to each and every one of you who stops by this sacred (to me, anyway) site. Know that your visits have been a great source of encouragement over the years, leaving me more determined than ever to file something of worth. I'll get back on it when the calendar flips, promise. Until then, here's wishing each and everyone of you a grievance-free Festivus. See ya in '08!
Posted by Lenslinger at 7:35 PM 13 comments:

“This sucks.” I nodded at Whitey’s words as we looked out over the apartment complex parking lot. In the distance, a firefighter tossed clumps of debris from a second story window as a half dozen detectives watched the curtain of soot fall to the ground below. Nearby, a women slumped around her cell phone and rubbed her eyes. A steady breeze whipped the ribbons of hastily strung tape back and forth, but the rustling of the bright yellow plastic was drowned by the roar of a half dozen fire trucks. I saw it all through my viewfinder, where tragedy and happenstance are clinically rendered in black and white. Zooming in on the where the glass once spanned, I opened the iris until I could make out flashlight beams dancing in the black window space. Not sure if I’d use it, I recorded the shot anyway. In truth, I was just mopping up.

Hours earlier, I’d rolled up in a live truck only to have to debate a police officer on where I might park it. Once we came to terms, I grabbed my gear out of the back and began walking up the street toward the fire trucks, only to be summoned back by another officer. ’What’s their trip?’, I wondered as I returned the cop’s sour gaze, A few minutes later I found out, when the morning producer called my cell phone. Seems the apartment complex I was standing across from was more heavily damaged than I could see. Ninety minutes earlier, flames erupted from one unit, eventually gutting it before damaging three others. Firefighters arrived and kept the blaze from spreading, but once they entered the unit, they found two people inside. An ambulance rushed the pair to a nearby hospital, where doctors pronounced the younger of the two deceased. Jaden Shoffner was five years old.

The death of the child had not been confirmed when Eric White crawled in Unit Four and roared out of the station’s parking lot. Thirty minutes later he’d join me on scene, review my footage of the smoldering apartment complex, pick a soundbite from my interview with the fire department’s Public Information Officer and write a terse, forty second script around it. After trying like mad to establish a signal, we were forced to drive our live truck two miles away to the police department, where we knew we could ‘get a hit’. Once we did, heavy cable unfurled, a tripod magically erected and brisk editing ensued. By the time they took our shot at noon, that frenzy had faded. Standing center screen, Eric delivered the news with the appropriate grimace as the director punched up the heavily-edited clip I’d fed to the station ten minutes earlier.

“This sucks, all right,” I said to Whitey when we returned to survey the scene, “but what sucks worse is how comfy we've become here..."
Posted by Lenslinger at 11:39 PM No comments: 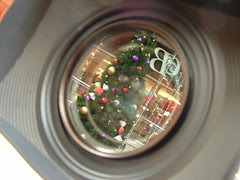 So it’s a week before Christmas and much of your reporting staff has wrangled a day off. What do you do? Well, if you’re the suits at El Ocho, you turn to your industrious photogs, most of whom only wish they had the day off. That’s what happened this morning as a trio of lensmen fanned out across the Greater Piedmont Googolplex to make some television -- all by their lonesome. In that, there is nothing new. Shortly after those guys in the horn-rimmed glasses fired up the first test pattern, some joker grabbed a camera and went hunting solo. Since then, thousands of anti-social auteurs have hoisted the lens, asked the questions, written the script and edited the footage - usually without all that pesky credit!

But this isn’t about credit. Rather, it’s about the art of the grab; that practiced act of gathering data with one eye in the viewfinder and the other on the clock. Why the emphasis on punctuality? Simple, when some caffeinated housecat is counting on you to fill a two minute news-hole come five o clock, you ain’t got time to dick around. Sure, I wanna sprinkle my coverage with nuance and beauty, but it doesn’t matter how splendiferous my pictures if I don’t get the damn thing done in time. It’s this economy in thought and action that separates the broadcast news photographer from the filmmaker, the commercial producer, that dude in park interviewing squirrels with his camcorder. No sir, they’ll be no masterpieces forged on our watch. What we do is TV news - with or without a reporter.

Now, I’m not here to slam the reportorial race. God knows I’ve done plenty of that in the past (most satisfactorily in this magazine article). What I do hope to drive home is this: electronic news can be collated a variety of ways. Most polished of course is the two person crew. We in TV have refined that approach to the point of parody. The over glossed correspondent, the ubiquitous live shot, the impromptu nod shot after the fact: all perfectly acceptable components to the clattering machinery that is your local broadcast. But the solo paradigm is equally viable when used correctly. My bosses seem to understand this and it’s kept me in the game far longer than if I simply piloted live trucks. The only reason I even bring it up is to show the sages and the haters that shooting stag ain’t so damn newfangled after all. Now on with the show:

Joey Flash was first out of the gate. A relative newcomer to the solo mode, he more than makes up for it with enthusiasm and an oddball persona. Before I could even set up my story, Joey was out the door, mumbling something about car dealers putting toys together in Burlington. What he returned with was a cogent piece of coverage that was shot, written and sliced with care. Will it affect the rotation of the Earth? No. Is it better than some day-of projects I’ve seen two people produce? Damn skippy.

Next up was Weaver. If we haven’t heard much from this consummate cameraman as of late, it’s because he’s been too busy raising the bar around here. Always in demand by reporters seeking a top-notch showcase, the Mighty Weave doesn’t get out that much by himself. When he does however, he proves himself a suitable foe for yours truly. Today he tackled the otherwise mundane subject of holiday shipping with a lesson in how to shoot and edit repetitive action. It may not be the slickest minute-twenty on his reel, but if I know Weaver, he’ll find a trophy-race where it will no doubt dominate.

As for our last piece of TV tonight, it’s yet another look at retail hell. Actually today was the first time I set foot in a mall in six months. But my vague directive to do something on holiday shopping called for a visit to a local thunder-dome, so I saddled up. Not wanting to take to the chest, I avoided Greensboro’s Four Season Town Center and headed straight for Hanes Mall. There I noshed on a Cin-a-Bon, battled food court zombies and pitted the sexes against each other. The resulting piece will win me no awards, but I’ve a lot less on air with a lot more help.

So, what’s the point of this overlong epistle? I dunno - just wanted to show you how the sausage was made. I don’t expect to sway non-believers. They’ll no doubt point to a lack of hard-hitting facts or poofy hair-do’s as reason for their disdain. That’s cool. But maybe now you’ll better understand why my colleagues have to choke back our bile whenever some new media windbag lectures us on how to produce video alone.
Posted by Lenslinger at 9:44 PM 4 comments:

We may come across as low level technicians, but within the ribcage of every TV news photographer beats the heart of a storyteller. Why else would an otherwise lucid individual scramble down a rainy riverbank to shoot video as would-be heroes plunged into the drink? Or fight Mad Max traffic to catch a few electrons of an upturned turkey truck? Or prop up in the catacombs of some county-owned space while a yak in a thousand dollar suit yammers on about fiscal responsibility. Why else would one spend their time fanning inanity? Trust me, it ain’t the paycheck. Rather it’s the insider’s high, the daring to bear witness, the insatiable need to communicate that’s driving most of us behind the logo. That and the job makes for potent anecdotes at the holiday cocktail party. Just sayin’.

These days such occupational blather translates well to the web, where fractured dispatches and smarmy yarns litter the fruited plain. I for one have been aping the great beFrank for more than few years now. In that time, the Photogs Who Blog sidebar has grown exponentially; a living compendium of the kind of lies, truths and alibis once found only in the courthouse hallway scrum. Like the serial news-gatherers behind them, the pixilated missives display an well-honed insouciance, a disregard for authority and a practiced grip on their sense of the absurd. Yeah, I know milkmen have blogs too, but for my lack of money I’ll stick with the outgoing interlopers to the right. I pour over their every post but I’ve not pimped them out nearly enough.

All of which brings me to one Duff McMandar, the Sacramento news shooter we’ll call ‘Chris’. An accomplice of the nomadic El Guapo, this lens-toting joker has been a favorite here at Lenslinger Central for quite some time. The only problem: dude makes me feel old! Here I am waxing pathetically on my midlife crisis while Duff’s doing kegger headstands, vedging with The Hedgehog or serving up guerilla cinema. Man, to be twenty-four again! Of course, when I was that age the only home computers to be found were in dungeon master bedrooms - and since my dice don’t roll that way, I remained unplugged. Now however, anyone can slather their thoughts on-line- but it takes one serious clown to make it entertaining. Duff sure does and on the occasional fortnight I ignore my site, it’s his silly ilk that forces me back to the keyboard.

Not to mention, he's got one of the most incredible skydiving photos I’ve ever seen. Makes me wanna step step off the skids again!
Posted by Lenslinger at 8:40 PM 1 comment: