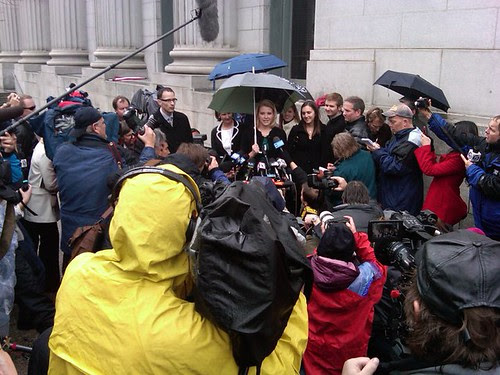 No snarky remarks tonight, just a great big dip of the lens to Elizabeth Smart, seen here addressing my ilk outside a Salt Lake City courthouse. After what she's been through, it would be perfectly understandable if Ms. Smart shunned the scrum. Instead, the now 23 year old has exhibited unswerving courage, offering crisp testimony that helped convict the reprobate that enslaved her. That she has remained so poised under the crush of numbing inquiry has (almost) restored my faith in a legal system that too often adds to the maladies of the bankrupt and the vanquished. Elizabeth Smart is neither and her resiliency is to be admired, if not studied. As for her tormentor, he can trumpet his delusions in the penitentiary, where hopefully there's an even bigger victimizer just itching to feast on the bones of one Brian David Mitchell.

Were it up to me, they'd be soot by now. 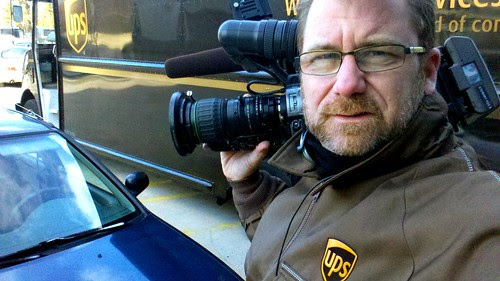 Ever wonder what it's like to be a UPS Driver? Me neither, but when the bosses brought it up, I knew enough to feign interest. Next thing I know, I'm strapped into the jump-seat of a speeding cargo van, wondering if all that truancy in high school was completely necessary. Turns out it was, for without that lack of career planning, could I have possibly enjoyed the spoils of so many different gigs? College professors don't get to dress up as delivery men and play 'fly on the dashboard' - and with good reason! Would YOU wanna sit through some labored dissertation on the repetitive ebb and flow of the proletariat? Hell to the No! You'd much rather half focus on a series of flickering pictures as an off-screen voice dribbles out factoids in a rhythmic, soothing cadence. Looks like this IS a job for Lenslinger!

All of which still doesn't explain WHY I'm decked out in resounding brown. Quite simply, they made me. Yes, when the savvy folks at the local UPS hub green-lit our story pitch, they had but one condition for the cameraman: Dude better represent! I chuckled at first, but having already worn everything from a surgical scrubs to an insincere grin just to score a story, I quickly crumpled. When I called in my measurements a day later, it was all I could do NOT to request my shorts be of the Jim Dangle variety. That was probably wise, as the day I chose to ride along didn't see temps rise above the thirties. Luckily for me, I was by then swaddled in the finest non-broadcast logo-wear this side of that Hooter's down by the airport. You know the one...

In retrospect, the undercover duds were a stroke of genius, as it allowed me to blend into the scenery. When my host driver - a prince of a fellow by the name of Christopher Pritchett - stormed the gates of a swanky office building, I fell in behind him and buried my face in the cup. Let the security guard wonder why that UPS dude is rockin' a TV camera, instead of a box of printer ink. Later, I found myself loitering outside as my brand new bestie dashed in and out of businesses. Had I NOT been incognito, a few passers-by might have called the law on that scruffy putz hanging around the UPS truck, As it was, I only caught one lady fondling her cell phone and that thing was so outdated, it had an exhaust pipe! Still, lady had my ticket. Must have been the beard.

See, UPS drivers are clean shaven. Maybe some of them have mustaches, but the kind of chin cabbage I grow is strictly forbidden! I nodded knowingly the first time one my new brethren in brown mentioned it, but by the third time, I was beginning to wonder if they expected me to shave for the occasion. No bother - ten minutes into our stop-and-start journey, I was pulling my hair out, thanks to a wondrous device known as the Go-Pro. A high tech HD camera in a rugged case, the Go-Pro resembles little more than a cube on a stick. But plant that sucker on a windshield and watch the point-of-view footage pile up. Or, do like I did and screw with the damn thing while it records your frustration in a series of unflattering JPEGs.

But enough of my mug - let's meet the players! Christopher Pritchett is a 20 year veteran of the corrugated force and, given any opportunity, will tell you just what Brown did for him. A few syllables in, you realize the guy is sincere. Then you realize what a stand-up company UPS must be, for when the local news crew came calling, this global giant didn't refer to us to some suit in New York. Instead, they threw open the doors and let me shoot whatever I saw fit - as long as I sported the appropriate colors in the process. As a result, El Ocho got their sneak peek, UPS generated a little local love and I added more coursework to my Doctorate Studies in Cameramanthropology. So thanks, UPS! I don't know that the following piece of TV will win you many new accounts, but I for one will never look at those big brown trucks in quite the same way again...

Logos in the Mist 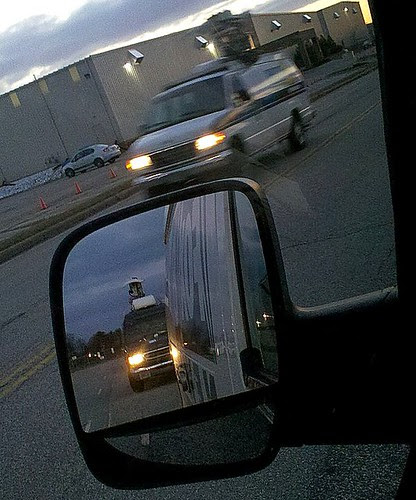 Sure, it's just a snapshot from yesterday's Obama visit, but something about this picture Weaver took yesterday morning really weirds me out. The threatening sky, the blurry logos, all those retractable masts - YEESH! Makes my skin crawl. Still, I do recognize my hives for what they are - an allergic reaction caused by overexposure to these ornery beasts. Too many times I've hunkered down inside one of these immobile newsrooms while a hairspray addict clamored for a clever way to narrate calamity. Am I projecting? You betcha, but we all have chinks in our armor and mine is a deep-seeded disdain for box-vans wrapped in gaudy promises. Luckily for me though, these vessels of editing and angst are already on the road to extinction, soon to be replaced by wafer-thin eyelid implants. Yeah, it may take a while, but I envision a day when all it takes to go live(!) is a twitch of the temples and a pile of wi-fi enriched recyclables...