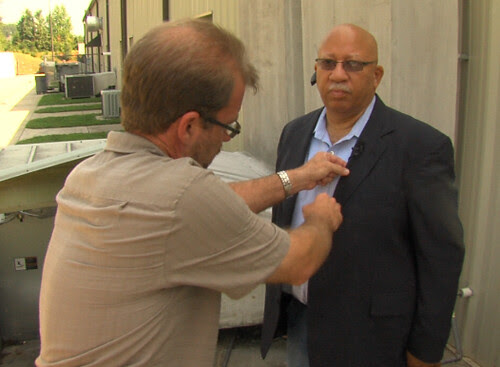 You there, with the leisure wear and thinning hair... Just look at yourself: forty four years old and still running your hands over complete strangers in the shadow of some skeevy newscast. What would your children think? Oh, that’s right. They think you’re a cable installer. It’s probably best that way. For if they could see the way you spend your day: scouring the hinterlands for a minute-fifteen of fluff, pursuing that minutia as if it held the very keys to the planet, ruing the day you staggered into that first affiliate... it’s all just so predictable. Would life have not grown rosier has you instead stumbled into some hallowed hall of higher education? That way your world outlook would have been shaped by a sheltered expert, not a revolving door of lead investigators, ghetto preachers and gassy passers-by.Who knows what heights you could have reached had you not burdened with yourself with a Sony you didn't even own. I don't wanna tell you how to live your life (or mine), but twenty some years into this silly gig and you're just now realizing you got the world's most interesting dead-end job?

Worse yet, you been at this so long, there's really no hope for recovery. It's not like you could go out and get a real job! No, you'll never be promoted to Vice President of Stapler Arrangement with that limited attention span of yours. You know, the one you fractured years ago with all those disposable vignettes you've foisted on an unsuspecting public. And that driving record of yours? No church will ever ask you to cart around their flock, that's for sure. But perhaps the most troubling aspect of your diminished condition? That half-baked notion you've seen it ALL. Look, two decades of putting every type of person and predicament on the news does not an education make. For insight like that, you have to rise in the corporate ranks, get a teaching fellowship or at least be put in charge of a french-fry vat or two. Only then can you possess the kind of enlightenment that comes with random letters behind your name, or a good ole fashioned hairnet. So, do us all a favor there, Fellini: Back off that deadline. The only thing you're killing is any hope your Mom and I ever had of you becoming a professional bowler.  She may still claim your kind, but me... 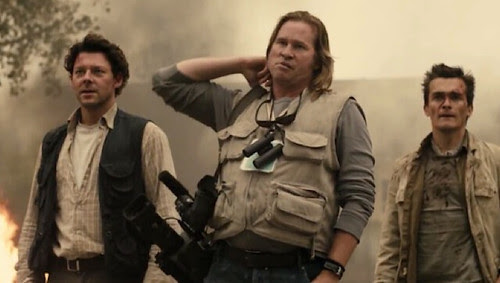 Great filmmakers have tried and failed. Now, the dude who made Cutthroat Island is tackling the photog psyche. Sigh. Now, don't get me wrong. I hope 5 Days of War will be a bold and brainy blockbuster, but something tells me it's gonna be more like that wretched Godzilla remake than the next Broadcast News. Then again, we TV stevedores have been taking it on the unshaven chin for as long as Hollywood has seen fit to feature us. Whether it's a romantic comedy or a political thriller, the guy (or gal) behind the glass usually comes off as some thwarted doofus more comfortable with cameras than conversation. Okay, so that's not so far from reality, but still, movie-makers seem to go out of their way to deride the role of the television news photographer. What with our odd job and sensible shoes, we're natural bit players, comedic foils, roaming props. I get that, but when the most textured interpretation of a TV News cameraman belongs to Chris Elliot in Groundhog Day, you know your profession has been cinematically shortchanged.

Now this... a glossy thriller about the Russian-Georgian War, as seen through the lens of an American news crew. I'd feel better if it were some animated schlub holding his camera the wrong way. Maybe then, we could chalk any and all discrepancies up to technical mistrust between the trades. Otherwise, we're going to be forced to defend the cross-cultural bumblings of a fictional camera crew - as envisioned by the genius who brought you The Adventures of Ford Fairlane. How could THAT go wrong? It's not like the Finnish wunderkind went out and bagged some has-been actor for a pivotal role... Wait a minute - is that Val Kilmer?  Sure, he made for a mean Morrison and his Doc Holliday was tops, but a photog? Was Richard Dean Anderson unavailable? Don't answer that; just know that we here at The Lenslinger Institute don't hold out much hope for a slick flick about a messy war helmed by the guy who tried to wrap a pirate franchise around Geena Davis.

In fact, we're delegating this whole messy matter to broadcast archivist Amanda Emily, who after hanging out with these losers, knows a thing or three about cameraman semantics. Now if you'll excuse me, I have to gather some rotten fruit for the premiere.
Posted by Lenslinger at 9:36 PM 4 comments: If you ask him about 'that train wreck', he'll tell you to be more specific.

He takes his live truck funk with justatouch of pretty reporter hairspray - yet he hates the taste of catch-up.

Politicians, cops and models slow their roll whenever he looks their way.

He can drive blindfolded at night on a mountain highway, but won't park a call in the newsroom for love nor money.

Judges, bums and drum circles play to HIM.

He's backpedaled before Presidents, bum-rushed the funkiest of dumpsters and bodily jostled rock stars. All without changing his socks.

He can smell darkness.

If he happens upon a picket line, protesters remember what they're mad about.

Many a waking bailiff has wish him dead.

He's escorted more gorgeous females to their lunch table than a Hollywood agent.

He's the reason Dog the Bounty Hunter dresses that way.

His very best stories, he keeps to himself.

He's not even The Most Interesting (Camera)Man in the World, but dude's survived lunch meat riots, crashed landed hot air balloons and mastered his craft before most of his cohorts put down their Sippy Cups.

Stay thirsty, my friends.
Posted by Lenslinger at 8:37 AM 2 comments: