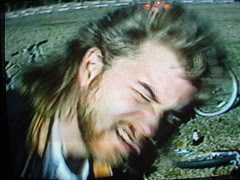 Upon stumbling into his first TV station in late 1989, Stewart Pittman began his journey to the Fifth Estate. A quick mastery of studio production skills at WNCT-TV left him sleepy and bored, so he wormed his way into a Creative Services gig and began shooting criminally bad local commercials. There he would have remained had it not been for an unlikely hostage incident - a prolonged police stand-off that Pittman watched through the lens of his very first betacam. A news junkie was born. From there, Pittman delved into the dark arts of TV News photojournalism, learning every facet of the lens and the communities it reflected. Soon he even stepped in front of the camera, the latest in a loooong line of reporter-photographer one-man-bands. Fame and fortune did not follow, but Stewart learned more from the means streets of small market TV than from any of those communication classes he never attended. Hurricanes, homicides and a thousand groundbreakings followed, until the young man once so in love with the TV News business did the unthinkable. He took a job in Promotions.

The next couple of years felt like a decade as Stewart learned to crank out commercial dreck for finicky management. Now a father of two, he threw himself into the world of trafic logs and contest spots and tried to forget what it was like to loiter on the edge of calamity. Having climbed the corporate step-ladder, Pittman found he hated the view. So he ran screaming back to the world of and ride-alongs and ribbon cuttings, taking a position as a photojournalist with WGHP-TV. There he took his journeyman skills to another level, working with anchors and reporters on every assignment imaginable while producing a steady stream of his trademark solo work. As he mastered his own broadcast craft, the now-veteran photog sensed the implications of emerging media. Stewart thought he might have something to say about it.

Enter Lenslinger. In mid-2004, Stewart launched a not so humble blog, Viewfinder BLUES. Soon after, he attracted a loyal readership from across the globe, including many industry insiders who found the site via his many mentions on the TV News website News Blues. Since then, Pittman has web-published picture-heavy diatribes, from critiques to essays, missives to memoirs, rants to reflections. 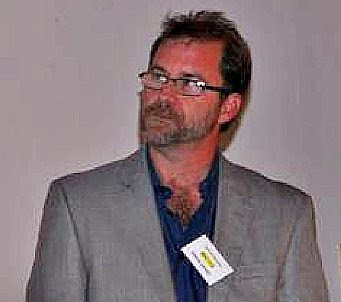 These days, he enjoys speaking to various groups about television news in the information age, clipping hedges out behind The Lenslinger Institute and corresponding with the any broadcast journalists delusional enough to seek his counsel at lenslinger@triad.rr.com. A voracious reader and a tangential member of the Piedmont litterati, Stewart can sometimes be found riding his mountain bike, paddling his kayak or simply putting off work on his first book.

"Stewart Pittman at Viewfinder Blues is an oddity: a lensman who can write. And his latest report from the frontlines of journalism is a gem. It’s another great piece, written by a guy who (despite a certain surface cynicism) clearly loves what he’s doing." -- Mark on Media

"He writes like no one else I've ever read." -- Natural Born Stringer of b-roll.net

"There’s no one else on the web that captures the daily grind of the news business like Stewart.  Check him out once. You’ll be back for his smarm, his style, and his swagger.  The dude abides." -- Rick Portier, author, Shooter in the Crosshairs

"There are hundreds of bloggers in Greensboro, but this guy’s site is in a class by itself. Lenslinger’s been a camera jockey for television news since 1989 and currently shoots for FOX 8, but he’s a writer at heart and he uses this blog to feed that particular jones. He posts media critiques, reflections on entering middle age (with pictures) and inside tales from his very specialized gig." -- Brian Clarey of Yes! Weekly

"Stewart is a contemporary news photographer who understands what's taking place in the media world. Go read him." -- Terry Heaton of Pomoblog

"I see his work on the nightly news all the time, but reading the stories behind the stories is far more interesting than the six o'clock news will ever be. If this man isn't signing me a copy of a newly published book in less than a year (I know for a fact he's writing one.) then the entire publishing industry is no more than a lost cause destined to rot until the stench is more than we can bear." -- Billy the Blogging Poet

"The way this guy writes, I'm surprised that he hasn't already made a jump to a more fulfilling career." -- Jamey Tucker of Blogsquat

"Stew, the way you just described this man's story in your own words was more interesting and meaningful than any twenty second vosot could be. My friend you are much more than just a lenslinger, you are a journalist. Edward R. would be proud." -- Ken Corn

"Lenslinger blogs on Viewfinder Blues and has a way with words that few print people can equal. Plus he’s a veteran of the one-man-band, a regular VJ with attitude." -- Cyndy Green, Videojournalism

"Come to B-roll, tender a request, and you shall learn from one that has traversed the cosmos from beginning to end. From a cosmic being of such unimaginable complexity, that both his corporeal form and his consciousness sit astride twelve dimensions at once! From Lenslinger...who has bathed in the spectral ethers which swirl beyond time. Ask and learn, young tog." -- Low Lt. of b-roll.net

"Stew is in a class by himself because he is a  fantastic writer.  But that doesn’t say it either because there are many fantastic writers blogging.  You have to read his posts and then you  can believe as  I  do that he could write about the telephone book and make it sound interesting." -- Brenda Bowers

"There are few bloggers out there who capture some of the day-to-day challenges of journalism (and the effect it has on your soul), whether he’s writing about the humour of covering news...If you want to know about journalism, as it is practiced, read Stewart. Daily." -- Mark on Media

"Viewfinder BLUES is a blog by a cameraman who can write like a ******f****r . My blog is by a writer and editor who can't photograph his way out of a paper bag. I am not worthy." -- Colin Brayton

"You have a multi-layered, sophisticated ambivalence toward your profession that cries out to be the subject of its own story, and you can be onscreen." -- Melinama at Pratie Place