The Way It Ain't 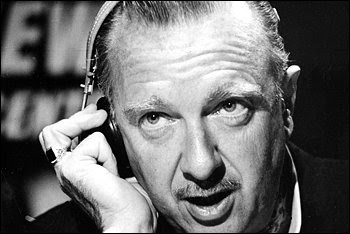 Far be it from me to piss on anyone's hagiography, but amid all the misty-eyed remembrances of Uncle Walter, can we examine just how badly we effed up his legacy? Like Cronkite's beloved Apollo Program, early television news was a monument in motion. Never before had the machinery been in place to blanket the globe with real-time data. The immediacy of radio, the precision of print: early television news bristled with potential before it ever left the pad. Best of all, those souls at the top of the stack took their missions seriously. With stentorian voices and natural born gravitas, Cronkite, Murrow and many more forged an exciting new path in intellectual exploration...

But something happened after lift-off. What was a rigid template of factual import morphed into a gelatinous tube of gimmickry and game show faces. Soon the pattern was all too predictable: Breathless headlines, a smattering of hard news, Commercials, super-duper dorked-up weather, Commercials, big board sports!, More Commercials, then back to the studio for a wide shot of toothy lookers snickering over something silly. Not so simply put, we chortled, hyped and adored ourselves into oblivion. From the canned banter to the feigned urgency to the whole crime and grime paradigm, WE FAILED OUR ELDERS. That includes me, of course. The Z-Block fodder I so enjoy producing wouldn't impress Uncle Walter much. He's prefer hard news rife with detail and analysis - you know, the kind of thing you have peel open a newspaper to read.

So where do we set our vectors for now? How about a new frontier of credibility? But we damn well better blast off, for our window of opportunity is fading. See, what used to pass for the voice of God now sounds like so much sorority house blather. Bloated and gloating, there’s not been an industry so ripe for revolution since Kodak dismissed digital cameras as just some passing fad. Viewers are through being led by the avuncular hand. Now the audience can wander around unencumbered, explore hidden new worlds without the need for a narrator's flair. News nerds can cue up that story they missed when the dog soiled the rug - without having to sit through endless teases rife with close-ups and clichés. Best of all, newscast consumers can file a complaint, register a request, or add to the subject matter at hand with wisdom and insight once deemed unworthy of inclusion. The end result: a deeper, more detail-oriented news product - one that boasts the immediacy of moving images, the analysis of long-form print and the interactivity found only in a hyper-linked world. It's a brave new world out there, on that the early explorers of our once great field shudder to recognize.

I too watched Walter Cronkite as a kid and never thought to question him. He's gone now and while the sepia toned memorials are more than deserved, it's the once promising frontier he helped discover that I truly mourn.
Posted by Lenslinger at 9:45 AM 3 comments:

Hey, wanna make the photog in your life wince in pain without - you know, touching him? Simple, whisper these two words in his (or her) one good ear: "Walking Tour". Chances are they'll double up on the spot - or at least grumble a bit, depending on how much time has passed since their last extended amble. Me, I'm still aching from Tuesday's forced march through a local elementary school. It seems the old place has been making teachers and students sick for y-e-a-r-s. Headaches, rashes, nose bleeds; just a few of the symptoms a group of parents described to federal inspectors before the whole lot of them decided to traipse through the campus in search of noxious smells, bleeding walls or even a certain ooze. Of course when I heard experts were touring a building known for making its occupants sick to their stomach, I knew I had to be there!

Actually, I didn't have much choice. The grown-ups said 'GO!' and since those damn lottery numbers didn't pan out the other night, I went. Not that the federal inspection team wanted me there. Their leader, a sophisticated lady with a cool British accent, eyeballed me the moment I came crashing into the media center, where a table full of teachers and parents threatened to bring in stool samples and gnarly Polaroids if something wasn't done about their sick school. If she didn't like the looks of my lens, I thought, wait until she get a load of my friends. See, this is the Greater Piedmont Googolplex, home to three TV stations and a cable news outlet that acts like one. A bullfrog can't pass a wet fart on the highway without a handful of jaded news crews showing up for extended team smotherage of ToadShit '09!

True to form, by the time the inspectors dismissed the parents and gathered up their clipboards, no fewer than four fancycams waited to follow their every move. And....we're off! You know they may call it a 'walking tour' but the only ones getting their sashay on were the ones wearing wingtips. Those of us in cargo shorts and sweat stains weren't quite so economical in our movements. You can't be when you're trying to be a well placed fly on the wall, one that captures sweeping vistas of the group making their way down deserted hallways and rock-solid tight shots of whatever the hell it is they point out along the way. Thus, I and three of my closest competitors bounced off each other like pinballs, sprinting ahead, falling back, crouching in corners - all while trying not to pile-drive the Queen or her minions into any open, oozing lockers.(Sorry, lady!)

Yes, nothing makes you feel like hired help more than flanking a bunch of out of town experts as they poke, prod and frown their way through your particular jurisdiction. The fact that your not alone only makes it worse, for the presence of a competitor always ratchets up the action. Even though I considered the other lenslingers there good friends, it's my sworn duty to get better shots than them. They of course feel the same way about me, which is why a simple tour of a supposedly mold-ridden school can easily resemble a light saber fight sequence from one of those God-awful Star Wars sequel ( minus the back-flips and bad acting). Truth be told, I had what i needed about ten minutes in, but with every other camera sticking close I didn't dare break away - lest some overdressed expert jimmy open a janitor's locker to find a smoldering, toxic scarecrow stirring a vat of cafeteria peanut butter and that sawdust they use to cover up kid vomit...

THAT never happened, but the slightest possibility that it might kept me in the game longer than my gams wished I had - which - along with the fact that my ass is numb from driving nine hours in the past two workdays - explains why I'm walking kind of funny. That and the fact that Swamp-Ass Season is upon and I finally ran out of that Boudreaux's Butt Paste that Portier gave me.

Sorry, Too Much Information...
Posted by Lenslinger at 9:17 PM 6 comments: 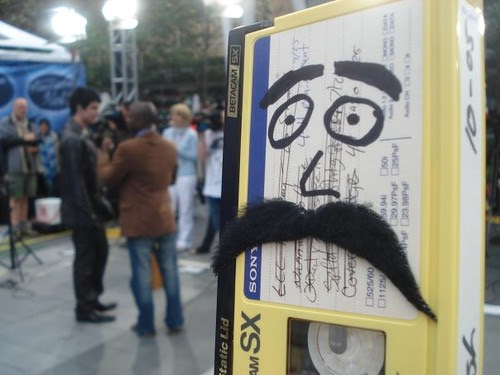 It's tough out there for a tape. Fancy new recording formats, hot news car interiors, cell phones that double as fancycams ... it's enough to make your average industry standard go rogue. That appears to be the case with one Alfonzo Beta - the yellow videotape currently on a quest to become uber-famous. Sure, Bruno's cashing in on that very concept at the nation's multiplexes, but has he been spotted lounging at Lake Tahoe, hanging at a WNBA game with UFC meathead Chuck "The Iceman" Liddell, or crashing the clamor at the American Idol finale? I think not. Even if he did, I doubt that Sasha Cohen dude could have pulled it off with the panache of a certain mustachioed Sony SX. Said to have left a wife and a couple of Mini-DV's back in Sacramento, Alfonzo's known to stay out all night clubbing with little regard to his state of rewind. Will he survive the gauntlet that is worldwide stardom or suffer like so many other cast-off ingenues and find himself compromising his inner spools in some seedy alley off the Sunset Strip? Hard to say, but we here at Lenslingers Anonymous will monitor Alfonzo's trajectory until he achieves one-named fame, lies down to die in the gutter or at the very least score his own development deal with FOX Reality.

Stranger things have happened...
Posted by Lenslinger at 10:23 PM 2 comments: 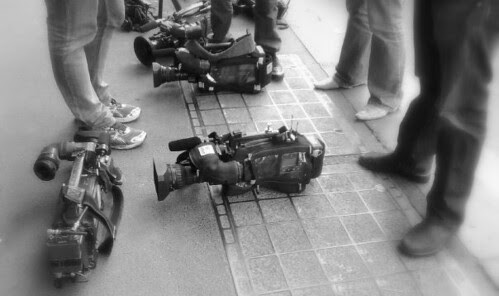 What little I know about Australia has been gleaned from repeated viewings of Crocodile Dundee and making this guy tell me about Survivor: Outback. In short, I'm not UP on all that's Down Under. But I do know scrums, the power of amassed glass and the intrinsic whims of lenslingers. That's why the above shot by Aussie photog 'Widescreen' needs no explanation... Obviously, some dog and wallaby show was mere moments away, giving this grizzled assemblage just enough time to swap alibis, question each others' lineage and trade tips on where to eat when this particular cluster is done. At least that's how we do it in the States. I for one learned much of what I still remember about newsgathering from these impromptu summits. What judge to avoid when shooting in court, which filter to use inside a crowded school bus, which local ghetto preacher still scored rock ... I can't tell you how much I've discovered in these scared huddles. Of course as soon as the action starts, the lessons are over and whatever mentor I just finished quizzing would gladly body-check me into a prickly hedge if that's what it took to get his shot...

I wonder if they do that in Australia?
Posted by Lenslinger at 6:29 PM 1 comment: