Queens of the Rink 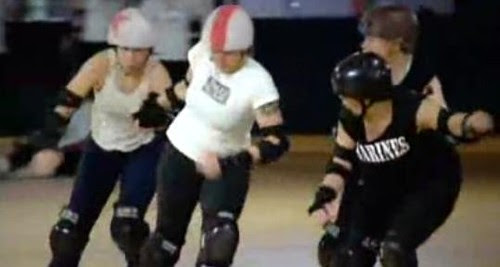 Ever spun in circles with one eye closed while a pack of tattooed women tried to take each other out at the kneecaps? I hadn't, until Bob Buckley and I jammed over to Capital City for a look at modern day roller derby. There we found a dark and dingy skating rink teeming with enough Grrrrl Power to kick-start another Lilith Fair - provided there was some death metal on the playbill. But I don't want to paint the Carolina Rollergirls as brutes, for many of these not so fair maidens are suburban moms. Moms who could pile-drive an entire Jerry Springer audience, but suburban moms nonetheless. Why only half a dozen times did I contract any stink-eye, a relatively small outbreak of criminal conjunctivitis, considering I was trampling through their under lit dojo.

Hey, speaking of light, can we get some incandesence in this joint? I know roller rinks are all about atmosphere, but I'm attempting cinema here! The last person who gave me heat for pointing a light their way was Rusty Wallace and everyone knows he's a putz. Next time don't reach for the throwing stars quite so quickly when the next cameraman fires up his sun-gun. But I ... digress.

Of course, one doesn't breathe the rarefied air of a roller derby practice session without taking a few precautions. I'm talking steel toed boots, protective eyewear, and the removal of any hoop earrings - lest that message therapist hurtling toward you become entangled upon impact. Why in the short time Bob and I surfed the perimeter we saw a finger run over, and angle banged up and more than one woman's dignity being gouged out. Was it any wonder I stuck to the sidelines? That is until one Mr. Buckley did his best Marlin Perkins impersonation, 'suggesting' I join the zebras milling about the infield. Having thrown down the man card, Bob backed away slowly, before taking a defensive position in the snack bar. I watched him there, eyeing Little Debbie, when a Tasmanian She-Devil nearly flattened me.

From there, it was a blur, the fragmented snapshots of a slinger in survival mode. Sure, I eventually made it to the center of the floor, but not before playing 3-D Frogger with a half dozen tattooed ladies. As with most trauma, time began to bend, until I was engulfed in a swirl of striped knee socks, chrome helmets and enough shoulder ink to blot out the ancient disco ball slowly spinning above my head. You know, come to think of it, it was there - forging the ruts of the local Roller Dump - that I first became engaged in our assignment that day... Then again, it's hard not to pay attention when a woman by the name of 'Karma Suture' is tucked into a battle-crouch, coming in fast and aiming staright for your appendix. Just sayin'..
Posted by Lenslinger at 10:24 PM 1 comment: 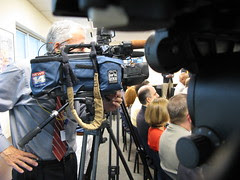 I don't know what YOUR idea of Purgatory is, but from my slice of the risers, it looks a lot like a press conference. Maybe that's because I've attended more electrified gatherings than most capitol punishment junkies. Sure, they're often thrilling in the movies: tense debriefings in which someone thinner, better dressed and more diabolical than any actual podium jockey reveals information crucial to the gauzy montage that soon follows. Not so in real life. No, most pressers pack about as much excitement as your last trip to the restroom. And unless you take a really wide stance, that's nothing to wrap a screenplay around. So while you zip up, allow me to unfurl the following Tenets of the Scrum:

Feeling a bit adventurous? Wanna look 'Continental'? Wife hide the iron? Go to work wearing something garish, wrinkled or reflective and you've guaran-damn-teed yourself a ticket to the undertaker's luncheon.

98% of the self-congratulatory pap uttered into a bank of microphones never. airs. anywhere. But let those batteries in your wireless die and dude with the suit's gonna start reciting coordinates to Osama's hidey-hole.

After a few soundbites, one photog will invariably wiggle out of the scum and begin working the edges of the room for wide shots, reversals and cutaways. Ask us and we'll tell you we're just doing our job, but mostly we're just effin' with ya.

Most semi-circle summits are hastily-convened affairs; cop-talk confabs with scribbled digits and bare-bones production. To pull off a high-tech happening - complete with bad back-light, countless shout-outs and highly distracting background noise - you're going to need a highly-paid consultant.

Speaking of consultants, See You in Hell!
Posted by Lenslinger at 11:27 PM 3 comments:

For years, ace reporter Chad Tucker has told me the racing scene at nearby Bowman Gray Stadium was a reality show waiting to happen. He wasn't kidding. 'Madhouse', an pretty slick look at the world of Southern-fried modified racing, debuted on The History Channel Sunday night and if the premiere episode is any indication, it's gonna be a deliciously bumpy ride. Understand, I ain't much of a race fan. That makes me all but queer in some rusty Camaro circles, but it's my (rather hetero) opinion that one need not possess a patch-covered jumpsuit to enjoy this TV outing. I sure did. The unbridled horsepower, the coiled testosterone, the thick but authentic accents... what's not to love? Bowman Gray Stadium is only ninety minutes or so from Charlotte Motor Speedway, but it's light-years away from the corporate orgy that is modern day stock car racing. At Bowman Gray, the men who climb behind the wheel on Saturday nights are the very same souls bangin' out dents the next day in some cluttered garage. Throw in an inter-generational rivalry, ample editing and a stadium full of fans who would bow up and beat down any Jerry Springer audience and you have White-Trash Pageantry... Unvarnished NASCAR... Tee-Vee GOLD!

That's right: GOLD. As much an anthropology study as a reality show about low-level motorsports, Madhouse (lousiest. title. ever.) features the kind of blue-collar yearning and pit crew euphoria that propelled generations of bootlegger wannabes into the NASCAR stratosphere. The linguistics alone are an embarrassment of riches! In fact, I volunteer to screen the very next episode with a bunch of snooty New Yorkers - provided they let me translate. Maybe then, I can impart some fancy book learnin' on the Yankee set; explain to 'em that twisted syntax notwithstanding, what they're hearing is AMERICA, in all its unwashed glory. It's the same kind of rural verve that made NASCAR one helluva show and the exact ingredient that could put the bite back into a spectacle that's pretty much been defanged. But don't hold your breath. Big time racing will taste more antiseptic with every swig while the unscripted action of Bowman Gray will grow more potent with every sideswipe, sucker-punch and pit-stop. Which is why I'LL be watching Madhouse - every time they fling the doors wide open.

Just don't ask me to go down there and watch it in person. Sorry, Chad.