While I wallow in a painkiller haze, the photograsphere echoes with voices old and new... 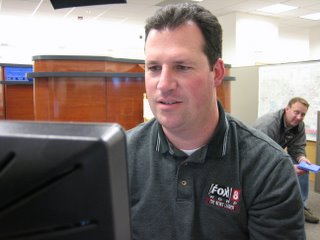 Just down the road, Bluedog Photog has stepped up his game of late. Whether chasing propane spills, reliving grow-room busts or deconstructing bureau life, Ken Cravens has been filing regular, readable reports. He even popped off a shot in MY cubicle recently, but don't hold that against him. 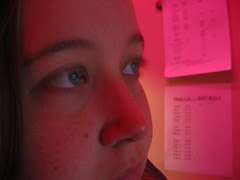 Off the Coast, a photog by the name of CJ checks in from her 'little red box' of an edit bay. Having recently left her native West Coast for the inland prarie sea, she regularly riffs on Sudoku, Spot News and life in the I-Team. Amazingly, it all comes together in the end. 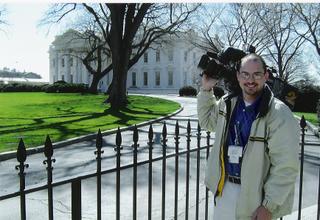 Best new blog title goes to Oreo's Crumbs, the ever reflective site of one Mike Sellers. Though awful fond of his wife's native Denver, this Baton Rouge news shooter's heart is on the Bayou. Hurricane Katrina may have swept away his childhood home, but not his hopeful perspective.

There's a New Guy In The Shop and he'd like to blog about it. With the ink still wet on his EKU sheepskin, Andy Pollard is currently making his bones on the mean streets of Lexington. But this rookie's got a second persona, He's "The Voice of the Indians" in Kentucky's local radioland.

Finally, from the outskirts of Sin City itself, Erin Winking brings us the implosion of an old casino in full Technicolor glory. With a station video link, expertly sequenced stills and a steady string of F-bombs, the endearing eWink provides extensive, one-of-a-kind coverage in a way that only a grizzled photog can. Having blogged the Burlington implosion earlier this year, I'm impressed how easy eWink makes it look. A synchronized event, a thoughtful execution, a Tour de Force.
Posted by Lenslinger at 3:53 PM 3 comments: 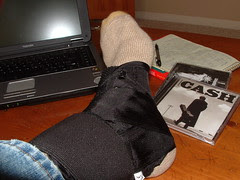 Life hasn't been interesting enough lately so last night I twisted the heck out of my ankle - you know, just to liven things up. I'll spare you the grisly details but let's just say I'm getting too old to run up a tall staircase at sinking-sailor speed. The last time I missed a step like that, klaxons were sounding over the ship's loudspeakers. But that was long ago. Right now I got a throbbing foot, a funny walk and something else to complain about. Did I mention I was supposed to go skiing this weekend?
Posted by Lenslinger at 2:47 PM 6 comments:

"Dude, one more thing. You MUST read 'A Million Little Pieces'. IN-credible." I bid Danka adieu and made a note of the title. This was after all, the man who turned me onto 'The Things They Carried', a wrenching tome that's become a treasured part of my overflowing library. A few days later I picked up a copy of 'Pieces', breaking my personal rule of staunchly avoiding Oprah's Book Club choices. But before I could get around to cracking it open, The Smoking Gun accused author James Frey of making up some of the more salacious details of his celebrated memoir. Suddenly I was intrigued, and not just as a potential reader.

As anyone who's read a few of my posts can attest, I'm something of a struggling memoirist myself. This whole blog thing has been a kick, but I'd planned to document my existence long before Al Gore invented the Internets. So it's with great interest that I watched James Frey on Larry King Live last night. Though Frey stood by his book (as did call-in guest Oprah), he didn't deny embellishing parts of his life story. Hmmm. I'm not really sure how I feel about that. Working off memories, compressing time, re-creating conversations you kinda remember; these are things anyone who writes at length about their own life does. But to trump up events to the point of dishonesty strikes me as more than a little skeevy. After all, a memoir is by definition an personal acount of one's time on Earth. Though I think authors are allowed a certain amount of creative liberty, changing the fundamental facts transforms the chronicle into a work of fiction, albeit one closely based on true events.

So here's the deal: Keep reading my drivel and I promise to stick to the facts. I reserve the right to compress time, mind you - but I hereby vow to adhere to (dare I say it) journalistic standards. Hell, if I could write fiction, I would. At least that's what I plan to tell Larry King's cryogenically frozen head, should I ever get the chance. Hey, that reminds me, did I ever tell you about the time I stumbled onto the zombie farm on the outskirts of High Point? It was a calm autumn evening, I remember the way the moonlight glinted off my steely pectorals as I cut down the brain-eaters with nothing more than a tripod leg and half-dead camera battery. It was about that time the Pod People showed up...
Posted by Lenslinger at 11:26 AM 2 comments:

With Apologies to Bud Light...

Today we salute you Mr. Parabolic Microphone Holder Guy. (REAL AMERICAN HE-ROES!) You show up game after game, sportin' orange, blue and that transparent umbrella thingie. (TRANSPARENT UMBRELLA THI-I-INGIE!) Why? So back home we can hear the spare change rattling in the referee's pocket! (A BUCK FORTY NI-INE!) And when your team scores, you don't let an army of cameras stop you from throwin' up the devil horns and barking out an encouraging "Woo-Woo!" (YOU'RE ON TEE-VEE, DUDE!") So crack open a Bud Light, Mr. Parabolic Microphone Holder Guy, for You Sir know when to capture authentic gridiron sound and when, to represent! (MR. PARABOLIC MICROPHONE HOLDER G-U-U-U-Y!) 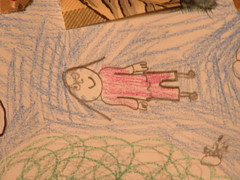 Okay, this IS disturbing. My third grader, a child of considerable charm and immeasurable wit, has expressed an ongoing interest in broadcasting. She's always been enamored with my profession, but lately she's exhibiting symptoms that are causing worried glances between her Mother and I. Just the other day, she peered in the back of my news unit and exclaimed, "WOW! This is cooler than a LIMO!" When I came to, the wife was spraying me down with the waterhose and demanding I remove the pimped-out logo-mobile from our driveway. 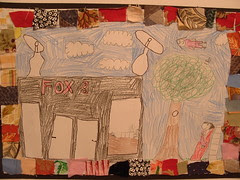 Now THIS. When Hannah told me her latest masterpiece was chosen to hang in the local art museum, I was thrilled and told her so. Then I got a look at said rendering and reconsidered my enthusiasm. Told to draw a picture of herself flying over a place she found interesting, my youngest daughter chose (gulp!), El Ocho. Now don't get me wrong; I'll support her in any honest endeavor she chooses, but in the name of all that's sacred, NOT TEE-VEE NEWS! Luckily, she's very young. There's still time to steer her toward more honorable pursuits, like pharmaceutical sales, real estate or taxidermy. I suppose it's too soon for an intervention...
Posted by Lenslinger at 8:15 PM 6 comments: