CNN's recent bloodletting has the folks at Comedy Central thinkin'... if the Most Trusted Name in News can shit-can their staff and (not) hire a bunch of amateurs, why can't they? Enter South Carolina's cleverest export, Stephen Colbert!


The decaying state of television news doesn't make this clip any less funny, but amid the giggles, Colbert and crew lacerate this business with weapons we have handed them. The revolution may not be televised, but this industry's tailspin will be prodded for jollies all the way to the bottom. See ya there!
Posted by Lenslinger at 8:17 PM 1 comment: 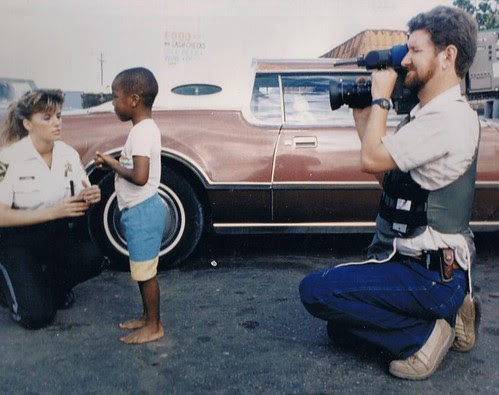 With a name like Porter Versfelt III, he has to be good. So good that fate placed him behind the glass during the very first season of COPS, the show that convinced a generation of lenslingers to ditch their sticks and strap on some running shoes. I was among that number, for nothing felt more natural at the age of twenty three than to chase a bunch of hopped-up constables through subsidized doorways as guys I knew from community college flashed handguns and badges. It's a wonder I didn't get shot. If I ever did, I probably would have blamed that Barbour /Langley production for getting me and the boys so worked up in the first place (not to mention thrusting the shirtless, blubbering felon into the American consciousness). These days, I don't watch a lot of COPS and I avoid the front and back seat of police cars every chance I get. But in the early Nineties, every story I produced ended with somebody walking away in handcuffs. Little did I know back then I was aping the moves of the third Porter Versfelt to roam these fruited plains. Now his own boss down in Atlanta, Mr. Versfelt looks back fondly on his season on the street...


It was fun. And dangerous. That's a bullet-proof vest I was wearing there. I sat in the front seat of the police car. My sound man was in back. The door locked automatically back there (to keep prisoners in) so if I didn't open that door in the heat of the moment when arriving at a crime-in-progress, my sound man was stuck inside. I'd shoot for this kind of show again in a heartbeat. :)

For street cred like that, who wouldn't?
Posted by Lenslinger at 6:50 PM No comments: