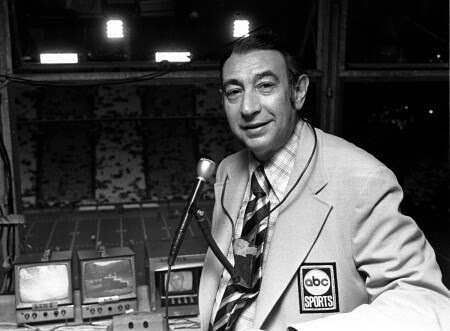 When an ABC Sports executive wanted to spin off Monday Night Football into a Saturday morning animated series, Howard Cosell was said to be livid. "Do you know who you're speaking to? I am the biggest name in show business today. And you want to make a cartoon character out of me?" The irony, of course, is by then that's exactly what Howard Cosell was: a cartoon character. But after reading Mark Ribowsky's withering new biography of the sportscasting legend, I can't help but remember him in all three dimensions. Then again, I'm a child of the Seventies; when Cosell was a bigger pop icon than Justin Timberlake is today. Howard was everywhere: quizzing a glistening Mohammed Ali, enabling a young Joe Namath, lording over such heavyweight fare as Battle of the Network Stars. Yes, the man born Howard William Cohen (in Winston-Salem, no less!) enjoyed a most unlikely career, turning untold hubris and his loquacious nature into a ringside seat to the Twentieth Century.

At 436 pages, Ribowsky's book seeks to cover much of Cosell's rise and fall. Especially the fall. With a subject as repugnant as this, it's understandable ... but in so gleefully depicting every instance of Howard dancing on some enemy's grave, the author commits a little schadenfreude of his own. Still, the book's a ripping good read, if not, like the man at the center of it all, a bit long-winded. I guess that's only fitting, like a custom-made toupee or a mustard yellow ABC Sports-jacket. That's what I'll remember about this American Original. That and the staccato barrage of his trademark nasal tone. Howard Cosell didn't just love language. He molested it. And while that was enough to win my teenage admiration, I've grown to know enough gifted communicators to recognize a few as straight-up assholes. Howie certainly seemed to be that and so much more. But he forged new territory in television and brought the kind of gravitas and grit to sports commentary that Bryant Gumble is still trying to pull off. All while sucking the air out of every room and knocking back lots of vodka.

Hard to hate on that.
Posted by Lenslinger at 8:57 PM 3 comments: 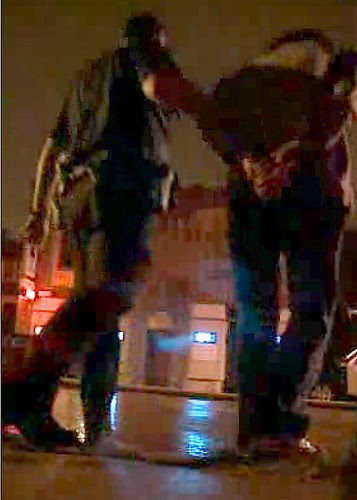 Three months after a Milwaukee police sergeant roughed up the oldest photog he could find at a house fire, city officials have admitted Clint Fillinger did nothing wrong. That is to say they've dropped all charges against the Fox 4 photojournalist. Readers will remember Fillinger as the - ahem - seasoned lenslinger who responded to a house fire call only to be accosted by an oddly hostile cop. "All the way back!" the sergeant barked, as he and a fellow officer walked the accredited photographer away from the news scene. Fillinger protested as he backpedaled, until finally the cops put him on his ass. When they did, his camera took a hard bounce but it did capture the sixty eight year old community menace being unceremoniously cuffed and stuffed.

At the time we issued a stern Schmuck Alert, a move met with stiff indifference by all parties involved. We're cool with that, though one of the core tenets of The Lenslinger Institute is that clashes between The Fourth Estate and first responders would not occur so readily were certain people not so insistent on being absolute douche-bags. It's even written in our by-laws. So, you can imagine our delight at hearing the city of Milwaukee have reconsidered their position and expunged Mr. Fillinger's record of any and all cooked up charges. Hey, being publicly identified as a forty five year old veteran of television news is enough to live down. No one needs a rap sheet they didn't earn. 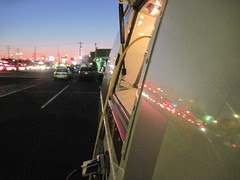 Should ever my life flash before my eyes, have I got to watch all those silly live shots again? And how about those endless minutes between live shots? I'm not sure I can suffer through those extended sentences a second time. Then again, I'm still wearing residue from last night's protracted encampment from the side of the road. Sure, I've washed off all the carbon monoxide and flop sweat, but there's still a groove in my gut from slumping over the steering wheel while my reporter pounded out rejoinders on the world's grittiest laptop... What, like YOU'VE never power-napped as a deadline loomed, never left your body as soundbites danced through your head? Hell, I once found myself floating above the truck only to look down and see the real me molesting an innocent sandbag.

You can imagine my shame.

Or you can keep reading as I try to justify my rancor at having to drop anchor. As a kid, the notion of a protracted encampment in one of these mobile newsrooms would have made me downright giddy, but as a grown man staving off a mid life crisis, nothing makes me feel like I'm wasting my days than some interminable afternoon spent peeling faded logos from the corners of what's left of my critical thinking skills. I'm not saying live trucks make me dumb but the other evening I spent ten full minutes admiring the way I'd coiled an extension cord. If that weren't enough I took real pride at the amount of back-light I milked from a dying street lamp. Add that to the way I convinced that drunk we were breaking down (instead of setting up) and you have the very definition of meaningful remote execution.

And yet it leaves me so empty.

Part of it is, of course, the weather. This time of year it simply gets dark too damn early. That's a big deal when you're trying to make a brick wall interesting, let alone relevant to the earthquake/clam bake you covered seven hours earlier. Of course, I'm just wasting my breath. I know this, just as sure as I know that neglected nine volt battery powering the talent's earpiece will die a sudden death the moment she begins breaking down the deposition. You know, the one they recorded across the street this morning. Look over my reporter's shoulder and you may catch a slice of courthouse window. That, my friends, is the most you can hope for when adding filigree to facts. It won't win you any Emmys but it will put bread on your table if not fill you with quiet pride as some jack-hole with a leaf blower shows up to drown out your shot.

Now back to you.
Posted by Lenslinger at 11:25 PM No comments:

Funny how a single TV camera can turn a bustling post office into a barren wasteland...

Odd how those protestors stop chanting the moment I drive away...

Eerie how a bag full of dead camera batteries can cause an entire freight train to derail...

Scary how much that Black Friday piece resembled the last sixteen I did...

Strange how that kid yelled "Hi Mom!" just before he flipped me off...

Spooky how those people with the golden shovels think this is real life...

Typical how a reporter who phones in every other assignments spends three months crafting his Emmy entries...

Baffling how they set the podium in front of that plate glass window...

Ironic that a woman with so much gravy on her teeth insist on being interviewed...

Weird how unsatisfying writing lists can be...
Posted by Lenslinger at 12:32 AM No comments: 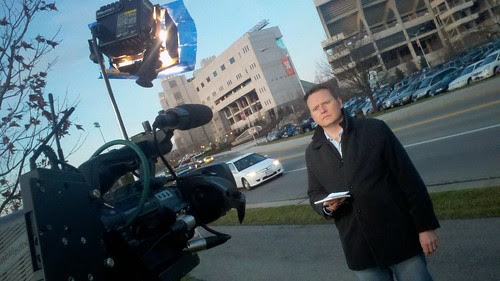 I admit it: when news broke of another shooting at Virginia Tech last week, I promptly dove under my desk. Blacksburg may be a couple hours away but in the Spring of 2007, almost every news crew within this hemisphere made a beeline for the small Virginia town. Even Z-block zealots like myself made the trip, if only to witness one of the largest TV truck summits ever convened. There was, of course, great tragedy at hand - but for the distant affiliates, foreign bureau chiefs and network hotshots who roamed the campus that week, the massacre made but for a backdrop. and what a backdrop... Hundreds of tripods stood at attention as spotlights large and small chased shadows across Blacksburg's darkest day. It was a sight to behold and not for the best of reasons. By the very first nightfall, what began as a madman's fantasy had transformed into a slick and salacious sat-shot juggernaut, a commodity of sorrow served up in every skewed perspective our 24/7 news universe has to offer.

This time, however, the crime at hand did not involve mass casualties. That makes it no less horrific to those involved, but it did prevent the matter from devolving into some kind of hi-def circus. Perhaps no one was more thankful of that fact than El Ocho's own crew, who can be seen above reporting the facts -- withOUT turning aftermath into stagecraft. Me, I'm just sorry the latest shooting had to happen at all. Virginia Tech is a fine school. It no more deserves wanton gun-play on its campus than it does armies of correspondents trying to make their bones over gross and random depravity. As for that massive sat truck encampment on the far side of the school, it was awesome to watch, but it just ain't the kind of thing one wishes on any institution, let alone a campus as bucolic as Virginia Tech. Personally, I don't want to be part of a scum that large unless it's parked under a giant spaceship that just spit out Freddy Mercury.

Maybe then, I'll come out from beneath my desk.
Posted by Lenslinger at 10:07 PM No comments: