"...I see you downtown sometimes. Always on the go." 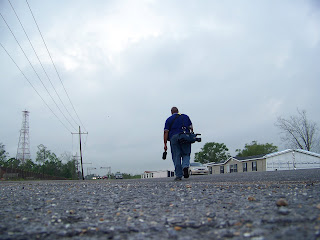 I closed out my friend's e-mail and thought about her last four words. Actually, I only started thinking about it, but then my cell phone rang and I was suddenly late for a ribbon-cutting on the other side of town. Or was it a prostitution round-up? I don't really remember. Nor do I recall exactly how I felt the very first time I took a fancycam out for a day of errands. Chances are I felt important. Logos and lenses will do that to an unschooled rube from the sticks. Since then of course I've pursued my education - but not that fancy book learnin'. No, I've stretched the corners of my mind by dashing from one blind news item to the next. Sometimes, I don't know why I'm rushing to a certain locale until I arrive. Other times, I still don't know why(?) by the time I'm leaving. Not that it matters; as I'm usually due somewhere else - quicker than I can get there...

So what's all this fugacity done to your overly wordy camera-nerd? Hard to say; I have nothing to compare it to. Ever since I flunked out of used car salesman academy, I've churned out groundbreakings and train derailments as if either had a lasting effect on the community at large. Along the way, I learned to stop paying attention. It's not that I don't care about my assignments, but after covering a couple of thousand school board stand-offs/untimely demises, you learn to shove a few extra batteries in your pocket and compartmentalize your emotions. How else is your above-average TV news photog supposed to withstand multiple months of processing newscast fodder? Take it from me, there's no support group for surviving years of county commissioner melodrama ... I've checked. The closest I got was Narcotics Anonymous and they get all jumpy whenever I substitute 'mayoral press conference' for 'overloaded crackpipe'. It ain't like both won't kill your brain-cells.

But there I go again, overstating the implicit, pouring on the hyperbole, re-capping at every juncture. It's just the kind of broadcaster doublespeak that gets me glared at in polite society. Maybe that's why I never get to hobnob with the higher-ups. They're afraid I'll dash in at the last moment, say something scurrilous and take with off with a few pictures and impressions in tow. Come to think of it, that's exactly what I'd do given the choice. I've hurried from one advertised calamity to the next for far too long to know anything but how to shoot and move. No wonder my cocktail party invites all dried up. I'm crass, transitory and swaddled in look-at-me logos. At least I ain't alone. Across this great nation of ours, an army of anonymous photogs wanders the fruited plain in search of the next forty second burst of filler. For proof, check out the musings of The Senator, pictured above. Chances are he'd regale you with the stories behind all those pockmarks on his soul, the kind of thing you pick up from traveling the same road over and over and over again...

Just don't ask him what he shot last Monday. That was like, a whole week ago!
Posted by Lenslinger at 6:32 AM 2 comments: 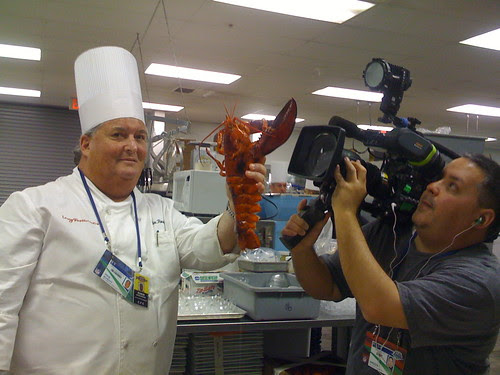 (9:00pm/NBC/TV-14) Wackiness ensues as an anonymous lobster forgoes the boiling pot for a life of spotlights, limousines and groupies. Hologram-or-not Donald Trump bestows earthly riches on a lazy crustacean named 'Gus' in the long-shelved mid-season replacement. Part of NBC's failed "Royality Show" series, Rock(lob)Star! was the first to feature Peacock network cast-offs thrusting the perks of B-List celebrity onto inanimate objects. Unlike the episode where Martha Stewart lionizes a random push-broom, R(l)S! shows initial promise - especially when a feisty chef threatens to broil Trump's comb-over should he liberate just one more crayfish. But the "Royality" concept falls apart quickly, when - after being put up in a posh Manhattan penthouse - Gus fails to fall in love with Bret Michaels. Special guest appearances by Charo, NBC News photographer Dwaine Scott, plus a special performance by the B-52's. (60 Minutes)
Posted by Lenslinger at 6:39 PM 1 comment:

Kicked to the Curb 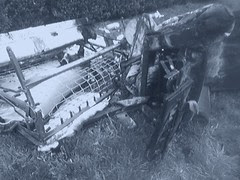 G. Lee knew from the sound of the keys, his window of opportunity was about to close. For even with half his face buried in a upturned eyecup, with a one inch screen taking up his peripheral vision, with a soggy lump of burned furniture shimmering in shades of viewfinder blue, he recognized the sound of maintenance man keys when he heard them. Looking up, he scanned the apartment complex parking lot until he spotted him… a dumpy figure in gray overalls passing by on the far side of the dumpsters, his overloaded key-ring jangling with the swish of every rhythm-free hip. Straightening at the waist, G. Lee locked eyes with the man and nodded in that Southern way - but the man did not reciprocate. He only glared back at the unwelcome photog as he sloughed off to the apartment door marked OFFICE.

Five minutes earlier, G. Lee had pulled into the complex, muted his GPS and thanked the News Gods for his unmarked car. At that exact same moment, a graphic guy back at the station blew latte froth from his oversized goatee and noodled with the words ‘Furniture Fire’. That was the alliteration of everyone’s lips when G. Lee had ambled into the morning meeting. Before he knew it, he was being motioned toward the door as producers babble sentence fragments about a burning sofa, two confused roommates and an unlikely rescue from the unit’s back balcony. “TV Gold!” sputtered one show-stacker as another took deep hits off a crumpled paper bag. Knowing resistance was futile, G. Lee crawled in his car and headed that way, hoping to run rumors through the reality filter before the anchors in his life broke into programming.

He didn’t see a single ‘No Trespassing’ Sign when pulled into the apartment complex, but it didn’t stop his Spidey Sense from tingling. Scanning each passing building for the address he’d been given, he drove deep into the complex before spotting the soot covered sofa in front of a corner unit. Just above it, a second story window hung in shards as evidence of the overnight fire blackened the jagged panes. ‘Yahtzee!’, thought G. Lee as he found a place to park. A minute later, he was outside the car and moving, raising his tripod to eyeball height before sliding the camera on top. Walking his rig over the living room rubble, he powered up, chose a white balance pre-set and began to roll. He’d popped off two medium shots when ’Key-Ring’ strolled by, dead-eyeing him all along the way. One wide shot later, G. Lee heard footfalls heading his way.

That’s when he saw her.

Blonde hair, rounded shoulders, overstuffed nylons packed into a pair of Daisy Duck shoes. The woman only picked up speed as she waddled his way, a retinue of office help and maintenance men behind her. G. Lee smiled weakly at her, but she only dug deeper into the asphalt as she walked within ear shot. G. Lee couldn’t help but notice the lady has both fists balled up, so he reached over to his camera and ever so casually zoomed out. ‘Shot number 4’ he thought as he made sure the red tally light was switched off.

“Pack it up, Chief, I had about enough of ya’ll last night!” Angry red blotches ran up the lady’s neck as G. Lee watched her breathe solely through his nose.

“What’s the problem?”, he asked - stalling for time.

“Problem is, you’re on our property” she barked. “Last night I didn’t have much choice, but the fire department’s gone, the Po-leece are gone and you’re about to be gone!”

G. Lee looked past the lady to her posse there on the pavement. A nervous looking young woman stood just behind her, fondling an iPhone just in case the cameraman went nuts and authorities were needed. To her right, Key-Ring stood beside a younger, skinnier version of himself.

“You know, I don’t even think we were here last night. You have a big crowd?” Before the lady could answer, G. Lee reached over and tried to act casual as he adjusted his camera’s shot. ‘Number 5’ he thought.

“We had too damn many of you if that’s what you’re askin’. Ya’ll got a lot of nerve bargin’ onto private property.” The lady’s breathing had slowed a bit but she still looked like she wanted to deck him.

With the flick of a wrist, G. Lee tilted his lens up at the soot-covered balcony ledge. ‘Number 6‘. Fighting the urge to glance over at the viewfinder, he looked at the lady and gave her his best Gomer Pyle.

“Yeah, we never know when we’re invited and when we’re not”, he said. “I guess we ask forgiveness instead of permission”

“Well you’re permitted to leave”, she spat. “I ain’t got time for all this.”

With the lady’s neck blotches still spreading and Key-Ring diggin’ in his overall pockets or a weapon or snot-rag, G. Lee relented and took his fancycam off the tripod. Turning toward his news car, he heard the four of them fall in line behind him as he fiddled with the camera’s controls. When he reached his car’s tailgate, he set the camera on the ground, lens pointed toward the building with the burned furniture in front. Fumbling with his keys as the tape inside his camera rolled G. Lee asked his four hosts the only question he could think of.

“Ya’ll know a good place to eat around here?”, as 'Number 7' crossed his mind.

With that, G. Lee knew the gig was up and as he picked his camera off the ground, he finally stopped the tape from rolling before he placed his axe beneath the hatchback. Only then did the lady and staff relax, but they barely budged as G. Lee brushed past them to crawl inside his car. Cranking it up and dropping the transmission into Reverse, he slowly backed out while rolling down his window.

“Would you do me a favor?” he asked the lady as she tried to stared sourly at him..

“Chase off any other crew before they get through the gate. That way this place won’t end up on the news…”

He drove away before she could answer.
Posted by Lenslinger at 9:46 PM 4 comments: 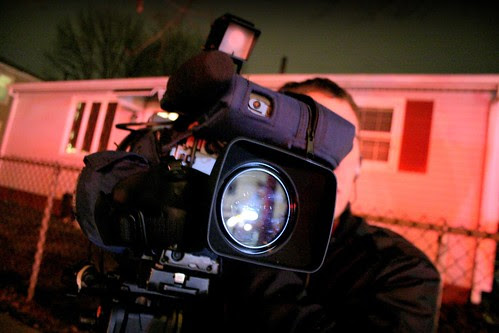 Move over, beFrank! Catch a cab, Busse! There's a new shutterbug on the scene and his name adorns grape juice bottles the world over. Actually, I'm not sure Corey Welch gets one thin dime from that jug of Pineapple Orange Apple Cocktail in your fridge, so stop askin'! From all that I can tell, he's a mild-mannered freelance photog out of Rhode Island who's also handy with the stills. Along with his younger brother Ryan, he bags snapshots that trigger flashbacks in this overly wordy camera-nerd. Take the above shot for example, a single frame that floods my frontal lobe with untold memories of late night shootings, inner city stand-offs and the finest in unexpected structure smoke... Yes, with mad camera skills like this, is it any wonder they gave up squeezin' grapes for more honest work?
Posted by Lenslinger at 9:39 PM 2 comments: