I don't know what bothers me more, the toxic sheen of that truck's dish, Clark Kent's action-slacks or the fact that the robot humping that poor photog was once referred to as a MINI-cam. Mini-fridge maybe ... I've seen moon suits with fewer accoutrements. Sure it was emerging techology at the time, but there's nothing revolutionary about a hernia draped in coax cable and polyester. It makes me wonder what all those old film guys thought when their sleek little handheld cams were replaced with heavy jetpacks that woudn't fly. Slather the whole thing in old school logos and you have all the ingredients of a gimped-up renaissance. No wonder so many fled for higher ground. Me, I'm just glad I came of broadcast age when I did - for even the old school gear I schlepped the first few years can't beat the bulk of said get-up. Why, it's all enough to make this increasingly crotchety cameraman to stop bitchin' about his back. Almost.
Posted by Lenslinger at 8:17 PM 5 comments: 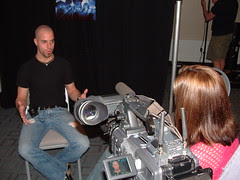 When I first predicted local boy Chris Daughtry was about to go GLOBAL, I only half believed it. Sure, the dude had blistering pipes, a brooding presence and a shaved head for the ages, but GLOBAL? Stark hyperbole. Now however, three short years after he met Shannon Smith and I for a pre-Idol interview, he seems to have done just that. This is not a news flash, I know - but every once in a while I have to rub my eyes and ask myself, “Did that really happen?”. Did a Honda dealership employee really sidestep the suck-fest that is American Idol, crank out a jillion selling debut CD and become a household name? The answer, my friend ain’t blowin’ in the wind. When Brad Pitt introduces you and your eponymous combo as the biggest rock and roll band of last year, you've come seriously close to having arrived.

I just wish I’d been more keen on the uptake. By the time Chris belted out a Joe Cocker tune in that Greensboro parking lot, I'd pointed my camera at hundreds of nutbags claiming to be the next American Idol. "Damn,"this dude can wail," I thought. "Wonder where he got those wraparound shades?" Had I known then that not only would he survive the Idol audition, but go on to becoem a Rock Star with a capitol R, I’d have hit him up for a job as his personal videographer. Instead, I covered his meteoric rise through the Idol sweat shop process and enjoyed our little chats. No doubt the guy had recordable pipes, but would a turbo-throat and simmering presence cut through the Idol schmaltz and secure him a place in the pop music pantheon? Apparently so. Twice now I’ve turned off my vacuum cleaner to see him take the number one spot on VH1’s Top Twenty Video Countdown. Make that happen enough and you've earned your place in pop culture. Not bad for a guy who used to keep track of other people's oil changes.

These days, Daughtry's CD is still selling well. It damn sure grew on me and I hate me some damn Nickelback. Regardless of what this photog think's, Chris's freshman platter ensures he’ll never have to write up another service order on a 1993 Accord with dirty ashtrays. He’ll be touring the world, when he’s not layin' low in his palatial home a scant dozen miles from my own humble abode. For all I know he watches my stories on the local news, when he's not trippin the glove with Bon Jovi. Me, I’m still shooting ribbon-cuttings, but I’d be lying if I didn’t admit I get a kick out of his career. No, I don’t want to BE him. I can’t carry a tune in a pre-approved container and I’d look pretty silly in one of those knit skull caps, but I’d damn sure like his Rolodex. As for Daughtry’s future, it’s still uncertain. His next CD will reportedly be harder-edged, something I’d probably like more than his largely female fan base. Whatever he puts out however, I’ll be listening, for it’s not everyday you help launch some cat into the stratosphere.

Not legally, anyway.
Posted by Lenslinger at 11:14 PM 3 comments: 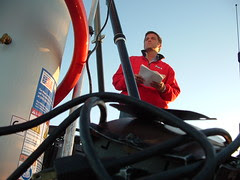 Though it sucks the breath from my lungs to verbalize it, I figure I got twenty years or so left in this business. But I’m beginning to think the business may not have twenty years left in it. Sure, they’ll always be some form of corporate media; most folk are too lazy to go get it for themselves, no how many blithering Twitters and hopped-up blogs claim otherwise. But TV News as we know it today? It won’t survive the next two decades. Hell, it might not be recognizable twenty four months from now. Don’t believe me? Pick up on Line 4. It’s Katie Couric. She’s got fantastic gams, a 16 million dollar paycheck and damn few viewers to show for it. My bride was right: she should have stuck to the morning shift where at least she could hang out with the artist formerly known as Al Roker.

Now word comes down that her employer CBS - the house that Edward R. Murrow built - is collapsing onto itself. In the past couple of weeks, they lopped off top talent from both sides of the screen in a n affiliate blood-letting heretofore unseen in the Fourth Estate. Now words comes down that the empire once known as the Tiffany Network is considering farming out some of its newsgathering operation to Chicken Noodle News. It may sound like so much inside baseball to those outside the biz, but just know what was deemed unthinkable just a year ago is quickly coming to pass. So how will that affect your not so humble lenslinger? I’m glad you didn’t ask…

‘Cause I don’t really know. Despite what the pungent hippies at Guilford College scream when I roll up on campus in a live truck draped in F-words, local affiliates and their networks are vastly different entities. Yeah, I work for a FOX station, but I’ve yet to see Bill O Reilly cruise through my newsroom. If he did, I’d pick up that loofah that he dropped and maybe ask for a snapshot- for he and I are not long fro this world. TV News, for all its gloss and foibles, is about to morph into a new form of communication. Whether it will rid itself of all that vaudeville or simply find a new platform to pedal its shtick is still unknown. The only thing you can be sure of is the newscast of tomorrow wont look like Today, or World News Tonight or any of that pablum that passes for modern broadcasting.

I just wish I was more upset. Don’t get me wrong; I hate it for all those cross-town colleagues who’ve gotten the axe and my crusty photog heart goes out for all those who are about to. But dammit, it’s long overdue. We in TV have chortled, hyped and adored ourselves into oblivion. What used to pass for the voice of God now sounds like so much sorority house blather. Bloated and gloating, there’s not been an industry so ripe for revolution since Kodak dismissed digital cameras as just some passing fad. Just what new form TV News will take isn’t even privy to those above my pay grade (which makes up just about everyone). But believe me when I tell you this: For the first time EVER, it is safer to be a lowly photog who likes to multitask than a toothy news bunny who only knows how to twinkle on cue…

Until the robots arrive, anyway.
Posted by Lenslinger at 11:09 PM 2 comments:

It’s Monday night and, besides plowing through Neil Young’s exhaustive biography, I ain’t doin’ a whole lot. But in six short days, all signs of stagnation will evaporate as The Mighty Weave and I touch down in sunny Las Vegas. No, we’re not going to count cards under the tutelage of Kevin Spacey (based on a great book, by the way); we’re gonna rip the lid off NAB! What’s that you say? Only the world’s largest electronic media show - an annual gathering of more than 100 thousand broadcasters that overtake the neon blight of the Vegas strip every April. It’s been twenty four months since Team Slinger tripped the showroom floor and with the jet lag from that red eye finally wearing off, it’s high time to do it again. This year however it won’t just be us country bumpkins on the prowl, for the one and only Rick Portier of Turd Polisher infamy is bringing his sequined jumpsuit along for more than a little photog karaoke. If that weren’t enough, we’ll be rubbing sore shoulders with our lenslinging brethren at the Harley-Davidson café as the lovely and gracious Kevin Johnson leads us all in quiet reflection at the B-Roll Bash. So what’s in it for you? Eh…perhaps we’ll shoot a few videos, take some pictures, gather analysis or just up-chuck on a cactus. Either way, we’ll do our best to represent, all while keeping our fifteen collective readers in mind. No promises, though! After all, what happens in Vegas ... quickly becomes a tired cliché. Just sayin’.
Posted by Lenslinger at 7:05 PM 4 comments: