Lens of the Lost 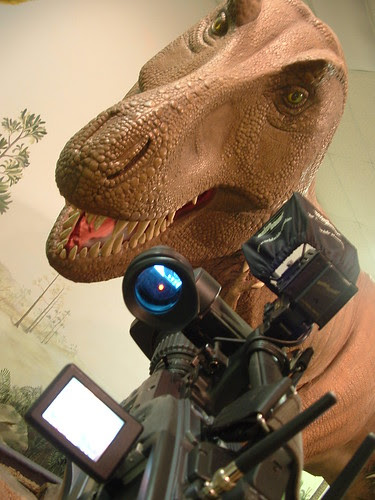 Ever have that dream...where you're at work minding your own business and suddenly everything gets all tripadelic? You know, the one where you're sucked down some cardboard time portal and you spend the rest of the night chasing Sleestax politicans across cheesy mid-70's dreamscapes - until eventually you wake-up in the hallway closet with the wife standing over you? Yeah, me neither.
Posted by Lenslinger at 6:48 PM 4 comments:

Via the all too absent eWink, news of a little elbow fiesta by the bay. It happened yesterday at San Francisco's Golden Gate, where local police denied anti-war demonstrators permission to march across the bridge in protest. ABC7 News photog Randy Davis reportedly asked to be allowed past the crowd (to shoot video) cops informed him that the world famous Golden Gate Bridge was indeed, 'private property'(news to an awful lot of taxpayers). Instead of correcting the officer however, Davis brazeny shouldered his axe - an audacious move that prompted the nearest bridge cop to immediately grab his lens. Perhaps instinctively, Davis removed said beefy law-enforcer mitt and it was then the real pushee-pushee began.

Hey, I wasn't there (I was loitering in a swamped-out church basement, remember?), but I have been in similiar situations. Rabid protestors, hyped-up PO-lice, pushy news crews - it's a recipe for Rodney King 101 and a living diorama of how I don't want to spend my day. While the bridge cop in question was needlessly aggressive, Davis was equally ballsy in breaking that highly unauthorized grip. I much prefer to act like a stabbing victim whenever someone grabs my lens, drop to the pavement as if I'm suddenly boneless and shriek uncontrollably until someone either cuts me a check or at the very least drags me out of the melee in question. But hey, I'm a lover - not a fighter. Tito, get me a tissue!

((Photo hotlinked from SFGate.com, whatever that means...))
Posted by Lenslinger at 7:35 PM 6 comments: 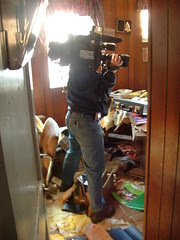 I was traipsing through the wreckage a church’s flooded basement today, when I sensed the presence of a competitor. This was no ‘disturbance in the force’ mind you - just a gnawing, knowing sense that predators were on the horizon. Call it photog intuition. I’m calling it Tuesday. Anyway, not wanting to let alarm my prey, I kept quiet, picking my way past the muddy hot dog buns and overturned card-tables as the church deacon pointed out a stack of hymnals caked in brown dirty goop. Happy to be hunting in such a target rich environment, I wrestle my tripod into a suitable squat and opened up the camera’s iris. When it rains it pours, I thought. I was grimacing at the pun, when I heard it - the tell-tale crunch of a white Ford Explorer’s muddy tires on the gravel driveway outside. Knowing the sound of a news unit on final approach, I urged my kindly host to go ahead and show me the pastor’s study.

There was little need to be hasty. The stagnant flotsam of Mount Carmel Baptist Church’s basement space boasted enough indelible images for a dozen news crews. Having already had twenty pristine minutes to poke about the carcass on my own, I would have been mad to expect my canvas wouldn’t soon become crowded. So I kept moving, bagging shot after shot of broken news frozen: the shoulder-high water line on the Sunday School door, a brand new TV lying face-down in the muck, the bloated funk of a ruined food bank…images unavailable at the County Commissioners meeting. No, to wish denial of such a prize on any working crew is strictly bush league and simply not how I roll. Thanking the deacon for his time and access, I took back my wireless microphone and informed him my doppelgangers were at the door.

In the end, it was no rival Highlander crossing the church’s threshold - no fallen Jedi duo come to acrobatic battle. Rather, it was a crew from WDBJ in nearby Lynchburg, working their own deadline and wondering what the Greensboro guy was doing in Danville. Not bothering to explain, I gathered my tools and smiled benignly as a tall stranger with a broadcaster’s booming voice poked his over-combed head into the basement and bellowed a hello. Behind him the silhouette of a female photojournalist hove into view, her piercing white on-camera light announcing the arrival of yet another news crew. “Show ‘em the pastor’s study” , I said before leaving the deacon standing there in the muck. As he welcomed his new visitors in for a spell, I fished out my digital camera and documented my retreat. Popping off a few shots of photojournalist Andrea DiRocco at work, I stopped just before she thought to ask what the hell I was doing.

I'n not sure how I would have answered her...
Posted by Lenslinger at 9:31 PM No comments:

I kicked off 2007 like most of you probably did - huddling with parole officers as they slapped a GPS ankle bracelet on a convicted sex offender. Okay, so its no New Year’s Day tradition, but when its your job to fill the space between newscast commercials, you never know what you may point your fancy-cam at. Today it’s registered sex offenders, tomorrow it may very well be Mayor McCheese. Either way, I get paid the same - be my target of the day a lovable mascot or an object of justifiable scorn. That said, bring on the pervs!

Okay, so there was just one of them - a red-eyed twenty-something in baggy jeans and considerable bling. He couldn’t have been too happy to begin the new year with a visit to his parole officer. Seeing me and my camera sharing donuts with the guys in shoulder-holsters had to really suck. Luckily, his feelings didn’t matter one iota, and as he slunk into a small office bathed in ugly fluorescent light, he seemed to know it. Plopping down in a plastic chair, he barely cut me a glare as his parole officer informed him his fifteen minutes of fame was about to begin.

Actually, we were pretty easy on the slouching young cat with the thousand yard stare. Not once during the whole time I loomed over him with my heavily-logo’d lens did I ever point it at his face. His hands, elbows, ankle and neck I documented in great detail, but his face - never! Why not? We didn’t need to. Varner and I could just as easily tell the story of the new state law requiring select sex offenders to wear Global Positioning Satellite tracking devices withOUT subjecting this newly convicted felon to the taunts and derision of his fellow man. It’s all a part of the TV photog’s journalistic creed: frame everyone the same...let any judgments and all aspersions be cast by the lens.

That’s why I didn’t splay his face across the region. I’m there to video, not to vilify. Even if the sick little worm did deserve it.
Posted by Lenslinger at 10:19 PM No comments: 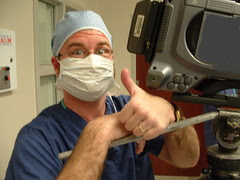 I've no top ten lists, no words of wisdom, no parting shots at 2006 - just a big, hairy Happy New Years to you and yours. The past twelve months have not signaled my meteoric rise to literary superstardom but they have seen me sit down and write almost every day. Thus, I'm considering the past twelve calendar pages more than a crumpled mass of scribbled grids - I'm officially deeming it a success. Of course I couldn't do that without thanking you - the returning reader who's suffered through my every other screed, from my misguided series of mullet pictures to my attempts at media analysis, from my often bloated prose to my every instance of outright adjective abuse. Thanks - that couldn't have been easier for you. As for what you can expect in 2007, well - I think I pretty much listed it. That, and a few vlogs - granted Weaver will show me how to push all the right buttons on my new Sony.

Every Soul a Stringer

I guess its no surprise that Saddam’s snuff film ricocheted across the web before the former dictator’s remains were ever stuffed in a box. It would only have been alarming had someone not thrust a cell phone forward and hit ’RECORD’, not uploaded it to the globe via YouTube, instantly enabling heretic and housewife alike to witness Hussein’s short drop into the past-tense. No, most weekend newscast producers were counting on the footage to lead their shows before ever the deposed overlord was ever served his last incarcerated meal - and not because they’d stationed news crews underneath the gallows. Who has to?-when all the world’s your stringer. ‘Stringer‘, you say?

“That squirrelly dude talking to the cop, the one with the camcorder and the home-made logos. His name’s Gordo and he’s got more scanners than you. He’ll beat you to a lot of scenes ‘cause he sleeps in his car. He’s also a preacher. Don’t ask...”

Hmm? Sorry - just flashing back to the day I first learned the term. At the dawn of the 90’s, ‘Stringer’ meant freelance journalist (though ‘ambulance chasing drifter’ could sometimes apply), one who responds to breaking news, shoots home video and peddles it to local TV stations for all the cash and glory that be squeezed from two minutes of shaky, strobe-lit carnage. I’m being too harsh, though. Fact is, more than a few freelance cameras have prevented producers from calling me at four a.m. ‘cause the freight train ran into the mental hospital’. For that I’d like to thank each and every one of them. Just give me the number to that Waffle House by the interstate and I’ll get started.

But I digress. What I really came to fathom at was the speed at which news travels these days - and the footage of Saddam-a-swingin’ was news. Just ask the millions of people with broadband in their dens - the same folk who own a cell phone and a Tivo or two. They are the new ‘stringers’ - a citizenry bristling with newsgathering tools, a global populace smitten with those blinking gadgets on their hips. As these incredible tools (the machines, not the people) shrink and extrapolate, expect more of the same. Whenever a plane plummets, a governor gropes or a dictator swings - increasingly clear phone-footage will emerge, long before the talking heads finish putting on the pancake. Where that leaves an over-seasoned cameraman is still out of frame, but I can‘t help but feel like the photog’s role is diminished a bit. After all, what good is a fancy-cam and a sense of entitlement when Joe Dirt’s packin’ a tricorder? I should’ve gone into waterbed sales. Those guys still got a corner on their market...
Posted by Lenslinger at 7:19 PM 2 comments: