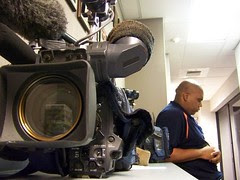 Downtime. Different photogs handle it different ways. Some use the idle spots in their day to brush up on new editing techniques. Others giggle at shadow puppets in the breakroom. Some cruise bad neighborhoods in hopes spot news will erupt. Others make like those crooked cops in Serpico and nap in their cars. Some pour over list of emergency services ten-codes. Others pour over interns. Me - I usually avoid downtime altogether by working sans reporter. That way, I'm never burdened with having to come up with new knock-knock jokes for the fellas; I'm too busy writing my story of the day (along with a fair amount of web-surfing). Don't get me wrong, there's nothing wrong with cooling your heels while the reporter does all the heavy mental lifting. But I fear it's a dying artform...

...for the crew of tomorrow will most likely be an army of one. And armies of one experience very little rest and relaxation. VJ, Mo-Jo, One-Man-Band: you can call them human colostomy bags, but it doesn't change the fact that a myriad of forces is taking the 'crew' out of news crew. Don't believe me? You must not read much. Otherwise you'd know that markets large and small are embracing the solo-newsgatherer model like never before. But it's not because doing so will improve the product. It's for a far more important reason: MONEY. I don't know if you've heard, but the U.S. economy is in some kind of apocalyptic free-fall. Cars aren't selling, dealerships aren't advertising and as a result you average newscast is sporting a lot more look-at-me promos than honest to God paid-for spots. It's an oversimpified way of looking at it, but it does explain why the boss keeps talking about spontaneous vacations, don't it?

Of course you don't need this silly site to know the world is changing. But I'd be remiss in my duties as self-appointed pundit if I didn't mention one facet of these alterations: they're permanent. Sure, your company may one day reinstate their 401 K plan and I'm sure raises will one day return. But if you think for one skinny minute that newsrooms are going to learn how to do more with less, only to revert back to the tried and true ways of the good ole days, well then I'd further assure the video only looks blue in this particular monitor. So, what have we learned? A) The drama queens and A/V geeks of paradigms past are morphing into one multi-tasking, fairly sweaty individual. B) The resulting television will initially be as ugly as that pet primate who 'went chimp' on that poor lady and C) for once, looks don't matter. All that really matters is that your magnanimous affiliate keeps the juice turned on. Everything else is the equivalent of bathtub farts.

Now, make like The Senator pictured above and get some rest. We're all going to need it.
Posted by Lenslinger at 10:52 PM 2 comments:

Rolling to the End

Much love to Amanda Emily for turning me on to the life of this legendary lenslinger.

Neil Davis did what every news shooter at one time or another thought about: filmed his own death. But this Australian combat photographer had no deathwish. He did, however, feel most alive when documenting peril. The only cameraman to film North Vietnamese tanks as they crashed through the gates of the Presidential palace in Saigon, Davis had a well-earned reputation as a man who would hunker down and roll when others would up and run. This fearless verve kept hin in good standing with his NBC suits. They readily bought his footage as he covered combat on three different continents. But Davis was more than a mere photog; he was a Journalist with a capitol J, a poetic soul who every day wrote the following in his diary:

In 1985 that glorious life came to a violent end when Davis was killed by tank fire during a Thai coup attempt. He was less than fifty meters from the tank that killed him, and rolling to the end. And we stateside shooters complain when our batteries turn up missing...
Posted by Lenslinger at 8:09 AM 6 comments:

"Dude, when you gonna update your blog?" asked Satellite Dan. "It's getting kinda stale."

"I dunno," I half-muttered. "I'm thinkin' about shutting it down."

Danny's right. I'd no more deactivate this site than I would rip my chin whiskers out one by one. Lately though, this place has been a tad troublesome. A recent browser upgrade has made it harder to log in to Blogger (without first commandeering my 14 year old's laptop. You ever tried to cut a teenager's instant messaging session short? For a straight A student, that girl sure can swing a shiv). Mostly though, I've simply lacked the mojo to look around my skull and describe what I see. Blame the good books I've been reading, the TV shows I don't watch, the amount of hair that sticks to the brush each morning. Whatever the cause, I've no more control over my output than Joaquin Phoenix has over his own runaway beard. Nearly five years into the blog, I know this to be true. Whereas I use to suffer over keeping up the pace, I'm now learning to let it flow when it will and not worry too much when it won't. Understand, we writer types are famously self-involved. Since I can't afford to lock myself in some chamber and marvel at my fingernails, I occasionally have to push back from the beloved keyboard, stand up and shake it off. Oh, and once in a while I hafta talk about eighty-sixing the entire site. I don't really mean it, but having a reader (and a friend) act like he's gonna jump up and crack me in the jaw if I mention it again, always clears my head. 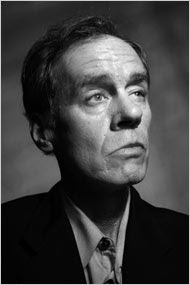 At its best, the junkie memoir is a specious thing. The transcription of bad behavior, forays into self-aggrandizement, a story arc straight out of 'Behind the Music'; it's a thoroughly skeevy endeavor. Worse yet, weave in a bit of embellishment and you got enough troubles to fill an episode of Oprah. Just ask James Frey. Yes, one of the few things less admirable than wallowing in drug-fueled squalor is trying to turn it into opium for the masses. All of which fails to explain why David Carr's life story is such a treasure. When the New York Times columnist set out to document his trip to oblivion and back, he couldn't differentiate between memory and self-protective myth. So he did what any good reporter would do: he began asking questions.

And not just of anyone. Carr tracked down old running buddies, cornered ex-drug dealers, quizzed the women he hit. The resulting tome is no fairy tale. In The Night of the Gun, Carr follows his regrettable trajectory: from good time party boy to full-on psycho. Before successfully completing rehab (on his fifth attempt), he finds himself, a bloated, deranged drug addict who harangued his friends, beat his lover and ignored the well-being of his prematurely born twins for the open lure of a freshly-packed crackpipe. It ain't pretty, but Carr's insistence on 'keeping it real' renders his personal history worthy of redemption. Mostly though, it's a beautifully written confessional by a man unafraid to own up to his oh so sordid past. His chapter detailing the day (and the way) he finally hit rock-bottom is so achingly accurate, so potently told, so totally devoid of froth and glory, it should be taught in schools. A+
Posted by Lenslinger at 12:07 AM No comments:

Fire in the Sky 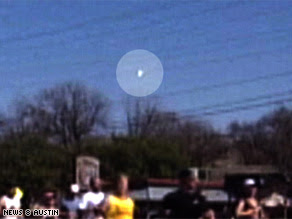 What DID Eddie Garcia capture with his fancycam? The News 8 Austin videographer was covering a marathon on Sunday when he noticed a - AHEM - fireball in the sky. Ever the professional, he pointed UP and recorded a mysterious image hundreds of other Texans reported seeing. Was it debris from crashing satellites? An optical illusion caused by too many water bottles? The lead starcraft of an alien race bent on our very destruction? Hard to say, but when a TV station photog is quoted in an AP article, worlds are already colliding.

Actually, news photographers - both moving and still - would be excellent emisarries should a higher lifeform decide to come a slummin'. Think about it: We know where all the city leaders hang out, tend to travel with assorted foodstuffs and know how to handle individuals with very large heads. I know if I were looking to conquer a distant civilization, I'd snatch a few good tour guides first. You know, some local handler who knew the streets but didn't really care for his neighbors too much, some schlub who drove around with extra clothes who could point out a greasy spoon or two, a creature with an all-access pass who wouldn't be missed too much if he got sucked into some giant spacecraft's underbelly...

Ya know, I think I may have the makings of a pretty awful Made for TV Movie on my hands here...Any title ideas?

Morose Encounters of the Third Kind?

Bueller? Anybody?
Posted by Lenslinger at 9:43 PM No comments: