The Frigid and the Hidden 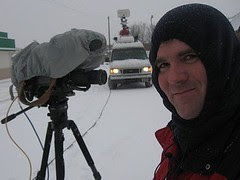 Is it wrong I ran for cover when Mother Nature took a dump? It's a question that's vexed me all weekend as I laid by the fireplace watching SpongeBob SquarePants. Outside, countless colleagues scrambled onto the sudden tundra of a fresh snowfall; stringing cable across parking lots, pointing dishes into falling sleet, sticking lenses into motorists' frozen grills. 'Should I be out there among them?', I wondered as I switched from a stout and stammering starfish to a bundled coworker yammering on about salt trucks... Did I flee from the action as the front lines formed? Did I doff my very logo as others layered up? Did I skulk off knowingly as bolder souls threw themselves on ticking snowballs? Yes. No! Yes. More than anything I just went home for the weekend, a reasonable enough maneuver after navigating five days of deadlines. But as I prepared to leave work Friday, it was hard not to notice the invasion force forming around me. Talkers, shooters, stackers and techs - all bustling about in shimmering winter gear. Heck, I saw one guy who never leaves the building sheathed in neoprene! I'd have talked to him to, but I was too busy crawling on my belly toward the door.

Not Weaver. He loaded up in a live truck and decamped to Thomasville. Saturday morning he arose mid-blizzard and steered that lurching stagecoach into the teeth of the storm. What followed was three hours of staggered remotes - shot, produced and starring one burly photog. And it wasn't just the Mighty Weave. A county away, Roy's Folk impresario David Weatherly turned a camera on himself and threatened to lick a lightpole if people didn't heed the advice he himself scoffed at: Stay off the Streets. Sure, we also had other two-person crews filing live reports from elsewhere, but for my lack of input, the most compelling content came from the two shooters operating sand assistance. Perhaps it was the lack of polish. Maybe it was the way Weaver interviewed the two Biscuitville chicks who brought him food, (thus exposing a snow coverage tradition: setting up live shots near fast food restaurants. Cowinky-dink?) It could have been that crazy redneck who slung a few intentional nasties in front of Weatherly's camera - before we abruptly cut away ---

Look at me saying "WE". Fact of the matter is I was decimating a box of Honeycombs with my offspring while El Ocho soldiers were surviving on generator fumes, snow cream and acres of face time. I don't expect my extended friends and family to understand what I've done exactly but I want you all to know that the guilt I feel from my desertion will live with me for many, many years to come ... or at least until my phone rings in the middle of the night and I alone am sent alone to check out the sludge spill at the Wastewater Treatment Plant.

All eyes may have been on President Obama during his State of the Union speech last night, but deep within the bowels of the Capitol, one Wesley Barrett was leafing through some reading material. Actually, the former El Ocho photog was boning up on some classwork as the President droned on/enthralled the masses (depending on your politics). Speaking of politics, I always knew it was one of Wes' passions. What I didn't know is he would one day flee the Piedmont for D.C. , where he regularly bumps fists with the leaders of the free world. Not bad for a guy who once spent an entire week trapped in an Oklahoma dorm room with your surly neighborhood lenslinger. That and a memorable appearance on this very blog could have limited this former farm boy to a life of medium market melancholy. Instead he and his lovely wife made their way to Washington, where the many monuments, nut-jobs and sat shots keep this die-hard N.C. State fan constantly hoppin'. That is, when he's not highlighting his syllabus...

Some International Man of Mystery.
Posted by Lenslinger at 9:44 PM 1 comment: 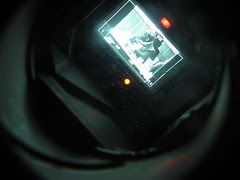 You know what they say: It's hard to look ahead when there's a tiny TV screen stuck to half your face. Okay, so no one says that - but they would if TV news photographers ruled the world. Until then, I'm happy to spotlight their plight, for you'll not find a group of people more wary, verbose or wise than the good people standing under your favorite station's fancycam. Sure, we put the talking hair-do's on the billboard, but that's only because we wouldn't want to disrupt traffic with a giant A/V geek in a fishing vest straddling the interstate. Besides, it's not what a lenslinger looks like that's important, but what he (or she) looks at...

Me. I've looked at a lot over the past twenty years - very little of it by my own volition. Rather, I've been dispatched with great haste to scenes both calculated and haphazard. Mayoral meltdown, kindergarten cook-off, spontaneous pothole...I've rolled up on 'em all and been invited to stay - not because I'm so much damn fun to be around - but because I packed my looking glass. You know, the one glistening in familiar logos, the ones roust you from your morning slumber with cheery chit-chat and lulls you to sleep each night with Seinfeld reruns. Be it the good will engendered by all that programming or the fact people just like the cut of your anchors jib, most folk will welcome the sudden appearance of a TV news cameraman - provided you don't get in the paramedics' way or knock over some six year old Sous-chef as she tweaks her Creme Brulee. Don't roll your eyes: that very scenario could play out before lunch - then who's gonna be crying into their Happy Meal?

Not me. I'll have my eyes on the prize: that shimmering blue postage stamp floating in the not so distance. Stare at it long enough and you'll swear you've see it ALL - even if you've only witnessed ten commissioner tempests and a half dozen house fires. But steady exposure to a live viewfinder won't just shorten your attention span. It'll throw your focus out of whack, transmit the pangs of a stevedore down your right side and dare I say make you a little meaner. Yes, I was kinder and gentler before I stared down life through a tube every day. Just ask the wife. But if I was softer back then it's because I was so naive. That'll happen when you ride a desk around a cubicle farm, reciting lines from The Office as if it were sacred text. Me, I'll be out jabbing glass at something salacious, sublime or even sticky - all while swearing the secrets of the universe can be found in the very next close-up...

Just don't ask me to learn the phone system. A photog's got to know his limitations...
Posted by Lenslinger at 11:55 PM 1 comment: 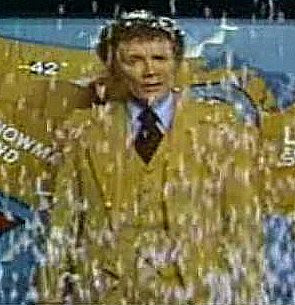 I first met Frank Deal in his living room, years after he stopped appearing in Piedmont dens every weeknight. Neill McNeill and I were producing a series of 'Where Are They Now" pieces on WGHP personalities and the former weatherman reluctantly welcomed us into his home. I had not grown up watching Frank Deal, but by the time I set up lights and a camera in his front room, I'd seen enough archive tape to know I'd entered the crib of a master broadcaster. But he was so much more! A card-carrying member of local television's golden age, Deal did it all: emceeing shows, interviewing notables, hosting puppet shows, helming the felt board that for many years was all the 'Weather Center' a medium market TV station like El Ocho needed. It was there, amid the stick-on clouds and paper mache snowflakes that Frank Deal truly distinguished himself.

Known as much for his endless torrent of corny jokes as his prognostication, Deal approached local TV with a comedic lilt and the heft of a thespian. Viewing his many highlights is akin to watching a gifted athlete run circles around his teammates. That his nightly groaners were the product of a paid joke service is testament to his dedication to the craft of communication. Not that he needed the help! Even if his humor was more your Grandmother's speed, there was no denying Frank Deal was intrinsically funny. Whether he was miming his way through a silent forecast or laying a little ham-bone on the extended outlook, dude had timing, style and chops. Which is why I was so surprised the elder Mr. Deal to be shy and thoughtful; eager to please, but reticent to gloat over his impressive legacy. I don't remember everything we covered that evening, but I do recall Frank lamenting local TV's fascination with gadgets. Clearly, he'd rather connect with the viewer through human warmth than shock and awe them with the latest cold technology. I was surprised to catch myself nodding in agreement...

Frank Deal died this morning at the age of 84. For 27 years he was the erudite Clown Prince of the Piedmont's evening airwaves. Upon retirement he threw himself into helping his church and community. Though our contact was sporadic, I'm grateful and proud that I shared air with Mr. Deal, for his generation forged a new way to communicate. Not only that, they did so with integrity, verve and - in Frank Deal's case - a mischievous twinkle that let you know that it was okay to laugh at the nightly news. Sure beats some pseudo-scientist shouting from atop his Doppler...
Posted by Lenslinger at 9:30 PM 2 comments: