And We LIKED IT That Way! 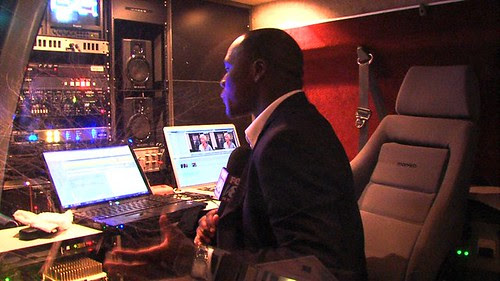 You there, jabbering into the laptop. Nice suit. Hey, did I ever tell you how we used to put together TV in the field? It’s crazy now that I think about it, but at the time it seemed totally dope. First off, we ran around with these colossal cameras on one shoulder and a Samsonite full of VCR parts hanging off the other... VCR, Video Cassette Recorder. You know, those rickety brick like devices your parents used to play reruns of Barney on. You know, Barney - big purple dinosaur, first openly gay children’s show host. Anyway, we’d have to bring a bunch of these like, huge tapes with us, ‘cause once you filled them up, there they were. I mean, you could dub the stuff over to another tape but it took forever and the only draggin‘ and droppin‘ going on were the ashes falling off all those cigarettes they used to make us smoke.

Oh, and get this: All the microphones had cords hanging off them. No joke, they were physically attached to the recording deck. On shoots we’d be tethered to each other, me with the camera and deck, you with the big-ass microphone. On walk-downs and such, camera crews would get all tangled. It wasn’t at all uncommon to spend ten minutes afterward untying yourself from the other schlub sportin’ forty feet of cable. If you weren’t careful, you could even trip a civilian or worse yet, a cop! I once took a bailiff out at the knees during a gang-bang, thought I was gonna spend the weekend in the pokey. And then there were the lights. We used to attach these big ole landing strip lamps on-top of our cameras, then strap on a battery belt just to power them. A battery belt! A belt made of batteries! I shit you not.

Of course it really wasn’t all that bad, since we only had, what, two or three newscasts a day. Hell, if a ballgame or show went long, the studio crew would tape it in advance and cue it up for later. Can you imagine? News in a can? Of course back then stations still signed off at night. Yeah, around midnight they’d just throw up some horse blanket and chill ‘til dawn. No infomercials, no dirty 800 number spots, just a still image and - get this - tone. TONE! they’d blast that right intro people’s homes like it was some kind of air raid. I’m tellin’ ya, it was whack! Good thing was we rarely ever went live. Stations only had one live truck a piece back then, not a fleet like now. Yeah, back then if you were going live, there had to be a plane crash or a submarine hunt or some kind of cop car convention, Not like now when any old city council meeting attracts a satellite farm out back, I remember when we first got our - Hmm? What’s that? You’re trying to track audio?

For years I hid behind the lens and a twenty yard stare, racing from wreckage to spectacle with the same lack of concern in my eye. These days however, I cannot pretend I don't care like I once could, especially when confronted with such evidence of malevolence. Meet 'Chamberlin', a hapless lab mix who, until very recently, was left chained to a tree in High Point. For at least two months he laid there, until his limbs constricted and his muscles atrophied. Animal Control Officers found him in an abandoned yard three weeks ago, along with another mutt so forgotten, so withered, so delirious - authorities had no choice but to end his pain. The grim discovery made headlines and led newscasts, competing with another equally queasy animal abuse case involving a burned puppy. I caught it all out of the corner of my eye, but managed to avoid close contact with the atrocity of the week by wrapping myself in a protective bubble of soft news.

That is, until today,

You ever hovered over a neglected pet as animal techs worked his diminished limbs back and forth, back and forth, back and forth? It's enough to make you drop any pretense of cynicism as you hold a tight shot of the creature's plaintive stare, enough to make you pity people who say there's no real evil in this world, enough to make you sit in your car for a good fifteen minutes before cranking up the engine and driving away in silence. This isn't my first brush with animal abuse. I've ridden along with dog catchers as they collected cadavers, watched other officers wrangle hoarded cats from apartment buildings, seen horses so underfed you could trace their internal organs. I've negotiated those cases with an unhealthy dose of indifference. Sure, it made me sad, but I always found a way to stave off the knavery. It helped that I wasn't much of an animal person myself, having never really had a pet that forged that kind of visceral connection with another species' soul.

Then my bride brought home this guy and everything changed.

Now I find myself rolling on the floor with a certain pooch, slinging nicknames and kisses as the world's silliest poodle mix tries to prove to me he's a total bad-ass. This wiggly addition to the Pittmans has enriched my life (and marriage) in more ways than I could ever have imagined. Why it took me 43 years to forge a bond with an animal is complicated of course. Just know that the reasons melted away whenever the little yapper we call 'Ollie' first put his head on my knee and looked up pleadingly. that's just the look Chamberlin gave me today as his caregivers praised his every push across the floor in a specially made canine cart. I managed to keep my eyes dry as I twisted the glass, but the sight of this dog's broken body seared into my vision, as if I'd witnessed all those other animal abuse cases behind protective goggles. Still, I stuck with it, knowing my efforts would result in another update and give my station another reason to spell out the names of the couple thought responsible for laying waste to this innocent creature...

Way I heard it, he straight-up FREAKED. Went from total comatose zone-out at some L.A. press conference to stark raving nut-bag. Guy I know who was there said he suddenly crawled up some entertainment reporter’s back, snatched a red-hot bulb out of some guy’s light and ATE the damn thing! After that he starts yelling about the live trucks not being gassed up, then threatened to take a weatherman hostage if people didn’t hoarking his food from the station’s refrigerator. Everyone just kinda stood there and watched; I mean, how often do you see a cameraman go mental? Wait, don’t answer that - I got kids to feed. Anyway, none of the crews got any footage of the freak-out. Guess they were too busy eyeballing all the Double-AA’s he spilled when he knocked over that run-bag. It wasn’t until he started snatching press passes that someone tried to tackle him.

That beefy stringer from across town almost got him in a Figure Four, but Sean somehow slipped out of his grip and dog-piled the podium. Too bad about that city council lady. I’m sure her clavicle will pop back in place. Hey, I wouldn’t have believed it myself if the surveillance tape hadn’t surfaced. Did you see dude take off after he got back up? Seriously, WHO even tries to moonwalk in 2010? Too bad, too. Sean’s always been a little loopy, but he’s no crazier than that dude who keeps calling the newsroom asking for Mr. Green-Jeans... Anyhoo, they say he’d have probably gotten away had Animal Planet not been shooting some segment outside. Yeah, some llama wrangler winged him with a tranquilizer dart. They found him curled up under his news unit, babbling about running sound on a Mork and Mindy episode. Not really sure what happened after that, but from the look of his mug shot, he’s gone Total Nolte --- Hmm? What's that? It’s just some lame publicity shot from a Law and Order junket?

I Know Why the Caged Clerk Sings... 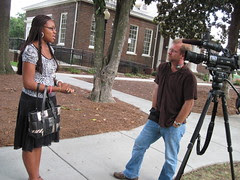 You know that sequence in the local news where three random people pop up on screen and comment on the subject at hand? It’s the dreaded Man on the Street interview, of course, a newscast crutch favored by lazy reporters and producers who never leave their cubicles. Personally, I’d rather dry-clean my spleen than solicit the opinions of those too uncoordinated to avert my gaze, but sometimes it’s just unavoidable. Take the other day, for example, when I was forced to loiter at the corner of ‘No Comment’ and ‘Back Off, Furball!’ for what felt like a lifetime. Okay, so it was only 45 minutes, but when you’re questioning pedestrians, time draws out like a blade.

Once upon a time of course, any self-respecting shooter could hide behind the glass while his /her prettier partner quizzed the homeless about nuclear proliferation, but NO MORE! Actually, I’ve been polling folks solo since Bush the Elder was throwing up on foreign dignitaries. Jeez, drop a few one-liners in the morning meeting and The Suits just assume you’re a people person. Truth is, I’d rather play Wooden Indian than Game Show Host, but when a handful of meaningless soundbites are all that stand between me and lunch, the bodies are gonna fall! Or at least pause in front of my lens long enough to hold forth on why the city won’t pinstripe the bike lanes, or how they feel about the new flavor of urinal cakes or some other such manure we foist upon a suspecting public.

Does that sound bitter? You’d be a little edgy too if you found yourself panhandling for points of view on such a regular basis. Worse yet, I’m pretty good at it! Maybe it’s hereditary. My father, a verbal wordsmith if there ever was one, could talk a junkie out of his fix. Me, I only got a fraction of his powers of persuasion, but two decades on the streets how to profile the garrulous, where to eye-gouge the reticent and when to simply let the logo do the talking. When all else fails, I can always fake a seizure and hoodwink some good Samaritan into weighing in on the pros and cons of using tasers in Sunday Schools. Sure, it’s politically incorrect, but when you’re eyeballing Goth Kids and Grannies for the very same reason, manners are the first thing to go.

Now if you’ll excuse me, there’s a college kid in front of the toy helicopter kiosk that deserves my undivided attention and - if he’s lucky - a complimentary pretzel from that weirdo down the Mall.
Posted by Lenslinger at 9:35 PM No comments: