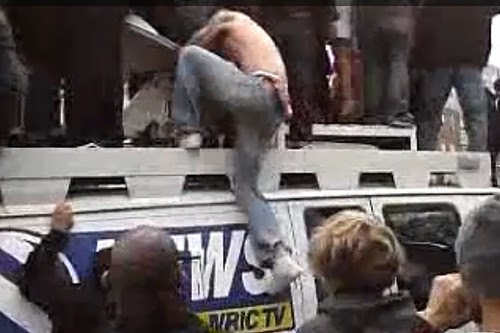 While no fan of live trucks myself, I can't imagine scrambling up the side of one as three thousand of my closest friends chant the initials of a university I couldn't get into. Speaking of which, should YOU ever find yourself preening over a boozy mob like some shirtless King of Sop, do take a moment to review your goals in life - if not your immediate fashion choices. Apparently, no one in Richmond stopped to think of anything after VCU's unlikely rise in the Final Four sent a street full of Virginian's into an O.J. like frenzy. Okay, so no one lost their head - but dignity did die a thousand deaths as a band of jabronies decided to summit a WRIC live truck. Much bad dancing followed. Somehow, this arrhythmic act sated the crowd, providing irrefutable proof of their team's round-ball dominance. Ooooo-kay. Just be careful with your flash mob, there. You might break into a halfway decent moonwalk only to have some portly schlub in a utility vest reach up and slice your Achilles tendon with his rusty Leatherman. I'm not saying it's right, only that there's enough suppressed rage behind the wheel of the average rolling billboard to erase an entire city block full of athletic supporters. Remember, Sports fans...

Except the Camera Guy...

Posted by Lenslinger at 3:44 PM No comments: 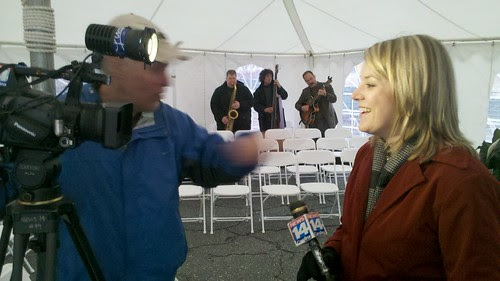 Bill didn't care what their little jazz trio was called, Stephanie's cousins WEREN'T gonna follow them around all day!

Okay, so they're not Stephanie's cousins, but Wally West, Matt Kendrick and Wiley Porter can come to my family reunion any day, since they chew with their mouths closed AND play kick-ass Jazz. I tell ya, between the (incredible) Sharon Jones and the Dap Kings concert I went to Saturday night and running into Wally today, I'm beginning to realize what a fan of brass instruments I am. This in itself is strange, as I grew up the younger brother an amateur trumpet player. I'm not saying it scarred me, but to this day the faintest whiff of a Herb Alpert solo makes me lunge for something grungy. I find early Soundgarden to be a suitable antidote. But this post ain't about music.

That's what I felt when I schlepped my gear into the VIP tent this morning. All the way over I'd been grumbling to the News Gods about what a cliche they'd created with the groundbreaking. Really, the products of those staged affairs may make for great lobby tchotchke, but as television they rank right below ride-alongs with the Amish vice squad. Actually, THAT would make for pretty interesting Tee-Vee, but a gathering of suits and golden shovels? It's enough to make you want to leave the fancy camera in the car and record the damn thing door to door with an Etch-A-Sketch. The prolonged podium gloating, the endless acknowledgements, the high-gloss hardhats -- it's a presentation I've slept through a thousand times before. There's only ONE thing that could make a scene like that worse...

Which is exactly what I awoke to, a mere eighty minutes before the speaker was scheduled to begin recognizing every single elected official in the crowd. I could just hear the predictable patter as I watched a woodchuck float past my bedroom window on an upturned Frisbee. %&$@%! With my luck, they probably wouldn't even rent a tent! How wrong I was. Not only did the hospital spring for a tent to announce their expansion in, they hired the official sax player of this very website to chase away the doldrums. Wally even stopped playing long enough to give a salute when I walked in. How cool was that? Almost enough to make up for the fact that all that jazz drowned out most of my soundbites. Still, it served as a musical reminder that life doesn't always suck the way we think it should.

All the World's a White-Balance 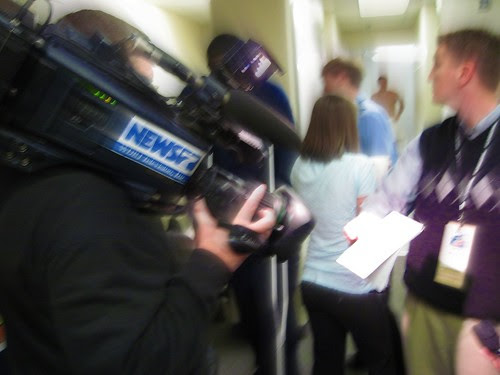 It's about as sexy as changing the batteries in your smoke detector, but skip it just once and your whole day could go up in flames. I'm talking about the lowly white-balance, that in-camera calibration that separates the cameramen from the fan-boys. Sometimes a push-button, but most often a toggle, this seminal switch can unmake your day faster than a traffic reporter hopped-up on fender-benders. Ahem...let's review the science. Embedded deep within each and every fancycam is some metallic doohickey that can't judge color for shit. Thus, a persoanl asist of sorts is needed each and every time you fire that puppy up. It's easy: just find something white in the room/submarine/typoon you're shooting in and point the camera at it. Press another button and the camera shuffles through color cards from the mini-series ROOTS before finally deciding precisely what white is. Seconds later you're own your way, smug with the knowledge that your fancycam damn well knows the difference between taupe, puce and of course, magenta. As such, all colors will properly stick to the tape, all will be jake and at no time will the Smurf word be used... Until you wander into another room/submarine/typhoon, at which point you have to start the whole needlesome process all over again. Got it? Good!

I'm happy we've had this time together. Ya know, other than just running my mouth non-stop, I really want to establish the Lenslinger Institute as a place of higher learning, where photog fashion and camera-mannerisms can be studied by shell-shocked survivors of the Fourth Estate. I just hope I wasn't too technical. I mean, sure, I could delve into coor-temperatures and the Kelvin scale, I could prattle for endlessly about where to white-balance in brackish light. I could even devise some sort of miniature flow chart that young news shooters could stuff into their cargo shorts pockets, you know, the ones filled with dead Double-AA batteries, Cheeto dust and travel bottles of AXE body spray. But what good would that do? A new photog has to repeat every error in the book at least twice before he or she remembers to search endlessly for spare square inches of hue-free real estate. It's more than a technical setting - it's a rite of passage! Why, I remember the first time I white-balanced on a passing albatross. The sea was angry that day, my friend...
Posted by Lenslinger at 9:08 PM 3 comments: