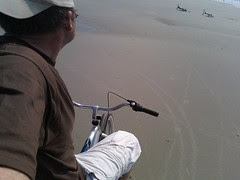 I savored much during my time away: sibling harmony, soul-sucking heat, the loving rub of sandy swim trunks. But of all the flotsam I wallowed in, none filled me with more joy (or saddle sores) than my beloved beach bike. Purchased three years ago on a whim, my wobbly steed cost no more than sixty American dollars; a fragment of what I paid for the tricked-out Trek currently moldering in my garage. But as low-rent as my velocipede may be, it's more than adequate for the mission at hand: ESCAPE. And escape I did, regularly abandoning my estrogen-laden nest for an invigorating ride around the island. I'm not not all that spiritual, but there's something about this simplistic form of conveyance that restores order in my version of the universe. It has always been that way.

Blame Evel Knievel, My mother does. Back in the 70's, whenever that tight-ass in white would jump something stupid on ABC Sports, my older brother and I would run outside to replicate it with cinder blocks and two by fours. We rarely succeeded, but it taught me how to fly over the handlebars of life with style 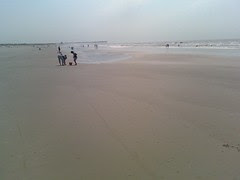 Back at the beach I hammered down, picking up speed as I worked the bargain bin bicycle through all three of its neglected gears. M ipod bounced along in a cargo pocket, sending Jack White's every guitar howl to the grainy earbuds wedged in my head. With the wind at my back I could really fly and for awhile I sat back, hands outstretched, and steered with my seat. Soon however stick figures turned into Moms, kids and joggers as I rocketed over hard packed sand, the crashing surf strobing by off my starboard bow. I kept pedaling and grabbed one side of the handlebar. Suddenly a cluster of beach umbrellas hove into view and I reacted without thought dodging whole villages with the flick of a single gritty wrist. I may have felt significant, but from any passing satellite, I was but one more crusty organism skirting the edges of the briny abyss. Not bad for sixty bones and zero upkeep...

A fellow photog turned me on to mountain biking a dozen years back. He showed me the root-laden ravines and hiccuping hillocks that serve as the basis of some really righteous rides. Soon I was hunched over a spinning wheel, my eyes unfocused as I experienced the kind of buzz some folk loiter on street corners to score. 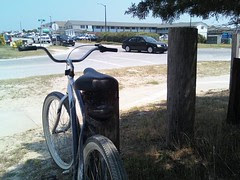 But my pedaling regiment was about more than mowing down shorebirds. I also played statue man in the town square several times a day. There I'd lean against a post, watching the cars, jeeps and minivans pour into the island as I collected specks of sand on my sunglasses and drops of bird shit in my hair. I can't say how long I manned those posts, or why - but the sheer pleasure of sitting still while nothing much occurred was highly therapeutic to this chaser of happenstance. Once, I even let a wailing ambulance pass by unmolested, though I did track it with my Ninja-like vision all the way to 37th street, which incidentally looks just like streets 1 through 40th, narrow graveled avenues crisscrossing a thicket of rental cottages. There as many sunburned folk milling about the streets as the beach and in crossing the board walk and doubling back I rode the risk of mowing down the same person twice on his trudge to or from the beach. Look OUT!

Yes, for a few years there I could truly call myself a 'mountain biker', as I churned and burned many an early morning and just as many dusks. My two-wheeled thrill was a guilty pleasure and I stole away to the woods as much as I could. But early middle age and a laundry list of excuses have kept me out of the saddle as of late... 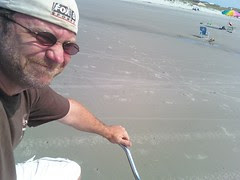 Not at the beach, though. No, there I'm Mister Bicycle, one more sweaty Dad on holiday whose found his happy place in the slow lane. I'm pretty sure I passed an insurance adjuster who was towing a giant crocodile float to achieve the same effect. The wraparound shades and black knee socks gave it away. Then again, who knows what (if anything) they say when I wheel by. My children, promising young women in the throes of adolescence, usually duck under a boogie board when they see me coming. That's cool. I used to hide behind the Galaga machine whenever my parents wandered past the arcade. 'Arcade': that's a word tat came and went. Not 'bicycle' though. Not as long as I've got flip-flops on my feet, females in my lair and feeling in my but-tocks.

I'd give it about fifteen more minutes...
Posted by Lenslinger at 7:05 AM 1 comment: